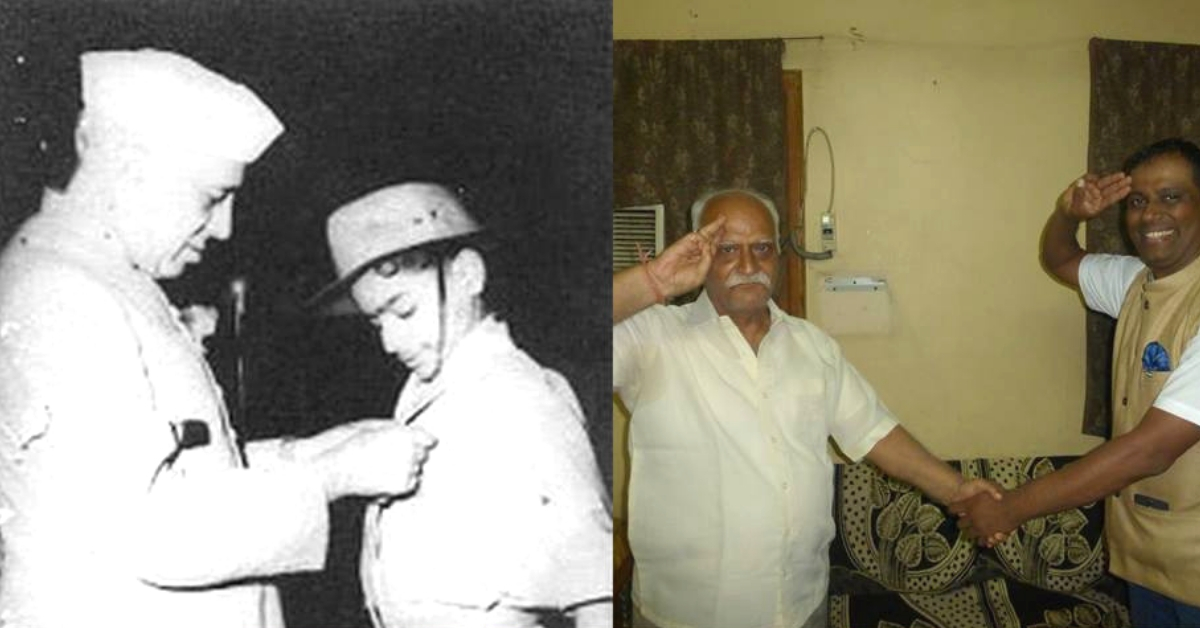 Harish being awarded by PM Nehru (left) and Harish in 2017. Credits: Shankar Vembu/Facebook.

The year was 1957, and Nehru was attending a Ramleela performance, where 14-year-old Harish, who was a Boy scout, was guarding the VIP enclosure.

Every year on November 14, the government announces the names of the recipients of the annual bravery awards. These are presented to around 25 children who are below the age of 16 years in recognition of their meritorious acts of bravery against all the odds.

But do you know how the awards came into being in the first place?

Very few people in India know about Harish Chandra Mehra, a resident of Delhi’s Chandni Chowk, whose bravery and quick action not only saved the life of India’s first Prime Minister, Pandit Jawaharlal Nehru but also paved the way for the government to institute Bravery Awards.

The year was 1957, and Nehru was attending a Ramleela performance, where 14-year-old Harish, who was a Boy scout, was guarding the VIP enclosure.

Suddenly, the tent caught fire, and while people in and around the enclosure were unaware of the impending mishap, Harish happened to notice it.

Risking his own life, Harish ran into the tent and took Nehru’s hand so as to rush him to safety. While most would stop at this, Harish returned to the blazing tent and fearlessly climbed the 20-foot pole. With the help of his scouting dagger, he cut off the burning cloth and saved the day.

However, because he did all of this with no protection, Harish’s hands were left in a severely burnt condition.

Touched by the boy’s sheer nerve and courageous act, Nehru decided to honour Harish at a national platform and his daughter, Indira, personally went to Harish’s school to announce his commendation.

On 3 February 1958, Harish was awarded the first ever National Bravery Award at the Teen Murti Bhavan by the PM himself—he was one amongst the two children who were awarded that year. The awards later became an annual feature.

You may also like: Here’s How the Young National Bravery Award Winners are Selected Every Year

Interestingly, Harish was the first civilian in the country, who was invited to lead the Republic Day Parade the same year.

Sadly, Harish had to bid goodbye to studies five years after the incident and had to take up a job to support his family. Still a resident of Chandni Chowk, where he is known as ‘Nehru ki jaan bachane wala bachha’ (The boy who saved Nehru’s life), a 75-year-old Harish lives in relative obscurity—his act of gallantry is known to very few across the country.

This Children’s Day, we remember Pandit Jawaharlal Nehru and also the brave young boy who risked his own life to save the Prime Minister.