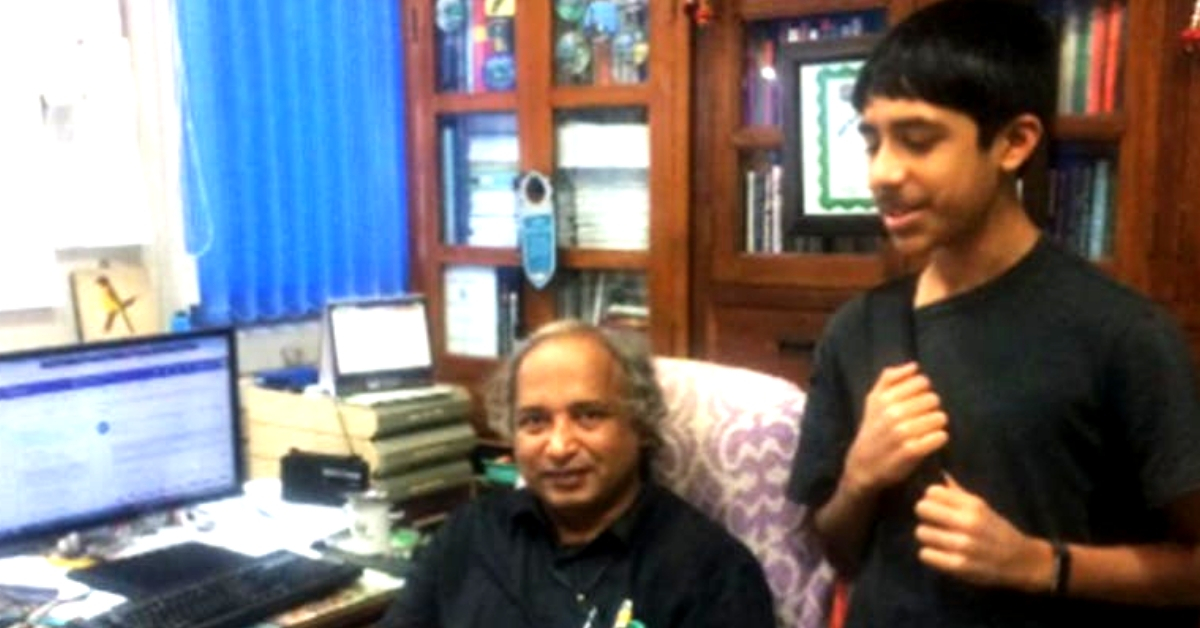 Much has been said and written about Bellandur Lake. But this Class X student is actually doing something about it!

#ChildrenForThePlanet: This Children’s Day, TBI will be celebrating young innovators who are taking steps big and small for a sustainable future.

It is incredibly tragic that Bengaluru’s largest lake, which is located in its south-eastern suburb of Bellandur, has become synonymous with the destructive effects of unplanned urbanisation.

With a massive spurt in housing and industrial construction following the IT boom of the late 1990s in the area surrounding the lake, the once robust ecosystem today resembles a stinking cesspool.

This problem particularly began to worsen in the early noughties when housing societies and nearby industrial units started dumping untreated sewage and industrial waste respectively into the lake. The indiscriminate dumping of untreated waste into the lake has had devastating consequences. Every year, the lake foams up, or its surface catches fire as a consequence of industrial chemicals in the water, leaving behind a disgusting stench, which is constant.

Earlier this year, the Karnataka government allocated Rs 50 crore from its budget towards the rejuvenation of this lake, but according to experts, even this sum may not be enough.

15-year-old Gautam Dayal is a student of Class X at the International School, Bangalore (TISB), and lives in an apartment complex situated in the lake’s catchment area, along with his family. Inhaling the fumes emanating from the lake every day, he found the apathy of local authorities finds hard to endure.

Unlike local authorities, however, Gautam wasn’t merely interested in complaining and twiddling his thumbs. He started extensive research about the lake and found that there was a lot of information available, but it was scattered.

Last August, he signed up for the 1M1B (1 Million for 1 Billion) Future Leaders social entrepreneurship programme along with nine other students from his school, where for six months he learnt the structured art of problem-solving and the necessary presentation skills.

“As part of this, I was to identify problem areas, select one area to focus on and then come up with a solution, validate it, and then execute and demonstrate impact. I came up with a few problems: the lake, traffic, civic issues…but helping to clean Bellandur lake was what resonated with me personally,” said Gautam, in a conversation with YourStory, on March 31, 2018.

Backed by his deepening interest in coding, photography and birdwatching, Gautam began the process of building an online community of other stakeholders living or working near the lake through his website. “I want to interact and talk about this more and more so that there are millions of hands coming together to work for the rejuvenation of the lake,” says Gautam, in another conversation with Bangalore Mirror.

How did he come up with the idea of setting up a website?

For starters, he spoke to many activists, concerned citizens and scientists deeply involved in the fight for Bellandur Lake, and realised an important thing—the lake needed the total involvement of the local community, without which any effort to clean up the lake would fail.

“So, I thought of creating a web platform and community to unite citizens, teens, experts, and even government bodies around the lake and its issues. My idea is to encourage more involvement and excitement about the lake among citizens, and especially among teens. I also wish to feed information to other lake groups and media and influence legislation. This should also make the government more accountable,” said Gautam to YourStory.

Thus, began Gautam’s community-led ‘Save Bellandur Lake’ initiative. Besides learning about how to approach civic problem-solving from his stint with 1M1B, he also reached out Seema Sharma, a citizen activist involved with the lake and solid waste management living in the same apartment complex, who helped him with information about the lake and got him in touch with experts. For the development of a community website, he received assistance from entrepreneur and former Amazon engineer Sunil Bhatia, who continues to advise him on the initiative.

However, Gautam is still a Class X student, and with board exams on the horizon, he has taken a slight step back from the initiative. Helping him with the workload for this initiative are other friends, and their mothers, while he manages academic workload from school.

Trawl through their website, and you’ll find multiple interviews with experts on the lake, activists, lake conservation groups and scientists like Professor TV Ramachandra from the Indian Institute of Science. From just one apartment complex in the vicinity of the lake, the campaign has spread its wings to other citizen groups, and in coordination with them would often conduct cleaning drives or walks for people wanting to know more about the lake.

Beyond these resources, the website also offers a platform for citizens to voice their concerns, opinions and upload photos or videos of the same, establishing a sense of participation.

Also Read: This 11-YO Whiz Kid from Hyderabad Teaches Designing to Engineers for Free!

In the future, Gautam seeks to conduct more offline events, while raising traffic on the Save Bellandur Lake website. With more than 2500 followers on Facebook, the community is constantly growing, and Gautam hopes that there will be a time when other similar conservation groups use his website for their community outreach initiatives.

Besides, there are also plans for a monthly news digest detailing the status of clean-up efforts while giving residents a platform to pressurise authorities into doing their job.

“What we see in Gautam’s idea is the skill of an influencer, trying to bring people together for a cause. That is what we try to do [with students]. Now, if he gets selected, he will be one among the top 3 to present and represent the country in addressing environmental issues,” said Manav Subodh, co-founder of 1M1B, to Bangalore Mirror earlier this year.

This is the spirit driving a 15-year-old’s bid to clean up the lake. What’s your excuse?