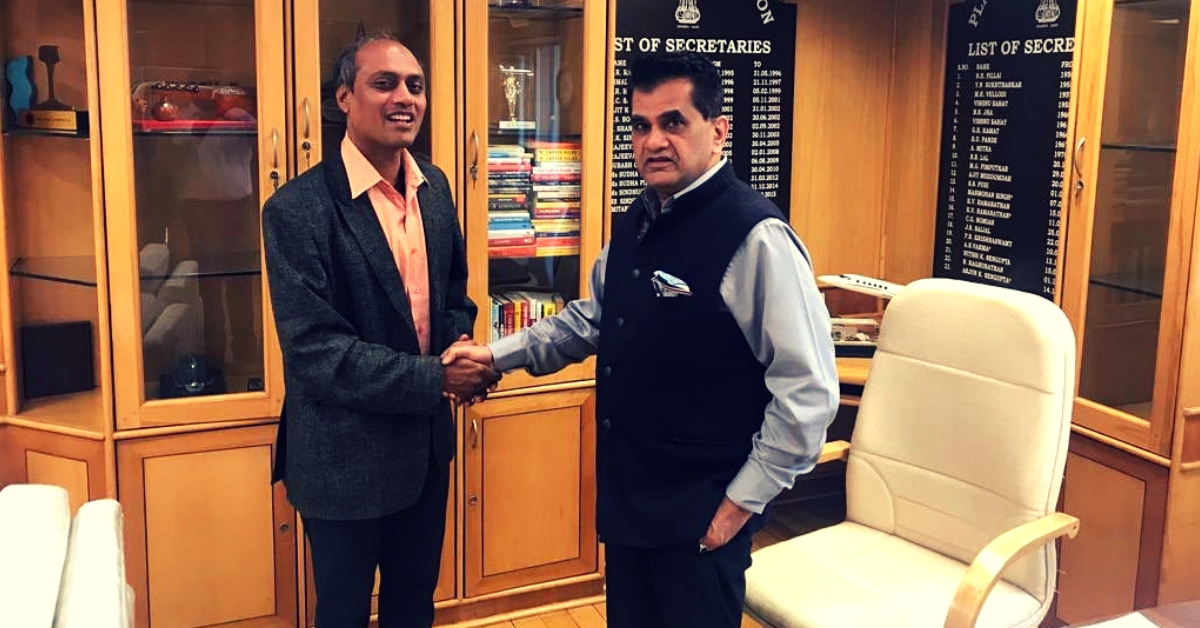 From sleeping on the footpath, studying under the streetlight and working as a paanwala for 12 years, Ganesh Hingmire, today, is a national award-winning legal expert on Intellectual Property Rights and Geographical Indication.

For most of his life, Ganesh had not only known but also lived in crippling poverty. Living in a joint family in a 10×10 sq.ft rented home in Old Pune’s Budhwar Peth, his world came crumbling down when his father passed away.

Ganesh was no older than six at the time. Left grieving with his younger brother (then three years old) and his widowed mother.

To make ends meet, she started rolling and selling papads for a living.

But even in the difficult time, his uncle, who was a freedom fighter became his confidante. A self-made man who refused to take any incentives or benefits such as land and pension entitled to freedom fighters, he had a lasting influence on Ganesh’s life.

He often told Ganesh how education would help him beat all odds. “He would tell me to use my education to help our country,” recalls Ganesh.

From sleeping on the footpath, studying under the streetlight and working as a paanwala for 12 years, Ganesh Hingmire, today, is a national award-winning legal expert on Intellectual Property Rights and Geographical Indication. 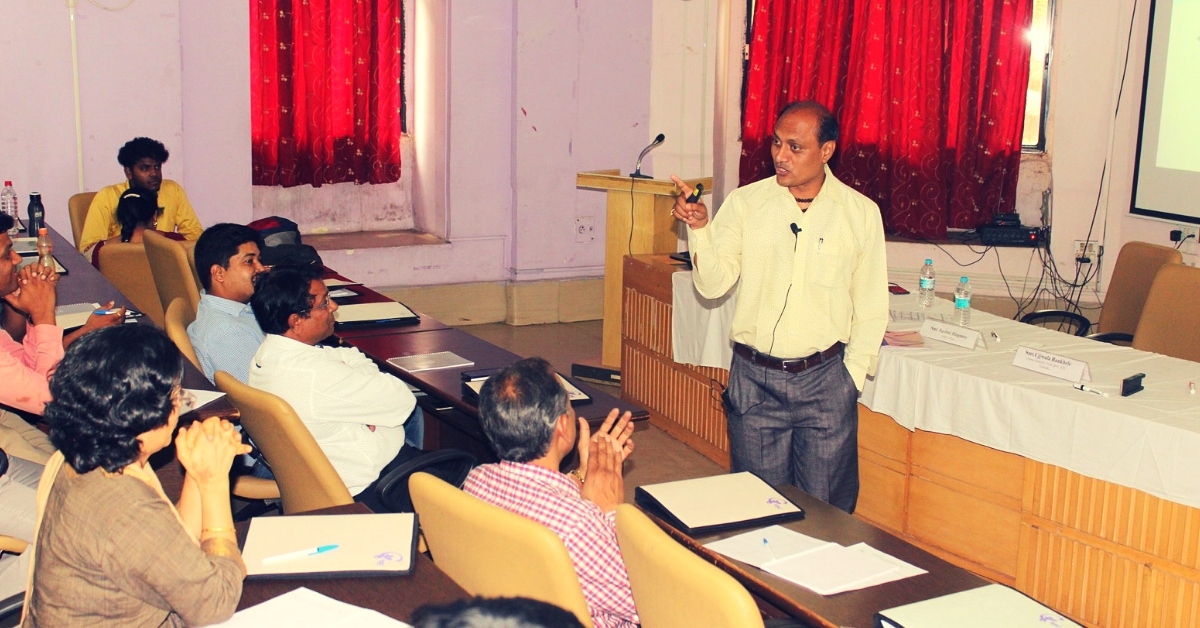 In an exclusive interview with The Better India, he narrates his story.

“My father’s death created a void in the family. We were financially unstable. An accident crushed my uncle’s leg, and a plate had to be inserted to fix it. He had to start a shop where he wouldn’t need to stand for long hours. We set up a paan shop close to the yesteryear Vihayanand theatre. I would study when the film shows ran, but as soon as the film got over, I would sell tobacco and paan to the customers.”

Hingmire grew up close to the red-light district. The school he went to had one teacher per class who would teach all the subjects. The objective: that kids from the infamous locality would at least learn to read and write. With no ground, Nutan Samarth Vidyalaya was a small duplex building for students till class seven.

“I remember we couldn’t even afford to pay the Rs 7 monthly fee. When we did not pay the fees for months, Aai was called to the school office. When they asked her about this, she burst out crying, saying, ‘We are struggling with a square meal, how do we afford the fees?’”

Because Ganesh was a bright student, the school cut down his fees to a meagre Rs 2. This helped him move on to study further after Class 7, and he topped the locality when his class 10 results arrived.

He would run seasonal businesses to sell crackers, Ganapati idols and water bottles to finance his BSc degree in Chemistry. For every curveball life threw at him, he faced it with unmatched rigour, refusing to give up.

“I made friends who would study with me under the streetlight and go to sleep with me on the pavement itself. After completing my BSc, I had the opportunity to open an STD booth in 1996. When I got my first salary, I told my Aai that she wouldn’t have to work again. It’s been over 22 years since, and she’s never had to work a day.”

It was a friend’s mother who suggested that Ganesh study law if he wanted to help the country. And that is exactly what he did. His academic record helped him get selected to Pune’s prestigious Indian Law School.

Another friend told him how going abroad may give him an edge over his peers. Thus began his journey from Old Pune to England.

When Ganesh asked a bank for a loan of Rs 4 lakh, they refused as he had no guarantor. But a letter from an MP to the Ministry of Finance helped.

He spent a year at Cardiff University, pursuing an LLM in commercial law, specialising in Intellectual Property Rights (IPR) in 2001. Even at a time when he stood among the top ten students at the university and had a job in his kitty, Ganesh did the unthinkable.

He decided to return to India, to bring the knowledge of IPR to the country. Little did he know, that this decision would facilitate his journey as a changemaker.

And while you may be familiar with what filing a patent is all about, here’s what you need to know about Geographical Indication.

If your answer is Mahabaleshwar strawberries, then you have the definition of Geographical Indication right there.

“What makes it unique? The source area it originates from, its nutritive value, perhaps? Often, many such crops and other kinds of products do not get the fair market price, solely because they do not get their deserved recognition. Getting Geographical Indications can help boost their markets, helping farmers and artisans with an opportunity to increase their income.”

From the Puneri Pagdi, Paitani saree, Mahabaleshwar strawberry, Kolhapuri jaggery, Nashik grapes and even the dying Ambemore rice variety, his efforts in the last two decades have revived markets for agricultural and other products.

Apart from teaching students, the professor has travelled over 12 countries to attend conferences and give lectures on the importance of IPR and GI, supported by the Government of India.

His two papers on Geographical Indications (Communities Intellectual Property) issues have been recognised by the World Trade Organisation (WTO) Secretariat and published on their website. He travels the globe as its representative too.

Prof Hingmire has published articles and authored two books, travelling across Maharashtra to train university professors as well as senior bureaucrats like IPS and IAS officers about IPR. He adds how IPR shouldn’t just be looked as an optional subject but a tool for economic growth.

“When I travelled across Mulshi and Mawla in the Sahyadri range, the Ambemore variety of rice was on the verge of extinction, so was the original art of Paitani sarees. Because neither the farmers nor the artisans got a fair price. They lived in abysmal poverty, struggling for basic needs like electricity. But GI helped change that. The Ambemore rice is so nutritious that people in the villages feed it to the newborn child even during the period of lactation as it builds immunity. But nobody knew that until a GI was filed.”

Similarly, he talks about the grassroots innovators who do not have the knowledge or agency to filing patents. Hingmire’s organisation, Great Mission Group Consultancy, which is a group of legal professionals, scientists and academicians, advocates Intellectual Property Rights and the enforcement of Geographical Indications.

Read More: Meet ‘Guitar Rao’, an Engineer Who Quit a Cushy Job to Give Music Lessons for Re 1!

One such example is of a Pune-based engineer who was helped by the group in filing a patent for an electric foldable bike, following an eight-year struggle. The green bike can be folded and assembled in eight minutes!

From being a paanwala to becoming a National Intellectual Property Awardee, Ganesh Hingmire’s journey is a true testament that education and hard work have the power to change not just one life but also that of entire marginalised communities.

If this story inspired you get in touch with Ganesh Hingmire at gmgcindia@gmail.com.