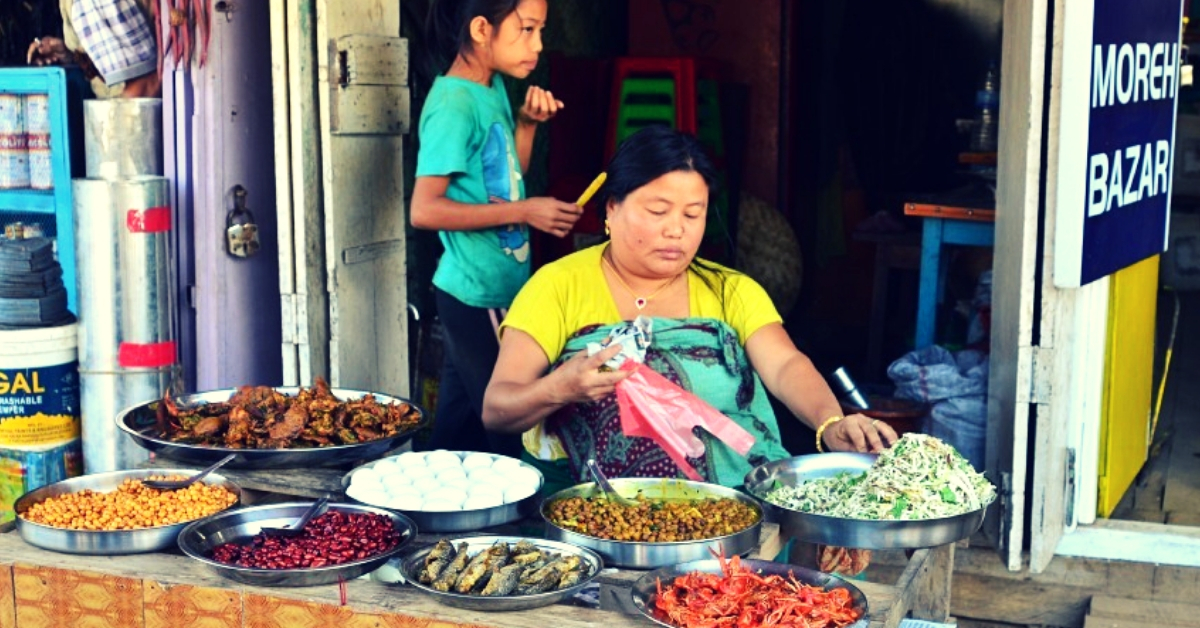 Moreh is a strategic point for both India and Myanmar, but what is truly interesting and intriguing is the amicable relationship that exists between people on both sides of the border.

Located on the border of India and Myanmar, the sleepy town of Moreh in Manipur is unlike any other border town across the country.

Besides being India’s gateway to Southeast Asia, Moreh stands as a testimony to a rich, cross-cultural heritage that isn’t just limited to language or attire but something that has deeply woven its influence into the way of life for people on both fronts.

Moreh is a strategic point for both countries, but what is truly interesting and intriguing is the amicable relationship that exists between people on both sides of the border.

This can be seen in the fact that one-day visits from either side are not only permissible but also feel like a short journey to a town next to your own—but with the mandatory requirement of carrying a valid identity proof and not a passport or visa!

Likewise, people from Myanmar have the permission to visit Moreh for a day through similar arrangements.

A day pass from Moreh lets an Indian explore the market towns of Namphalong and Tamu in Myanmar’s Sagaing region, which apart from a large Buddhist population, is also home to many Nepali and Indian settlers.

Besides adopting Burmese customs and citizenship as their own, these folks have also played a central role in maintaining close and amicable relations across the border.

As travellers cross the Indian frontier and enter Myanmar through the checkpost of Namphalong, what awaits them is indeed a heart-warming sight—a gate of friendship.

From here starts a pathway to a unique culinary experience—a scintillating mélange of the Indo-Burmese food palate.

For those who bank on culturally driven travel pursuits, this trail will open a whole new world of culinary experiential travelling where every dish that you come across is like venturing into an unknown yet seemingly familiar territory.

Take, for instance, the ‘thohk’ stalls that you will come across in plenty after crossing Namphalong checkpost. While these salad-like delicacies bear a close semblance to the Indian ‘chaat,’ they come in flavours and textures that are unlike anything we have tasted before!

Out of all the dishes here, the Thimbodheeto and Lapetto are definitely worth trying! While the former comprises strips of steamed chickpea flour, sliced cabbage and chillies that are tossed with a tongue-tingling mix of local oils, powders and sauces, the latter is an even tastier mixture of tomatoes, nuts and chickpea flour that is sautéed in an array of locally made aromatic fish sauces and lemon juice.

While venturing down these streets for food, language might emerge as a barrier but don’t let that take away any fun!

The best chance you can take is to let the person behind the stall decide, for, after all, travelling for food is all about experimenting with an open heart, and every new dish you try is yet another culinary journey in itself.

If you happen to visit Moreh, do not miss the opportunity to make a one-day detour to Namphalong and Tamu. We solely speak for an unforgettable culinary experience that stands out as much as the Indo-Burmese cultural confluence one gets to witness in the region.

You may also like: These Stunning Photos of Manipur Will Make You Want to Plan a Trip Right Away!

Additional information: With a nominal entry fee, the day passes can be easily acquired using authorised identity proofs like the PAN card, Aadhaar, passport or even voter’s ID that needs to be deposited at the Myanmar checkpost. However, these passes come with time restrictions, with checkposts opening at 7 am every morning and closing by 4 pm, IST. Which means you can’t stay over at Myanmar for the night and have to return before daybreak.