Meet the Man Who Has Cleared Almost 4,00,000 Kgs of Waste from the Himalayas! 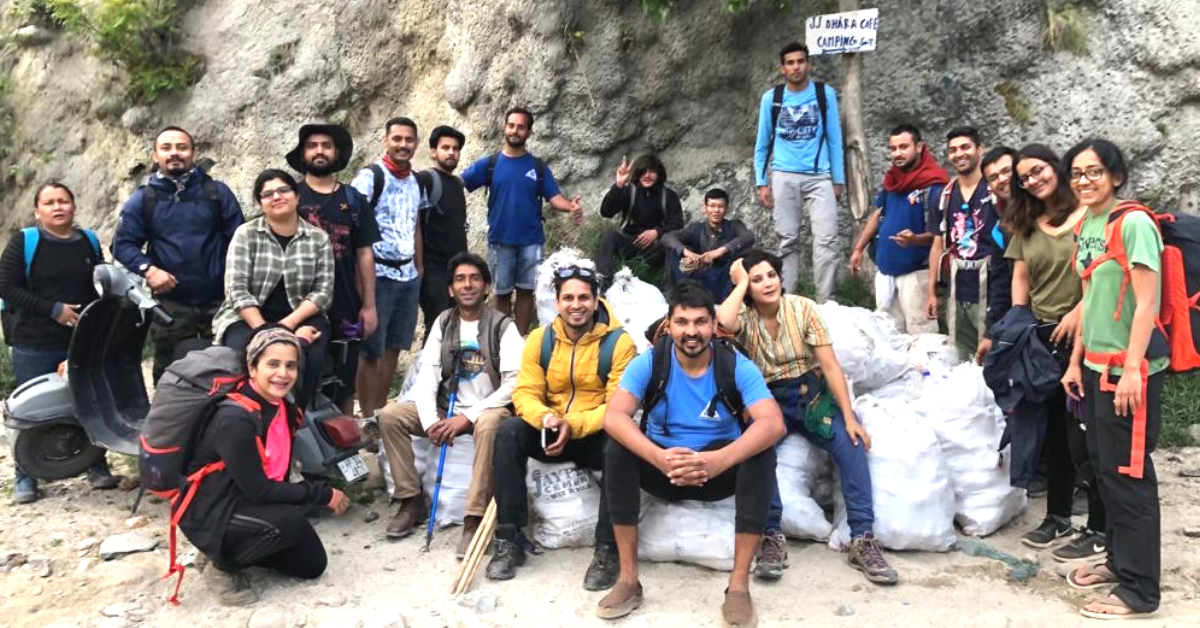 In an attempt to retain the beauty and the pristine greens in the Himalayan region, Pradeep Sangwan started an organisation, which he aptly named ‘Healing Himalayas’. Having always been a city dweller, his decision to move to Himachal Pradesh in 2009 came as a surprise to those who knew him.

Most of us like visiting the hills during the holiday season. The pure air, the greenery, and the simple living of the people in these regions is what attracts us. One other thing that we all indulge in is clicking selfies amidst all this beauty.

Now imagine your selfie cluttered with a garbage heap in the background, would you like that?

While the increase in the number of tourists visiting the hills has done wonders for the local economy, the pollution levels, especially the discarded plastic waste, is also increasing rapidly.

In an attempt to retain the beauty and the pristine greens in the Himalayan region, Pradeep Sangwan started an organisation, which he aptly named ‘Healing Himalayas’. Having always been a city dweller, his decision to move to Himachal Pradesh in 2009 came as a surprise to those who knew him.

Having studied in the military school in Ajmer, discipline was something that came very naturally to Pradeep. Like his father, it was expected that he would also join the armed forces and serve the nation.

However, life had different plans for him.

While in college, Pradeep took an interest in trekking, and that was the beginning for him. He says, “Bollywood plays a huge role to play in popularising the hills. Movies of friends going on holidays to trek and finding themselves on these adventures have inspired many to come here.”

He continues, “When I moved here bag and baggage almost nine years ago, I had no idea what I would do. It all took a while to come together.” One of the first things that he did was to start a homestay in Manali to support himself.

The locals and their sustainable lifestyle

“The villagers revere nature. While they are not educated in the formal sense of the word, they certainly know how to care and protect the environment they live in,” he observes.

He goes to say that the practices that most of the villagers followed were all very eco-friendly, such as cooking in utensils that were owned by the community which left no need for plastic. Even the kind of food they cooked and consumed was natural and organic.

But somewhere along the way, influences from outside started creeping in, which altered their way of life.

The first winter at the hills

Recounting that first winter in 2009, he also recalls the sense of loneliness he felt. “I had moved to the hills without any concrete idea or plan of what I wanted to do.” He goes on to say, “The winds used to be so strong, nothing like what we are used to when in the city. Without realising how cold it would be, I set out. Everyone around me in the village knew the intensity. They were prepared with the firewood, the clothes, stocking up on ration etc. And here I was in my converse shoes trying to make my way through the snow.”

That was a big learning experience for Pradeep.

Along with a group of volunteers, Pradeep set out with jute bags to return with heaps of discarded waste along the trails. He says, “In an internal audit we did a few months ago, we found that we had collected around 4,00,000 kilos of non-biodegradable waste. This number would have gone up now.”

The waste that is collected is sent to two recycling plants in the state, where electricity is generated by converting waste. This is done with the help of the villagers. Healing Himalayas conducts special activities, mass clean-ups and events in the community and schools to create awareness about the maintenance and restoration of the environment.

The maximum footfall of tourists is in places like Manali, Shimla, Lahaul and Spiti. Over the years, the increased interest in trekking is also popularising other routes. “Many of those who come here to trek have no idea what to expect or what it even entails. They come here carrying loads of food in plastic containers, water bottles, and loud music. In their quest to have a good holiday, they spoil the place and leave it in tatters,” says Pradeep.

His quest is to ensure that people enjoy the place as it is, without spoiling it. In this regard, he offers a few tips to travellers.

1. Carry your own bottle of water

To give us a sense of how many bottles a family of four uses on a holiday of five days, Pradeep says, almost 25 bottles are used!

Imagine the amount of plastic waste you will help reduce if only you carried your own bottle. You will be able to refill it at most places and do your bit to save the environment.

You could consider buying the bottle for here.

An alien concept to us, we have adopted the use of straws as though it was native to us. Pradeep urges us to give up on the straw. While we may think that using one straw cannot harm the environment, it is the accumulation of straws that causes immense damage. So pledge to give them up.

When on a holiday or a trek, carry your litter back. Remember the image of the beautiful surroundings that you enjoyed and honour the trekker before you who was mindful and considerate in leaving it beautiful.

Let’s pay that gesture forward and ensure that we leave the route as clean as possible for those who come after us.

Over the last decade or so, the use of wet wipes has increased so much that it leads to a great deal of pollution to the environment.
Thinking aloud, Pradeep asks, “Whatever happened to using water and a towel?”

Healing Himalayas is in the process of raising funds to expand their scope of work. If you would like to help this organisation, click on the Milaap page or visit their website.