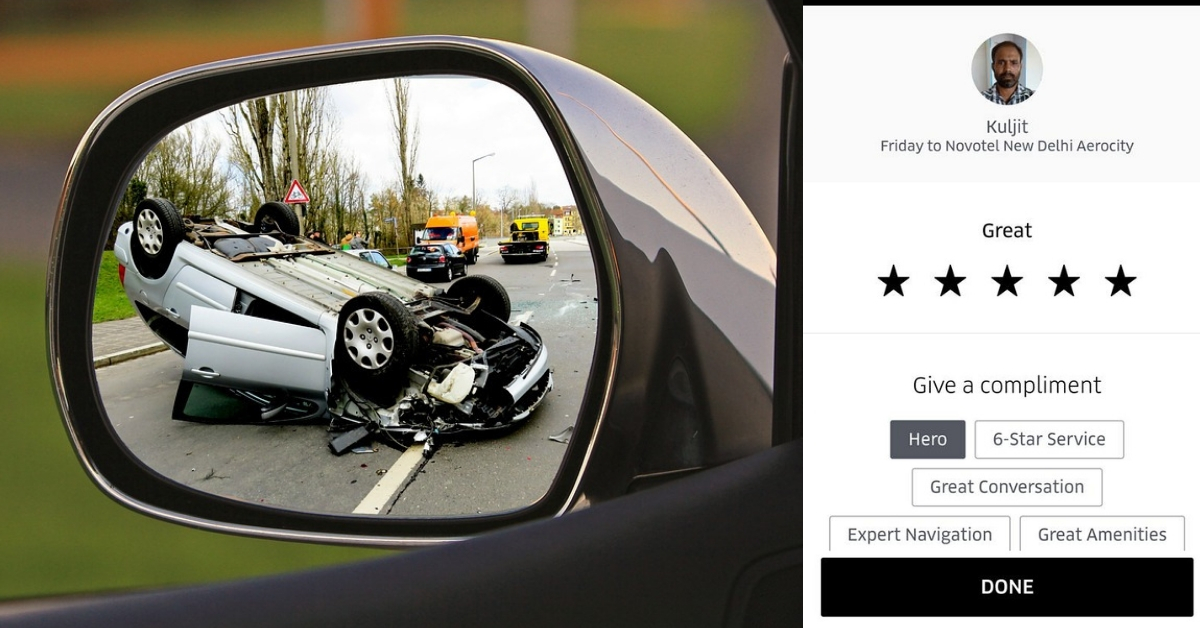 ﻿﻿Kuljit was driving his passengers Gaurav Jain and Himanshu Bharadwaj to Delhi’s Aerocity on the morning of October 5, when they noticed a mob surrounding a person in a severely injured state while crossing the Mayapuri flyover.

Across the world, thousands of people end up dying in road accidents every day. While the impact of the accident is undoubtedly the most important reason why they pass away on the spot, the unwillingness and apathy displayed by onlookers and bystanders, due to their fear of being harassed by the police and getting embroiled in legal entanglements, also, more often than not, leads to casualties.

However, there have been many instances where people have rushed to the rescue of an accident victim and saved their life. For these good samaritans, it is the person who takes priority over everything else, and this rare breed of people are genuinely worthy of respect.

Talking about good samaritans, an incident that took place last week in Delhi, where an Uber driver along with his two passengers went out of their way to help out an accident victim, will surely reinstate your faith in humanity.

Kuljit was driving his passengers Gaurav Jain and Himanshu Bharadwaj to Delhi’s Aerocity on the morning of October 5, when they noticed a mob surrounding a person in a severely injured state while crossing the Mayapuri flyover.

“Our Uber Driver Mr Kuljit notice the small girl n immediately stopped the car n started running near the spot, me n my copassenger followed him. We 4-5 ppl pick-up n carry that person from the divider, that guy (Mr Saini) who was driving the scooty without helmet, was still unconscious,” stated (sic) Gaurav Jain in a Facebook post.

Following this, they rushed Saini and his daughter to the nearest hospital and managed to reach out to their relatives as well.

You can read about the entire episode in Gaurav’s words here:

Today morning – I booked an UBER Cab(POOL) For Aerocity n picked up another passenger – Mr. Himanshu Bharadwaj From Pitampura who has to go to Gurgaon-
while crossing Mayapuri Flyover – We all notice an accident on the main road , it was crowded with 8-10 veichles and few people near the accident spot. There was a scooty lying on the opposite side of the road, one man – aged 25-30 years in unconscious condition with full of blood, face badly injured and fractured both legs, clothes all torned off with lots of blood was lying unconscious on the divider,
One small girl aged 4-5 years(his daughter), some other family has made her sit in their Innova car for some Time..

Our Uber Driver Mr. Kuljit notice the small girl n immediately stopped the car n started running near the spot, me n my copassenger followed him,

We 4-5 ppl pick-up n carry that person from the divider , that guy (Mr. Saini) who was driving the scooty without helmet, was still unconscious,

Mr. Himanshu took his daughter ( along with her school bag) in his arms n sit in front with driver, then people again started shouting, somebody go n sit with this guy (injured father – Mr. Saini)

I made up my mind on the spot, lemme sit with him and make sure we reach nearby hospital asap.

This guy(father) who start getting little conscious by now- full of blood n injured badly was crying n shouting on top of his voice, it was really scary n I was also crying (inside my heart) n getting very much emotional at that time, i started patting on his shoulder n telling him to relax “Don’t worry, your daughter is fine and we are taking you to hospital”

We reached under naraina flyover to search for nearby hospital n stopped when,
We saw a police gypsy , one police inspector who already came to know about the accident asked us that they will take this person to the DEEN DAYAL HOSPITAL, we immediately shifted him to the police van, but his daughter who was frightened n was crying, told us , that it’s her birthday today….n she herself got injured on her head n slightly on leg…

From her school bag , from her diary index page , We call their home phone number n inform about the accident,
Their relative (buaji n fufaji) came in about 10 mins, n we hand over his daughter to them n told them that police have taken her father to Deen DAYAL HOSPITAL.
I must appreciate that delhi police fully cooperate with us at that time in doing the needful,

Later, in the day we came to know from their family members that till 10:30 am , that guy was continuously crying and shouting in pain but nobody at DDU took any care,and no first aid given to him – I fail to understand WHY ??

Their relative taken him to some Pvt hospital in paschim vihar, get the stiches n various test done.

Tomorrow, most probably his surgery will be done- as he got multiple fracture on both legs.

I SALUTE n really thankful to that UBER TAXI DRIVER- Mr. Kuljit and my co-passenger – Mr. Himanshu for helping this guy n his daughter in doing the needful.

N I request everyone who are reading this to please wear helmet, wear seatbelt (if in car) and come forward and never ignore if you see any accident on the road, You might save someone’s life , n someone’s Family.

I feel proud to be able to help n also pray to God for this guy – to get well soon
Thanks to God for saving the life n for everything!!

Kudos to Kuljit, Gaurav and Himanshu for stepping in at the right time and saving Saini’s life, unlike the people on the road who chose to remain silent spectators to his suffering.