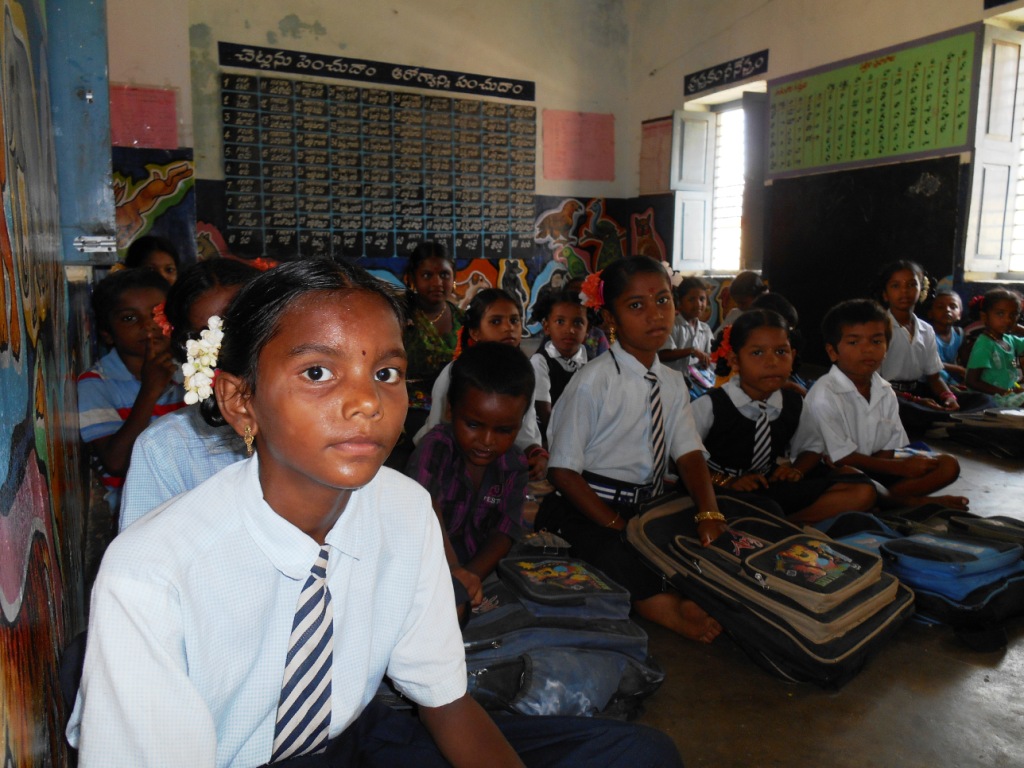 In Rajasthan, till now 14,555 schools have been involved in the implementation of Right to Education and 1,40,000 children have benefited from the advocacy efforts undertaken by officials from the Education Department as well as non-government organisations. (Credit: Pamela Philipose\WFS)
Promotion

While we mostly hear of instances where RTE is not being implemented properly, there are several cases in which it has greatly benefited the marginalised sections of society. Here are examples of the significant positive changes this Act has brought into lives of poor children in Rajasthan. From better confidence to higher grades, the students benefiting from this are gradually coming at par with the mainstream students. Here is how it’s happening.

In Dausa district, 55 kilometres east of Jaipur city, the state capital of Rajasthan, Akangsha More, 4, is registered in the nursery class of a local public school under the reserved quota. With her eyes tight shut, she sits to meditate along with her classmates on the terrace of their school, which is still under construction. Both her parents work as labourers in Jaipur and the little one stays with her grandparents, who are cobblers. Akangsha has got a shot at gaining good quality education thanks to a provision under the Right to Education (RTE) Act, 2009, which has sought 25 per cent reservation in private schools for children coming from impoverished homes.

Unlike Akangsha, her two sisters and brother were unable to utilise this scheme to their advantage because the elders simply didn’t know about it. “Even when we had gone for Akangsha’s admission, we had no idea of this policy. It was the school administration that told us that my granddaughter could gain entry into the institution and we wouldn’t have to pay the high fees,” says Ram Swarup, her grandfather, with a great sense of relief.

On her part, the child has not disappointed the family – in her, they see the hope of a brighter future for them all. Says Swarup proudly, “She is a focused and diligent child. When she comes home from school she gets down to completing home assignments and revising her class work. Only once that is done she has food or steps out to play.”

In a country where it’s not uncommon to find instances of discrimination against the weaker sections of society, the government, in a bid to offer equal opportunities to all, has enacted the Right of Children to Free and Compulsory Education Act, 2009, which, as is evident from the name itself, ensures free and compulsory education for children aged between 6 and 14 years. The RTE makes it mandatory for all government/aided/and non-minority unaided schools to have 25 per cent reservation for those who belong to poor, disadvantaged groups and face psychological and financial barriers while seeking an education. In Rajasthan, the scheme was launched in 2012-13 and uses the Sarva Shiksha Abhiyan (SSA) as the implementing vehicle with assistance from the UNICEF.

According to Sulagna Roy, Education and Child Protection Specialist at UNICEF, who has been overseeing RTE’s implementation in Jaipur district, “The government has enumerated six categories under the weaker sections of society for reservation. It is tailored to benefit the poorest of the poor at the entry level, which can be Lower Kindergarten (LKG) or Class One.”

Students like Akangsha have been enrolled due to the extensive advocacy efforts undertaken by officials from the Education Department as well as non-government organisations that have reached out to schools and the community, informing them about the provision. Till now 14,555 schools have been involved and 1,40,000 children have benefited from this move. Of these, 58.9 per cent are boys while 41.1 per cent are girls.

Headmaster Prem Ballab Khulve of the Government Upper Primary School in Jaipur’s Gopalpura Devri strongly believes that the reservation is helping children across Rajasthan’s 33 districts to realise their true potential. “It’s good for the child’s self-esteem. S/he can get greater exposure by interacting with students from different backgrounds. There was a time when poor parents couldn’t even dream of sending their children to an expensive private school. That’s not the case anymore,” he states.

Incidentally, the Act particularly provides for orphans, for whom the quota exceeds the 25 per cent limit. In Jaipur, Samarthan Sanstha has given a home to 27 girls and four boys, who, in the absence of family, used to work as domestic workers, garbage collectors, plastic sorters or beggars to survive. Nowadays, they all go to school. As Anand Acharya, a sadhvi (Hindu holy woman) who runs the facility shows off their notebooks with impeccable writing, shares, “Earlier, these children couldn’t afford to go to school but they are doing exceeding well in their studies.”

Indeed, the enforcement of this reservation is not bereft of challenges. Sunil Sharma, APC (RTE), Jaipur, talks about a basic problem they face, “In the cities, private schools have a high fee structure and the incentive of reimbursement from the state may not work for them. So there are higher chances of resistance on their part. Initially, the state used to reimburse Rs 9,000 per child per year. From 2014, the amount has increased to Rs 11,700.”

However, the difficulties don’t end there. Once these children are admitted, their teachers have to take on the mantle of finding ways of including them in the general fold. Amita Saraswat, who has been a nursery school teacher for the last three decades, says, “The children who come from poorer homes take a lot of time to adjust – their mannerisms and language are distinct from the rest. As their teacher it becomes my responsibility to ensure that they come up to speed with the rest. We get involved with parents, too. All this takes time but eventually the changes do become evident,“ she explains.

Sushil Sharma, secretary of Indian Cambridge School in Jaipur, agrees, “Teachers have to use different methods of communication with those who come from the reserved quota. With proper guidance though, the children soon come up to the level of the rest.” In order to mitigate the social differences schools like his adopt certain practices – “we don’t allow children to distribute or exchange gifts in class. Moreover, we often counsel parents so that they can keep their children motivated”.

With an idea to make educational services more accessible to schools and parents and, at the same time, keep the RTE figures in check as well as verify the data given by people to claim the special status, the state government started a portal in 2013. The recently retired Rampal Sharma, who was instrumental in the inception and the implementation of the Act in the state, says,

“We have come up with an excellent portal to monitor the RTE. After feedback from users, we have been able to plug most of the loopholes. Schools can easily feed their students’ data into the website. The online application is useful for parents too in case the school refuses to give application forms.”

A proper daily register of a child’s performance is maintained and the parents, who form a part of the School Management Committee (SMC), are kept updated through the website that is bilingual (Hindi and English). Till now, 35,000 private schools have been identified on it, of which officials have authenticated 26,686.

“Any state can replicate it. We have trained office staff at the state, block and district levels to handle their respective domains by verifying the information fed by schools. We have permitted schools to log in thrice in a year to update the profiles of the students. The best part is that the site can be accessed from a mobile phone or a cyber café so that it’s not system-dependent,” he shares.

Pooja Kumari, an LKG student of St Edmund’s School in Jaipur, comes from an impoverished home but has been making straight As in class, much like Anjali Kumari, who studies in Class Four in the same school. The girls mingle freely and are not afraid to ask or answer questions.

Dr Anoop Singh, director of the school, breaks into a smile when he sees them, “I’m happy to say the students we’ve admitted under the RTE provision are extremely hardworking and scoring good grades.” Divya Nair, a nursery teacher, concurs with Singh’s view, “The RTE concept is slowly working. We are thrilled with the progress we’ve made.”

Here is the RTE Anthem, launched by the Ministry of Human Resource Development –