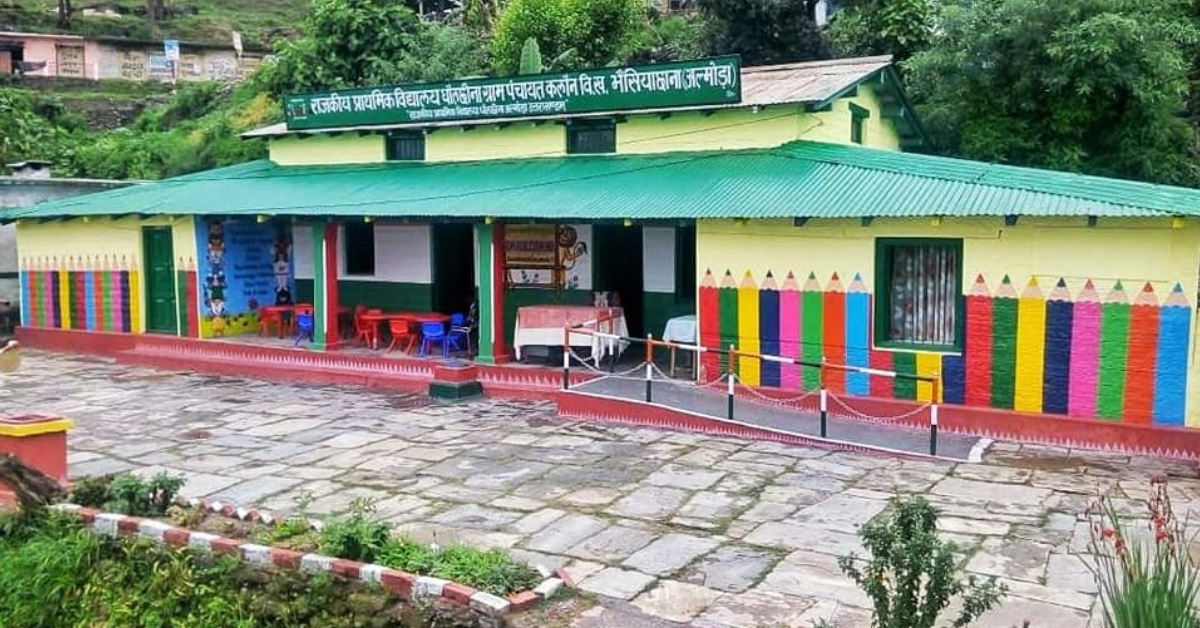 One of the schools renovated under Roopantaran. Source: Facebook/Geetika Joshi Pandey's Timeline

The government officer decided to not only fix the roof but also to renovate the entire school building.

She was out on inspection rounds when Deputy Education Officer (DEO) Geetika Joshi came across the dilapidated primary school in Tarikhet block of Uttarakhand’s Almora district.

The sight of children shivering in the cold, as rainwater leaked from the rooftop of a classroom moved her. So the government officer decided to not only fix the roof but to also to renovate the entire school building.

All with her own salary!

Speaking to the Hindustan Times, Geetika, who has been serving as the DEO of Tarikhet block since March 2015, said, “(The) School was in shabby condition, and when I saw the children, I felt them like my own children. I immediately decided that I will get the roof repaired with my own salary. Later, I renovated the entire building with (my) own money.”

The officer did not stop at that. She decided to extend the project to other decrepit schools in the hilly area and began by interacting with teachers and was pleased to get their overwhelming support.

The teachers too contributed over Rs 2.5 lakh for renovation work that would equip the schools with the required infrastructure. They also decided to provide sweaters for children from underprivileged families.

“A child can’t concentrate on the studies shivering in (the) cold. Tarikhet is a mountainous region, and severe cold is witnessed there,” Geetika told HT.

A major source of help came from IAS officer Himanshu Khurana who took charge as the joint magistrate in Ranikhet in October 2017. He revealed how the initiative was functioning on a small scale and his role in scaling it.

When he visited one of the renovated schools, he asked, “How long you can do this with your own effort?”

“I brought it into the notice of former district magistrate Eva Ashish Srivastava, she pushed it and sanctioned budget from the untied fund,” Khurana told HT.

Under his guidance and with the support of MLAs and businessmen, they kickstarted the ‘Roopantaran’ scheme where a bank account was set up in Ranikhet to seek financial help from well-wishers.

“With the money, we started to provide necessary infrastructure, uniform, teaching material and better quality of education,” said Geetika.

The impact of the efforts of the two officers reflects in the fact that over 43 schools in Ranikhet and 14 schools in other areas of Almora district have been transformed successfully. This is also steadily helping increase the strength of the schools regarding enrolments.

“Several schools were not only renovated (with the money) but also provided smart class equipment,” added Geetika.

Speaking to the publication, Kamlesh Giri Goswami, the headmistress of Government Primary School at Garee, beamed, “Our primary school, after transformation, is not less (than) any private school in term of infrastructure and quality education. It has also instilled confidence in our children.”

It is indeed inspiring to see dedicated government officers help transform the lives of children who need it the most. We hope Roopantaran continues to touch many more lives. Hats off to both Geetika Joshi and IAS Himanshu Khurana. We wish them renewed success at all their public welfare endeavours.