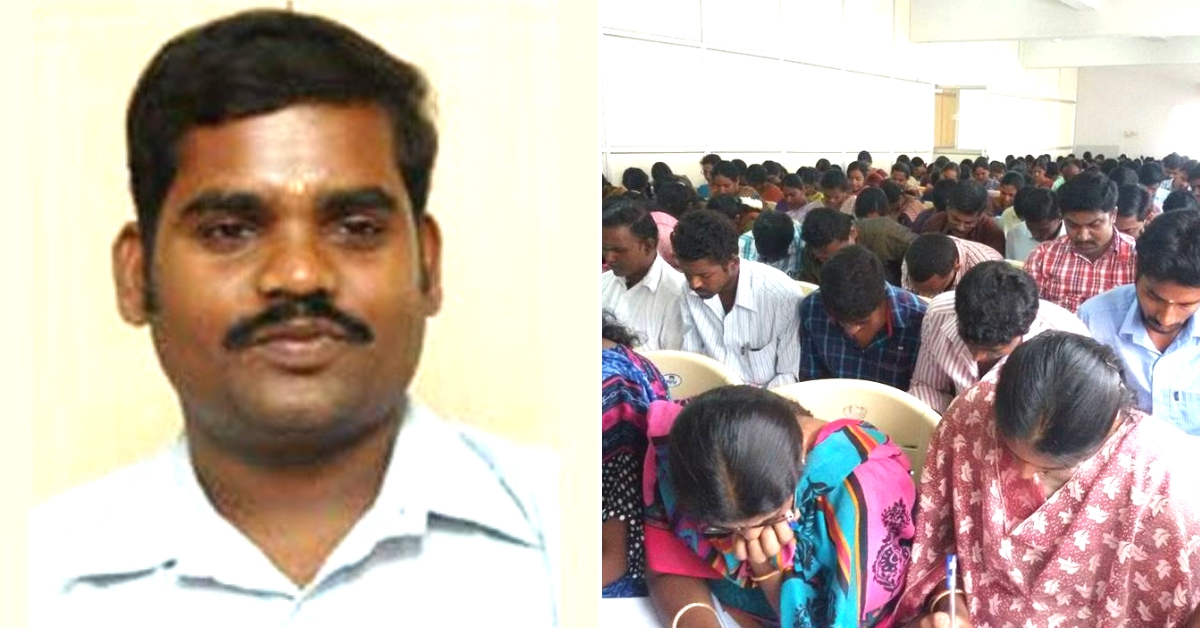 Born into a poor family in a Tamil Nadu village, K Jayaganesh’s incredible story proves that your hardest times often lead to the greatest moments of your life!

For many parents in India, seeing their child get into the Indian Administrative Service is a life-long dream. In a country where private enterprise is yet to reach the heights once envisioned by our policymakers when it took India on the path of economic liberalisation in the early 1990s, the power of the State remains unquestioned. Although our elected representatives are vested with real powers, it’s the IAS officer who wields it on the ground.

Visit any remote village in this country, and this fact becomes painfully obvious. Stemming from that authority is status in society and more importantly, job security. Statistics indicate time and again how the private industry is unable to absorb the millions of young Indians who enter the job market. This is why many young Indians strive so hard to clear the nearly year-long examination process get into the civil services, particularly the IAS. Some join the IAS out of a sense of service or duty, but for many, it is a step up the socio-economic ladder.

For K Jayaganesh, who failed to clear the UPSC exams a whopping six times, getting into the IAS was a dream he couldn’t afford to miss. His story is both inspiring and an indictment of the prospects that await many young Indians entering the job market. Coming from a poverty-stricken family in a Tamil Nadu village, Jayaganesh excelled as an engineering student, but unable to acquire a decent livelihood he worked odd jobs including a stint as a waiter, before making it in his seventh attempt with a rank of 156.

Jayaganesh was born and raised in Vinavamangalam, a village in the Vellore district, where his father worked as a supervisor in a leather factory, while his mother tended to affairs at home. Living among three other siblings, money was tight in the household with his father earning a salary of Rs 4500 per month. Until Class VIII, Jayaganesh studied at a village school before he moved to a nearby town to finish his Class X boards. Following this, he got admission into a polytechnic college with the belief that it would earn him a job and a salary which he would utilise to aid his parents.

Back in his village most of his friends had dropped out after Class X to take up jobs in the local tannery, driving an auto rickshaw or as coolies.

Even though money was tight at home, Jayganesh’s father understood the value of a good education and urged his son to finish college. Jayaganesh complied, passed out with an impressive 91%, and secured admission into the Thanthai Periyar Government Engineering College to study mechanical engineering, becoming the only person from his friend circle to do so.

After graduating in 2000, Jayaganesh soon hopped onto a bus to Bengaluru in search of employment. It didn’t take long for him to find a job at a company dealing with industrial tools, but the pay, Rs 2500, was barely enough. This is when Jayaganesh began to think of other possibilities and eventually, the aspiration to clear the notorious difficult UPSC examination and get into the IAS began to emerge.

“It was in Bengaluru that I started thinking about my village and my friends. I wondered sadly why none of them studied and worked in good companies. Because they had no education, they always remained poor. There was not enough money to buy even proper food. There was no opportunity there; the only place they could work was the tannery in the nearby town. If they didn’t get work at the tannery, they worked as auto drivers or coolies. In short, there was no one in my village to guide the young generation. Can I help my villagers in any way, I thought?” he told this online publication.

During his time in Bangalore, Jayaganesh understood the powers vested in civil servants, and despite all the risks, he soon resigned from his job in Bengaluru and returned home to prepare for the UPSC exams. It’s a decision his father backed all the way—even giving Jayaganesh the Rs 6,500 he earned as a bonus from the leather factory to buy all the study material and acquire notes from coaching centres in Chennai.

In his first two attempts, he failed to clear even the preliminary exams. Speaking to Rediff, Jayaganesh says that in the initial years, he had no idea how to prepare or even what subjects to choose. Choosing mechanical engineering as his main subject was a problem, which only found a resolution once he met Uma Surya in Vellore, who was also preparing for the same.

Surya advised him to drop mechanical engineering and take up sociology as his main subject since it’s considered a lot easier. However, he failed in his third attempt, since proper guidance wasn’t forthcoming. That’s when he came across the All India Civil Service Coaching Centre in RA Puram, Chennai, which is a state-sponsored coaching centre.

He wrote the entrance examination, cleared it, and began training for the UPSC exam with the luxury of free accommodation. In his fourth attempt, he cleared his prelims, but as per coaching centre rules, there would be no free accommodation or food if a student wrote the Mains.

Jayaganesh had no desire of going back home, but living in the city was also an expensive proposition. He once again looked for a mechanical engineering-related job after clearing the Mains, but did not succeed in obtaining one. That’s when he decided to work part-time, while utilising the rest of the time to prepare.

“I got a job as a billing clerk for computer billing in the canteen at Sathyam Cinemas. I also worked as the server during the interval. It never bothered me that I, a mechanical engineer, preparing for the civil services, had to work as a server. I had only one aim—to stay on in Chennai and pass the examination,” he tells Rediff.

Also Read: What Should The Future of The IAS be? Here’s What Officers Have to Say

Unfortunately for Jayaganesh, he slipped at the final hurdle and failed the final interview, which he attributes to his poor command of English. Later, in his fifth attempt, he failed in the prelims stage itself, which was a real setback. However, by then, he had obtained a decent job teaching sociology to UPSC aspirants at a local coaching centre, and financial assistance was forthcoming from his friends in Chennai. At the sixth attempt, he cleared the prelims and mains, but fell short in the interview once again, while clearing another exam to get into the Intelligence Bureau.

At this juncture, he could have easily opted for a job at the IB, but he was determined to fulfil his IAS dreams. His last attempt culminated with an interview in April 2008 in the national capital.

During the interview, he was asked questions about Tamil politics, it’s history and association with cinema, among other facets. Despite performing well, Jayaganesh was filled with an obvious sense of trepidation. This time, however, he would not be denied.

“Finally, when the results came, I couldn’t believe myself. I had secured the 156th rank out of more than 700 selected candidates. It’s a top rank, and I am sure to get into the IAS. I felt like I had a won a war that had been going on for many years. I felt free and relieved,” he tells Rediff.

His success was met with real joy back home, and everyone from his village received him with much love and fanfare. This is not merely a story of true grit, self-belief and perseverance, but the aspirational value the IAS holds for many Indians.