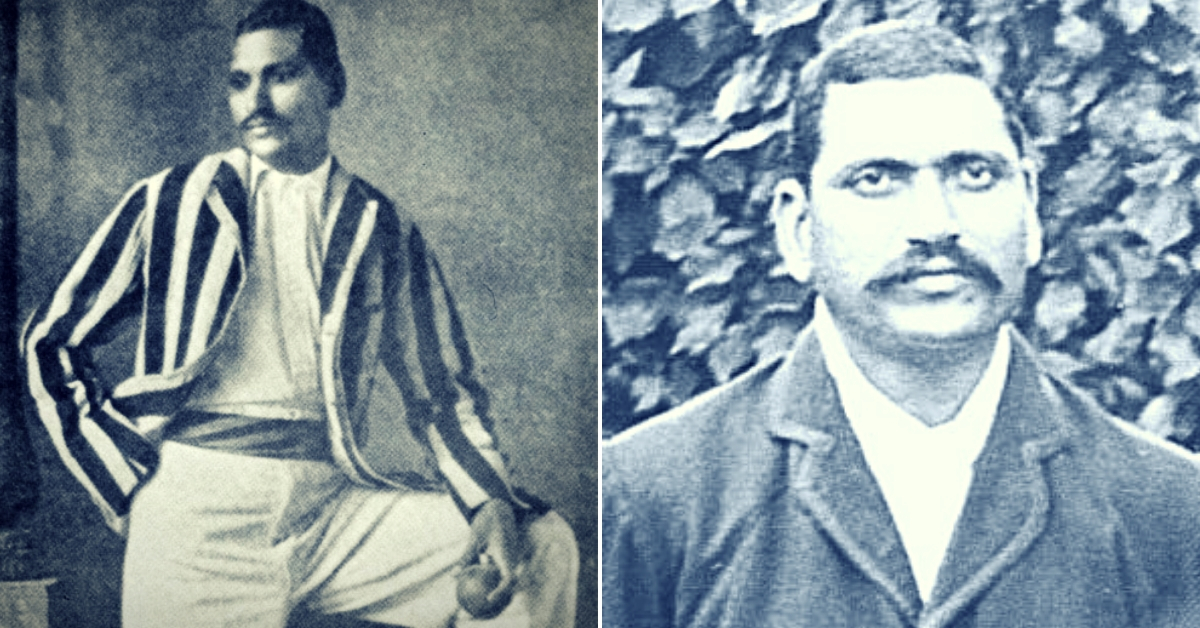 Palwankar Baloo, the left-arm orthodox spinner who could turn the bow both ways with immaculate accuracy, was probably the greatest Indian cricketer of the early 20th century.

More than a sporting icon, however, Baloo was a hero to the Dalit community, showing them that through talent, hard work and persistence, they could make serious inroads into an oppressive cast structure.

Some historians even consider him as the first pan-Indian Dalit icon, a Jackie Robinson-like figure for the community. For Dr BR Ambedkar, another Dalit icon and the man who would go onto script India’s Constitution, Baloo represented the possibilities of a future where caste discrimination does not come in the way of socio-economic progress. He was one of Ambedkar’s biggest heroes, although later on, the two would square off on different political platforms.

Born as the eldest of four brothers in 1875 into a family of leather workers or ‘Chamars’ in Dharwad, Baloo had the good fortune of having a father who had enlisted in the British Indian Army as a sepoy in the 112th Infantry Regiment. Growing up, Baloo and his brother Shivram played cricket with equipment left behind by officers stationed in Pune. For many, joining the army offered temporary relief from the oppressive caste hierarchies, and a shot at a decent livelihood.

Nonetheless, Indian cricket at the time was played along caste and religious lines, which culminated in the Bombay Triangular tournament where teams from the Hindu, Parsi, and British community, would take on each in three-day matches. In 1912, a team from the Muslim community were invited to play in the tournament, and thus the tournament changed to the Bombay Quadrangular.

“Against this backdrop, Baloo, a Chamaar born in Dharwad in 1875, had by his sporting prowess, forced the Brahmins of the Deccan Gymkhana—eager to beat the British Poona Gymkhana—to take him into the team. A few years later, he was recruited by the Poona Gymkhana, and then the Bombay Hindu Gymkhana, who even admitted his brothers—Shivram, Ganpat and Vithal. This was the start of a spectacular family sporting history that reached its climax when Vithal, captain of the Hindu side in 1923, was carried out of the ground on the shoulders of high-caste Hindus after he had led them to victory in the quadrangular tournament,” writes cricket historian Boria Majumdar.

His first job in the game, however, was as a groundsman maintaining the pitch for the Parsis in Pune at a monthly salary of Rs 3. It was in 1892, when the Poona Club hired a 17-year-old Baloo for a monthly salary of Rs 4, not for his talent but to set up the nets, roll and mark the pitch where the British would practice exclusively. However, his talent was unmistakable, and the British soon gave the spin bowler the opportunity to bowl to their batsmen in the nets.

JG Grieg, an English batsman, would reportedly give Baloo eight annas every time he dismissed him in the nets. This is where he first honed his craft of spin bowling. Unfortunately, Baloo’s frustrations grew with the British for denying him the opportunity to bat—a task reserved for the aristocratic British. Nonetheless, word of his talent soon began to spread, and eventually, the Hindus in the community started contemplating whether they should take him into their side or not.

Although he was a spectacularly talented bowler, there was much apprehension among the Hindus whether they should select him or not. They would have to break caste practice to let him play. Better sense eventually prevailed and once selected Baloo helped the inferior (in terms of cricketing prowess) Hindu team to beat the British on more than one occasion.

Word about his talent soon spread to Bombay, and in 1896, Baloo was selected to play for the then newly established Parmanandas Jivandas Hindu Gymkhana, one of the teams competing in the Bombay Triangular. Baloo also moved his family to Bombay because of the plague that had broken out in Pune the same year. Moreover, Bombay offered better cricketing opportunities for him.

He would also enlist in the Army in Bombay before working for the Central Indian Railways, which allowed him to play for their corporate team and the Gymkhana.

Despite his obvious cricketing prowess, caste discrimination was never far away. During match intervals, Baloo would be served tea away from the pavilion premises and in a separate cup made of disposable clay. If he wanted to wash his hand and his face, a separate attendant from the Dalit community would have to serve him with water. Baloo would also eat lunch on a separate plate meant for members of his community and at another table altogether.

However, in the following years, Baloo would earn the respect of his caste Hindu teammates and the Bombay Triangular final between the Hindus and British in 1906 would prove to be a watershed moment for him. Batting first, the Hindus scored 242 and bowled the British out for 191. In the second innings, the Hindus were bowled out for 160, leaving the British with a target of 212 runs to chase.

Led by Baloo’s five-wicket haul in the second innings, the British were bowled out for a paltry 102, handing the Hindus a famous victory against their British colonisers. With the freedom struggle in full swing, this was a landmark victory celebrated across the country.

It was only a few years later when according to the Indian Social Reformer the Bombay Hindu Gymkhana began inter-dining with Baloo, and his induction allowed his brother Shivram to seamlessly make it into the team. “The history of admission of these Chamaar brother in the Hindu Gymkhana is a credit to all and has done far more to liberalize the minds of thousands of young Hindus that all other attempts in such sphere,” the publication said.

In 1911, the growing clamour for an Indian team to tour England had culminated in a 12-match series against a host of county and university sides. The series ended in humiliation for the Indian team, which lost 10 out of the 12 matches, but Baloo’s talents shone through, picking up an impressive 87 wickets and scoring a respectable 376 runs as a lower order batsman.

Baloo returned to India a hero not just for the Indians immersed in the freedom struggle, but also for the depressed classes. They were delighted not merely by his success against the British but also how he had outshone his Brahmin teammates. At one particular function, a young college lecturer by the name of BR Ambedkar made his first public appearance and presented the welcome address for his hero—Palwanker Baloo.

In his book ‘Dr Ambedkar: Life and Mission,’ historian Dhananjay Key wrote: “As a little-known lecturer in Bombay’s Sydenham College, Ambedkar organised functions to felicitate Baloo and worked for his elevation in the Bombay Municipal Corporation. Ambedkar considered Baloo a hero of the Dalit, naming him as an inspiration to himself and others of their caste, but over the following years a rift was to grove between the men over the methods of dismantling the caste system.”

Despite his prowess on the field, Baloo was never considered for the captaincy of the Hindu teams now playing in the Bombay Quadrangular. Every year from 1910 to 1920, there were campaigns to make him captain, but these efforts were all in vain. In fact, in 1913, the then captain MD Pai himself admitted, “The honour of captainship should have been given to my friend Mr Baloo.”

Matters came to a head in 1920 when the selectors dropped Baloo from the team, and his brother Vithal, a fantastic batsman and the hero of Vijay Merchant, another cricketing legend, was denied the role of captaincy in favour of a high caste player, DB Deodhar. Angered by these events, all three brothers—Baloo, Vithal and Shivram—withdrew from the team in protest.

“Social or educational status has no place in sport…that such matters as caste should be the determining factor in cricket is more than we can quietly bow down to,” the brothers said in a letter. Eventually, the impasse was broken when selectors made Baloo vice-captain.

According to one account: “Rank and file members of the club were outraged (at the selectors for dropping Baloo) and at a meeting after the match expressed their displeasure so vehemently that Deodhar was removed and Baloo invited to play again for the Hindu Gymkhana, as vice-captain. During the next match against the Parsis, Deodhar’s replacement, MD Pai (also a Brahmin), deliberately left the field for an extended period, allowing Baloo to direct the team in his absence.”.

Although this wasn’t the end of the boycott by the brothers, Vithal skippered the Hindu team three years later to a famous victory against the British, as stated in the above quote from Boria Majumdar. Appointing a Dalit as captain for the Hindu team open the floodgates for the depressed classes in spurring hope that they could also enjoy such progress.

Also Read: The Untold but Inspiring Stories of These 8 Indian Sports Heroes Will Make Spectacular Biopics!

This was around the same time that Mahatma Gandhi had begun his movement against the nasty practice of untouchability. However, this movement faced its ultimate test in 1932, when Baloo, an avowed Gandhian, squared off against Ambedkar, a harsh critic of Mahatma Gandhi, over the issue of separate electorates for the depressed classes issued by the British government.

While Baloo took Gandhi’s line on greater Dalit integration into the Hindu community, Ambedkar felt that this way of life had nothing to offer but discrimination. Gandhi felt that separate electorates for the Dalits would break Hindu society, and opposed it, while Ambedkar supported the move because he thought that it would offer his community better representation in domestic politics.

Ambedkar remained steadfast in his position, while Gandhi went on a fast-unto-death in Yerawada Jail in Pune. When Gandhi’s health began to worsen, Baloo and Tamil leader MC Rajah pleaded with Ambedkar to change his mind, and thankfully both sides arrived at a compromise called the Poona Pact, which agreed on reserved electorates.

In 1937, both Ambedkar and Baloo would face off in the elections for the Bombay Presidency. By that juncture, Baloo had opposed Ambedkar’s call for the conversion of Dalits out of Hinduism.

According to historian Ramachandra Guha, in his seminal book on Indian cricket history, ‘A Corner of a Foreign Field,’ it was Sardar Patel who decided to pit Baloo against Ambedkar for the Bombay Presidency elections. Despite squaring off on opposing sides, Baloo wasn’t very keen on taking on Ambedkar and reportedly told a crowd in January 1937 that he agreed to fight elections on a Congress ticket without knowing which seat he would contest from.

Baloo would lose that election by a little over 2000 votes.

The cricketer-turned-politician lived well into Independence and passed away in July 1955 in Bombay. His funeral at the Santa Cruz crematorium was attended by all representatives of the depressed classes in Parliament and Provincial Assembly.

This is a legend we must all remember. He played a part in paving the way for a Better India.