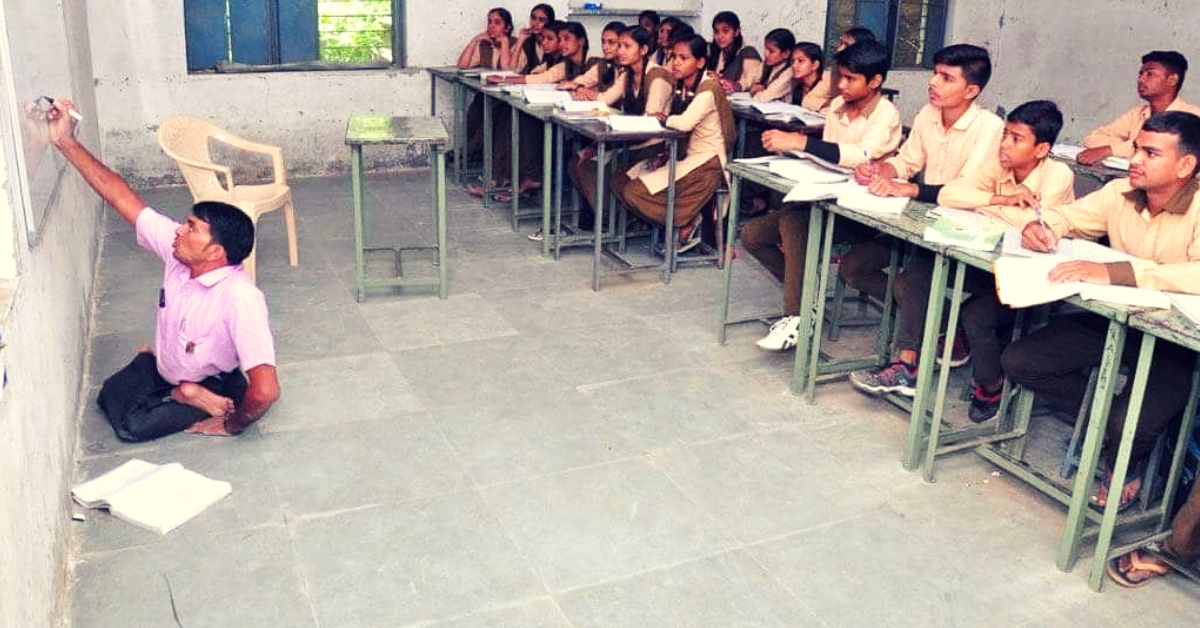 This story is also about one such teacher whose passion to teach government school kids is moving thousands on the internet.

Whether it is 29-year-old teacher Rajinikanth Mendhe who travels 50 km every day to teach his only student, eight-year-old Yuvraj Sangale in the remote village of Chandar in Maharashtra or Professor Sandeep Desai who once begged on trains to collect funds to set up English-medium schools in rural India– teachers and their unmatched dedication to the cause of education continues to amaze us.

This story is also about one such teacher whose passion to teach government school kids is moving thousands on the internet.

A tweet posted by Sanjib Ghosh shows a Rajasthan-based teacher, Sanjay Sen, teaching his students. Nothing extraordinary, isn’t it? But wait until you see the picture.

Meet Sanjay Sen, a physically challenged man, teaching at a village school in Rajasthan under the Shiksha Sambal Project since 2009…salute for his dedication.?#Respect ? pic.twitter.com/GuBU8wdjqJ

It shows the physically-challenged teacher, with his lifeless limbs folded together on the ground as he reaches out to the whiteboard with a marker, addressing his class, as they look on rapt.

According to the tweet, Sanjay Sen has been working in the government school in the state under the Shiksha Sambal Project since 2009.

Students in these rural schools either drop out or fail class X as they struggle with subjects like English, Science, and Mathematics (SEM). One of the reasons for this is the acute shortages of teachers for the SEM subjects. The Shiksha Sambal Project aims to address these challenges.

The CSR project by Hindustan Zinc Limited (HZL), in collaboration with the Government of Rajasthan, is reaching out to 7,000 students from classes 9th to 12th across 55 government schools located in Ajmer, Bhilwara, Chittorgarh, Rajsamand and Udaipur districts of the state.

Some of the heartwarming reactions to the viral post that garnered 2,035 retweets and 4,312 likes
include:

While another tweeted, “I will not only salute his dedication, but I will also salute his family members, his friends and everybody who were with him when he needed them the most, who gave him hope, mental strength and confidence to fight all the odds of life and live life with full respect.”

While another lauded the teacher’s dedication, he shared similar examples of other teachers who are defying all odds to crusade for access to good quality education.

Read More: Village with Few Hopes Now Has over 30 IAS/IPS Officers, Thanks to One Principal!

“Great. God be with the man. I am also sharing one such example, where the teacher can’t walk, on top, has suffered oral cancer but relentlessly working to improve education in a small town Kanwan in MP. A true spirit of teaching and bringing about a change for a better tomorrow!”

We salute teachers like Sanjay Sen who continue to prove that teaching is not just a profession but a calling!