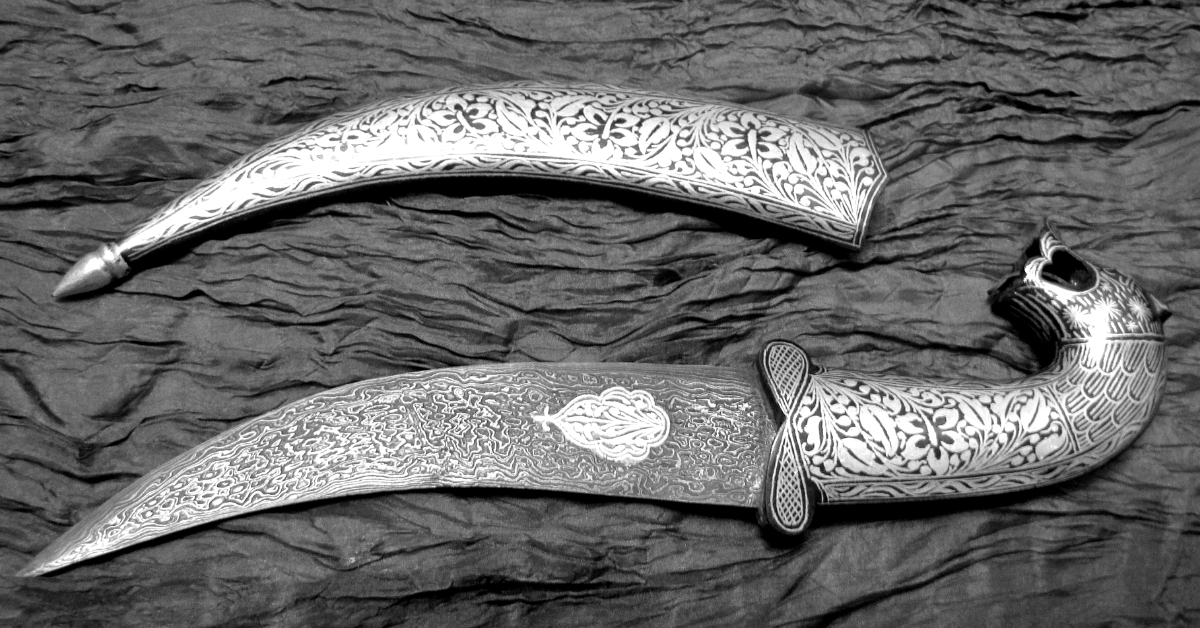 A dagger made from woozy steel. Source: Flickr-jasleen_kaur

Way back in the 6th century BC, this finest of alloys being made was in the Chera Kingdom of Tamil Nadu, from where it spread far and wide.

Wootz steel or Damascus steel is one of the wonders of the ancient world. With its characteristic meandering pattern, the steel alloy known as Wootz steel (derived from the Tamil word ‘Urukh’) still a towering example of metallurgy to this day.

Incidentally, though the swords made from the steel, Damascus swords, are famous around the world, few seem to realise that the swords were made from ingots forged in India.

Way back in the 6th century BC, this finest of alloys being made was in the Chera Kingdom of Tamil Nadu, from where it spread far and wide.

Developed by the Tamils themselves, the alloy is made by hammering porous iron while it is hot.

Then, the metal is sealed in a clay container with wood chips. When heated, the wood turns to carbon, which bonds with the iron to make steel. At least that is how we speculate that they did it. The real technique has been lost to history. And it may be far more complicated than that.

But now, we may be one step closer to proving this theory, thanks to two inter-connected papers published by Prof Sharada Srinivasan from the National Institute of Advanced Studies (NIAS), Bengaluru.

Prof Srinivasan has been studying wootz steel for quite a while. She has published several research papers on the subject, highlighting the importance of metallurgy.

Some of the earliest metallurgical finds to date are those found in Adichanallur, Tamil Nadu – now stored in the Government Museum, Chennai. For her research, Prof Srinivasan studied these artefacts quite closely.

Prof Srinivasan studied these metallic artefacts under an electron microscope, only to find an intricate, perforated design that could only be achieved through the use of sophisticated metallurgical processes. This means those who made the alloy not only knew exactly what they were doing but had perfected the method through trial and error.

Previously, alloys like these were thought to be made either by fusing cast iron and wrought iron or by adding carbon to wrought iron through various means. But it has been difficult to find clinching evidence to prove with certainty which technique made the ultrahigh-carbon steel of the Tamils all those centuries ago.

Prof Srinivasan may, at last, have some answers for this. In her new paper, she states that her research has indicated that this type of high carbonaceous steel could only be achieved by packing the iron blooms with carbonaceous materials like wood, and firing the furnace at high temperatures, not less than 1,400°C for a long time.

This method, dubbed by the paper as the ‘Tamil Nadu Process’, could only be achieved by skilled personnel with a deep understanding of the metallurgy of those times.

This is a method that is used to create variation in modern steel as well.

Interestingly, she arrived at this conclusion through a tangential route. Her earlier published paper focused on bronze. An alloy of copper and tin, the bronze from the forges in Adichanallur was also rated very highly.

Prof Srinivasan discovered that Adichanallur’s beta bronze had a very high percentage of tin, some 23%. This composition increases the malleability of the alloy, which can then be worked on to a considerable degree at high temperatures, followed by rapidly cooling, improving the tensile strength and tonality of the bronze.

She figured out that the only way they could create alloys with such high proportions of tin was by heavy hot-forging. That is, the temperature of the crucible in which the alloy was made had to be very high and consistent.

Investigations on the crucible fragments of Mel Siruvalur have shown that these crucibles are made of ‘hypereutectoid’ or ultra-high carbon steel.

Her further research into these crucibles led her to her the current paper.

Speaking to Research Matters, Prof Srinivasan commented on its importance, “There has to be more awareness of the need to also preserve such aspects of scientific and technological heritage for posterity. There is also a need to foster more interest in the disciplinary study of scientific archaeology.”

Hey, you may also like: From Ancient Times to the Modern: 7 Indian Inventions You Use In Daily Life!