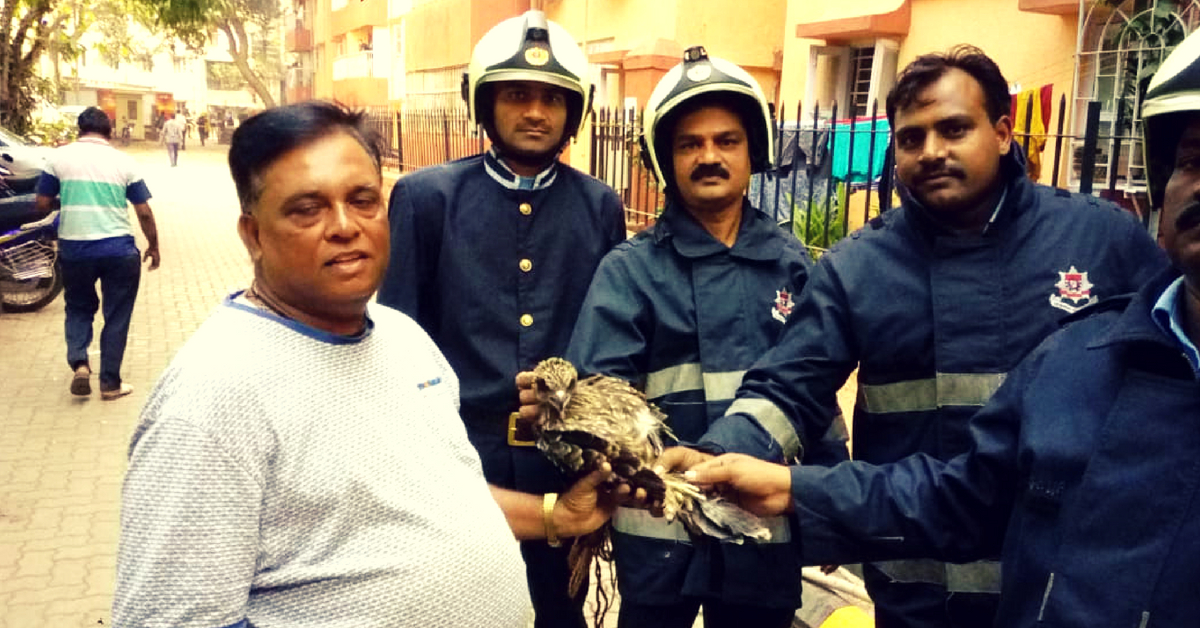 “Never has a single passenger complained of being inconvenienced by my rescue work. Instead, they extend their help,” he says.

The next time you hail an Uber in South Mumbai, Shailesh Mehta may be your driver. If he does pick you up, then you can consider yourself lucky to be driven to your destination by this 51-year-old.

You’ll know once you see the vehicle approach.

Neither Shailesh nor the WagonR that he arrives is ordinary. With ‘Animal Rescue’ and ‘Jivdaya’ printed on the white surface, it bears an uncanny resemblance to an ambulance, sans a siren. Once you enter it, you see it equipped with a first-aid kit, nets, bags, and a host of rescue equipment.

This cabbie doubles as an animal rescuer in Mumbai. 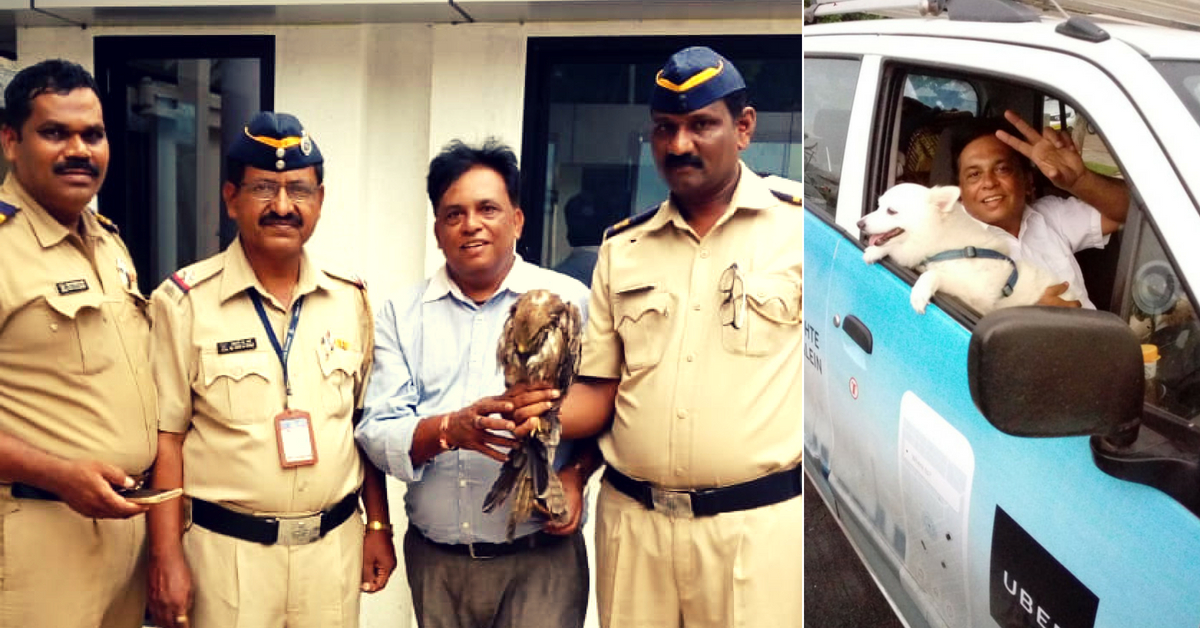 While he bought a car (on lease) and began driving it with the cab-aggregator nearly two years ago, the Mumbai man has been involved in rescue work for distressed animals for the last 15 years.

In an exclusive interview with The Better India, Shailesh drives down memory lane and shares his journey with us.

Before becoming an Uber driver, Shailesh, who hails from a middle-class Jain family near CP Tank, used to work for a travel agency owned by a Parsi elderly in Parel.

The man was a humanitarian involved in the Bai Sakerbai Dinshaw Petit Hospital for Animals or the Bombay Society for the Prevention of Cruelty to Animals – as it is popularly known.

Shailesh would often tag along on these visits, becoming a regular. Soon, a known face to the hospital staff, he started actively looking out for injured animals. His boss would often jokingly tell him how he was being paid for social work.

Even when he started driving for the cab-aggregator, the work continued. He started gaining recognition, even earning an award from Uber for going beyond his duty to help distressed animals.

“Never has a single passenger complained of being inconvenienced by my rescue work. Instead, they extend their help,” he says.

One such incident was when a businessman needed to be dropped at Oberoi Trident Hotel. Around Vakola, they saw bikers surround a profusely bleeding dog. When Mehta asked for permission to stop and intervene, the gentleman got out with him too. He not only persuaded that he accompany Mehta to the veterinary hospital in Parel but waited until the canine was treated and bore all the expenses for the medical treatment.

Shailesh has a great number of animal-lovers and contacts for his rescues. They number not less than 500-600 volunteers. “Just a call away,” he beams.

The love for these voiceless creatures is not new though. Even as a kid, he recalls how his heart ached when he saw stray dogs and other animals being run over by speeding vehicles. Their painful death and cries for help would keep him awake at night, forcing him to relive the horror.

Living in a Jain Colony at Mumbai’s CP Tank though, Shailesh eagerly awaited Paryushana. Little did he know that the eight-day festival would gain a new meaning. 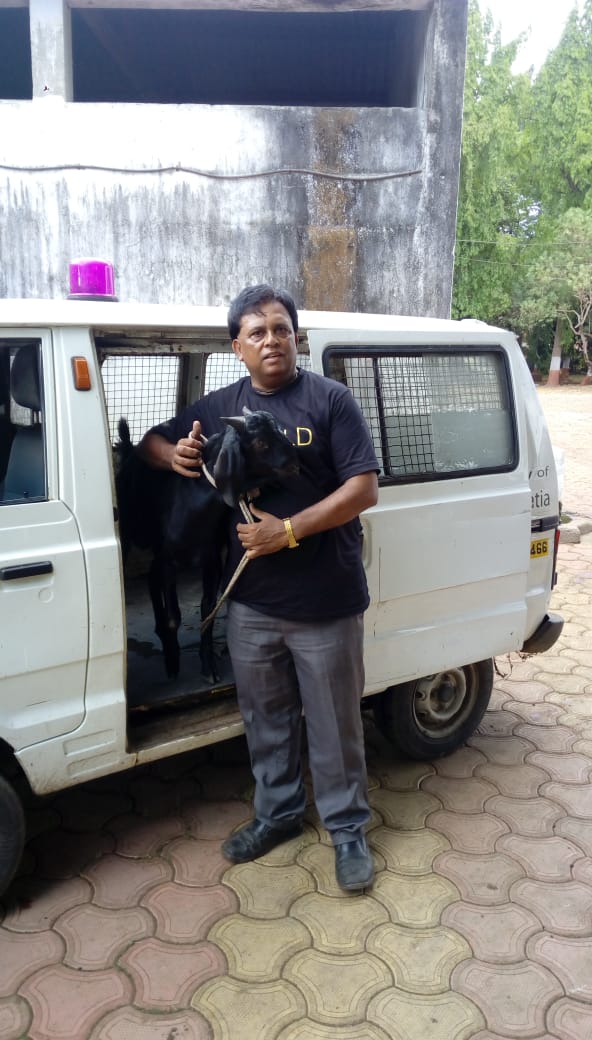 When he started volunteering for the South Mumbai-based organisation, Welfare of Stray Dogs during Paryushana, he stood alongside volunteers at the temple steps. To collect funds. These funds were then used to travel to the city’s Crawford Market– infamous for illegal trade of birds and animals.

“I still remember the sense of freedom that followed when we bought over 100 pigeons and freed them. It was a turning point in my life. I knew that serving these voiceless animals and birds was my purpose. It was only a matter of time until it became my life’s sole mission,” says Shailesh.

It’s been 15 years ever since. And there is no looking back for this messiah who has taken the wheel for animal welfare 24/7.

Whether it is his two-wheeler ambulance or his car, Shailesh is up for rescues at all times of the day with his contact number spread far and wide across the city.

So much so that he is listed as an ‘animal welfare officer’ in the directories of top offices like the High Court, Mumbai Police Control room, BMC and fire brigade control rooms.

If you were to walk into any police station or meet civic officials in South Mumbai, you’d know how popular ‘Shaileshbhai’ is. The man who starts his day at 8 in the morning, often ends it post-midnight, if rescue calls come in. His number is always accessible to anyone who gets in touch on behalf of a distressed animal and conducts 10+ rescues a day.

Even as we speak, he is on his way to rescue an abandoned dog, and a few horses that were confiscated after a raid, but have no space to go.

His informal group Jidaya Seva continues to gather funds to free caged birds at Crawford Market. While rescued animals are taken to the SPCA in Parel, injured birds are taken to his friend and popular Mumbai Birdman Pradeep D’Souza’s rooftop in Queen’s Mansion in Fort where they are nursed back to health. Once fit to fly, they are released.

Shailesh adds how the WSD training in sterilisation, first-aid and emergency aid comes handy when he drives through the city lanes dropping passengers and rescuing injured animals.

But his initial journey wasn’t easy. It was difficult to hail ambulances and quite expensive for individual rescuers. “WSD was kind enough to extend its support by making their ambulance as well as medicines available to me at odd hours.”

Now, most of his rescues and welfare work are funded from his pocket.

Apart from helping distressed animals, he also feeds pedigree food to about 100 strays dogs and cats every day. “Strays live and eat out of garbage dumps. Not many give them nutritious food that house pets get. So I do my bit to feed them,” he says.

He adds how, apart from the government-run BSPCA, the city lacks hospitals for animals apart from and emphasises the need for more animal shelters and hospitals to be set up.

At the end of every ride, he hands over his card and asks the rider to contact him if they spot an injured animal.

With his name in bold and his title of ‘Animal Welfare Officer’, it has illustrations of a few of the animal and bird species he has rescued. Don’t be disappointed if you don’t find the animal you love on it. It’s just the lack of space on the card, he sighs. From blind parrots, injured vultures, to overworked horses, Shailesh is a saviour to every voiceless being around him.

“We love our children unconditionally and give them the best we can offer. Then why not animals? They are voiceless. But we were given a voice to understand their needs and protect their rights. The least we can do is listen close and reach a hand out to help,” he signs off.

If you want to help Shailesh Mehta in his humanitarian work, get in touch with him on 9820135517.