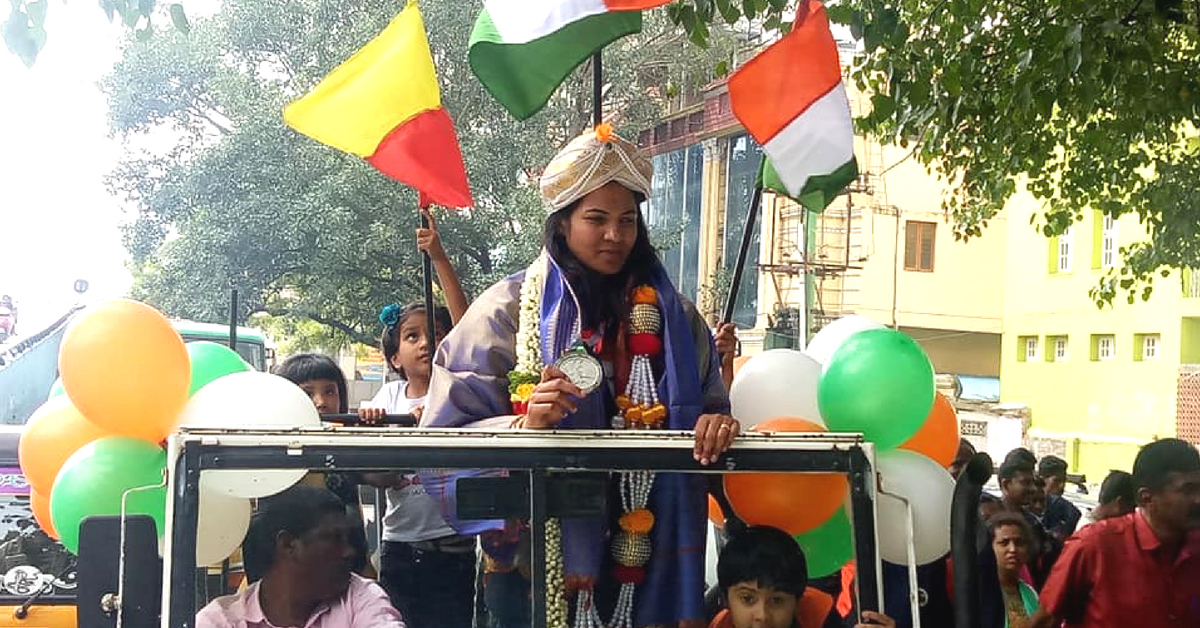 Puttamma recalls how a young Usha, then in high school wanted to go to the tryouts at Vidyapeetha for the sub-junior selections. She asked her mother for Rs 10 to take the bus from Yeshwantpur.

Usha Rani, a 30-year-old police constable from Karnataka, was one among the iconic team of Indian women who clinched a silver medal in women’s Kabaddi at the Asian Games in Jakarta on Friday.

Usha’s story of an intense struggle to beat poverty and emerge victorious has become a major source of inspiration for many.

The second among three daughters of Puttamma and Narasimhiah, Usha spent the majority of her childhood stringing flowers for a meagre wage of Rs 50 per day.

Puttamma has five children—Shobha Rani, Usha Rani, Divyashree, Prakash and Naveen. Speaking to The New Indian Express, Puttamma speaks of how her daughters would spend over six hours a day, stringing flowers in their tiny home in Yeshwantpur, and yet, kabaddi was all they, and their brothers, talked about.

While all of her children are play kabaddi, Usha was the first to become a professional player.

“I never dreamt of making my daughters, kabaddi players. All I know is stringing flowers. We would get 5 kg of jasmine every day from big vendors. After they came home from school, we would string the flowers, and get Rs 10 per kg. However, be while stringing the flowers or while having dinner or lunch, kabaddi was the only topic our daughters would discuss,’’ she said.

Puttamma recalls how a young Usha, then in high school wanted to go to the tryouts at Vidyapeetha for the sub-junior selections. She asked her mother for Rs 10 to take the bus from Yeshwantpur.

“I did not have even this meagre amount. So I borrowed the money gave it to her. She got selected and there was no looking back for her since then. She has been playing kabaddi at the state, national and international levels. The Asian Games was her first match outside India, and she won silver,” Puttamma said with a smile.

She fondly remembers how while leaving for the event, Usha told her that she would bring a medal home. “I am so proud of her; she is the only one to be selected from South India in the kabaddi team,” she added.

Usha’s passion for Kabaddi may also be credited to her parents, who always encouraged her and her siblings to pursue the sport wholeheartedly.

Usha and her siblings were trained at the Shree Matha Kabaddi Sports Club for Women.

Speaking of Usha’s diet, Puttamma mentions that it mainly consisted of Ragi mudde and chapathi, which helped the athlete survive the strenuous physical activity on the grounds during matches from 6 in the morning to 11:30 in the night.

Needless to say, her efforts paid off. After arriving in Delhi on Saturday, Usha Rani spoke to the press about India is now moving forward to giving hockey and other sports the recognition it deserves.

“There was a time when only cricket was seen as a national game. Now things have changed. I am glad there is equal attention for all the games including kabaddi. Hard work will take us to great heights. I am thankful to my department and proud to be part of Karnataka police,” the constable with the Doddaballapur police station signed off.

Hats off to Usha’s grit and determination. We hope as part of the women’s kabaddi team, she continues to wins laurels for the nation and make her family proud. Fly high Usha!