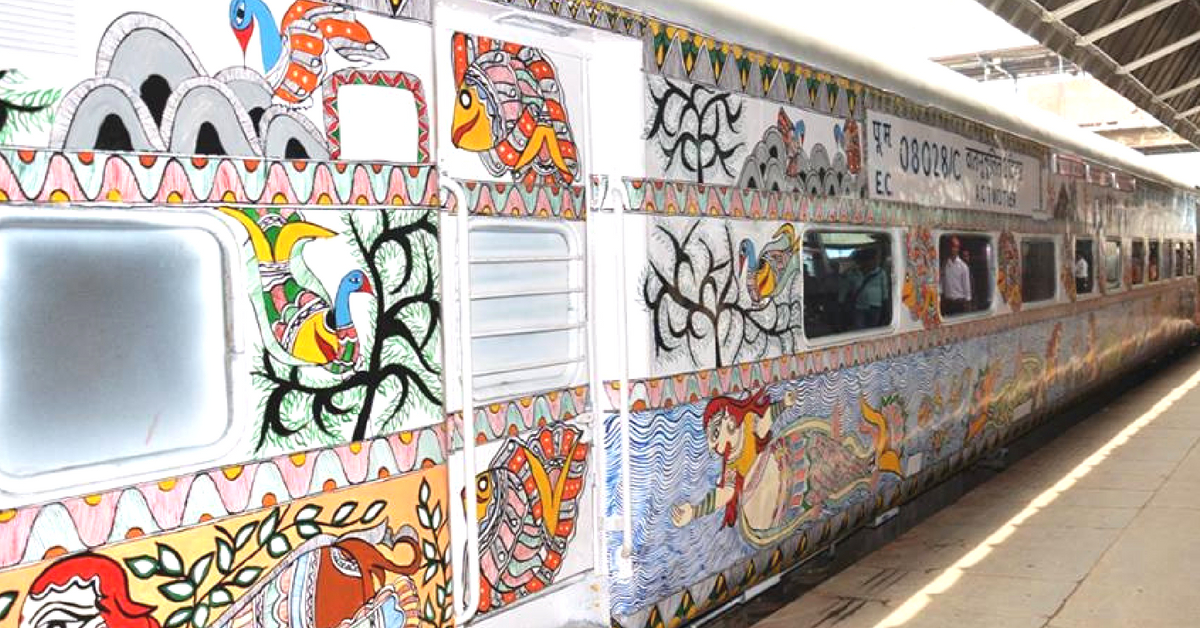 This Bihar-Delhi train is a stunning artwork on wheels.Image credit: Northern Railway

The train arrived in New Delhi, and onlookers were surprised to see its facade covered with beautiful art.

It was a usual Friday evening at the New Delhi Railway Station. Passengers bustled about waiting for their trains to arrive. Nothing unusual—around 400 trains start, end or pass through the station daily, according to this data.

However, there was a buzz as soon as one train started rolling in, and people could just not stop staring at it. Up-front, it looked unlike anything else they had ever seen.

The train in question was the Bihar Sampark Kranti Express, reports the Hindustan Times.
Along with the Vaishali Express for New Delhi, it is the most important train in North Bihar.

But what was so special about the train?

Well, the entire exterior of the train was covered with traditional Mithila artwork, also known as Madhubani art, thus making it a visual treat.

Practised in the Mithila region of Bihar in India, Madhubani art is characterised by eye-catching geometric patterns.

The painting is done with fingers, twigs, matchsticks, and brushes using natural dyes and pigments.

According to Samastipur Divisional Rail Manager (DRM) RK Jain in the Hindustan Times, the train in question is the first to get such a comprehensive makeover showcasing traditional artwork. This is part of a bigger experiment to promote the local art and culture on a larger canvas and showcase nuances of artwork to the public.

“It took four days for a batch of 30 local women artists to paint a coach. The painting work by them in the first phase had commenced here on July 20,” said railway official Chandrashekhar Prasad Singh, to HT.

The train consists of 9 coaches, which comprise a pantry car, 4 AC coaches, 3 Sleeper Class Coaches, and one General Compartment, as of now.

Incidentally, the Madhubani station, under the Samastipur division, was declared the 2nd best at an All India Railway Station Beautification contest held recently. The walls of Patna Junction have also been decorated with Madhubani paintings to popularise the art and culture of Mithilanchal, according to East Coast Railway Chief Public Relations Officer (CPRO) Rajesh Kumar, in the Times of India.

The Railways is anticipating the response of the public. If it is positive, it will consider applying this move on other trains as well.

You may also like:- Get Your Marriage on Track: Take Your Wedding Vows Aboard a Luxury Indian Train

Well, if the pictures of the Bihar Sampark Kranti Express are anything to go by, this ‘Art on Wheels’ project by the Railways is sure to be a visual treat.