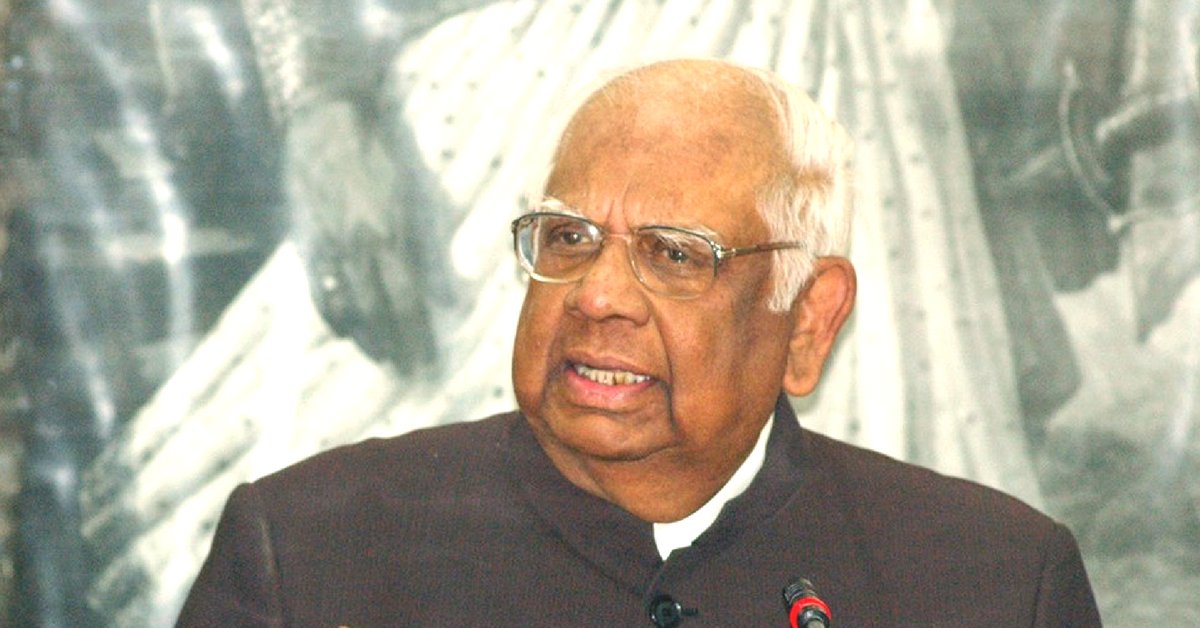 Did you know he once scolded MPs that their unruly behaviour in the Parliament was a sheer waste of public money?

Somnath Chatterjee, one of India’s most distinguished parliamentarians, passed away earlier today at the age of 89, following a heart attack. The 10-time MP was a stalwart of Indian politics, who brought sanctity to Parliamentary proceedings at the cost of his expulsion from the Communist Party of India (Marxist), which he had served faithfully from 1971 to 2008.

Born in Tezpur, Assam,  to NC Chatterjee who was once a president of the right-wing Hindu Mahasabha organisation—the precursor to the RSS and BJP—and Binapani Debi, Chatterjee studied in Kolkata and earned his law degree from the United Kingdom.

He was elected to the Lok Sabha for the first time in 1971 as an Independent candidate with support from the CPI (M); a party he eventually joined the same year.

He was re-elected to the House 10 times and only lost one election to Mamata Banerjee in 1984, who was then just a 29-year-old. He opposed the Indira Gandhi regime during Emergency, which he described in an interview with Rediff, as the “most traumatic period” as a Parliamentarian, during which his passport was impounded, and he was forced to go into hiding.

One of the first recipients of the Outstanding Parliamentarian Award in 1996, the then president Shankar Dayal Sharma said Chatterjee had “represented the people with full commitment, dedication and sincerity and on several occasions guided the formation of public opinion on key national issues.”

“Unfailingly, he has articulated a national vision unencumbered by regional, sectional or group interests and has exemplified the approach advocated by an outstanding parliamentarian,” Sharma reportedly said of Chatterjee.

However, Chatterjee really made a long-standing mark in Parliament during his term as Speaker from 2004 to 2009 under the first United Progressive Alliance government.

A stickler for rules, Chatterjee was often referred to as ‘Headmaster’ by his fellow MPs. It was his own party who suffered the most from his penchant for sticking to the rules.

Unlike many in Indian politics, Chatterjee had the gumption to clearly delineate the responsibilities of the legislature, judiciary and executive—a critical facet of any functioning parliamentary democracy. He went as far as to slam the Supreme Court in 2005 for “encroaching on the right of the legislature by issuing orders (on Shibu Soren’s swearing-in as chief minister) on the proceedings of the Jharkhand Assembly during a vote of confidence.”

In a subsequent interview with Rediff, he said, “You (the court) cannot legislate. You cannot supplant representatives of the people.”

During his time as Speaker, he stopped the practice of MPs paying for their tea and toiletries using the money of taxpayers, besides starting Lok Sabha TV, and live telecasting the proceedings of the Zero Hour. However, it was his conduct during the critical trust vote on the Indo-US nuclear deal which will stand the test of time. It was the incident which got him expelled from the CPI (M).

When the CPI (M), then an alliance partner of the Congress, decided to withdraw support for the UPA because of the Indo-US nuclear deal during a no-confidence motion, Chatterjee refused to resign from his post of Speaker and vote against the government.

“The Speaker of Lok Sabha, like the speakers of other elected assemblies, while acting as such does not and cannot represent any political party,” he said.

However, he was soon expelled from the party, a time which he called “the worst period of my life.”

In February 2009, he reprimanded lawmakers from various parties for disrupting parliamentary proceedings, criticising them for wasting taxpayer money. He told the protesting MPs that if they carried on this manner, they did not “even deserve one paisa of public money.”

“I hope all of you who don’t want this House to function should be defeated in the election. You have to be taught a lesson; people will give a fit verdict,” he said.

Speaking to The Indian Express, K Srinivasan, Director, Lok Sabha, said: “He was an institution, a no-nonsense personality and humane to the core. He has done so much for Parliament and its official staff. We will never forget him for his stature and down-to-earth nature.”

Here are some of the tributes India’s leading politicians have paid to Somnath Chatterjee:

Former MP and Speaker Shri Somnath Chatterjee was a stalwart of Indian politics. He made our Parliamentary democracy richer and was a strong voice for the well-being of the poor and vulnerable. Anguished by his demise. My thoughts are with his family and supporters.

I mourn the passing away of Shri Somnath Chatterjee, 10 term MP and former Speaker of the Lok Sabha. He was an institution. Greatly respected and admired by all parliamentarians, across party lines. My condolences to his family at this time of grief. #SomnathChatterjee

Rest in peace now Somnath da. It was an honour to have known you & to have learnt from you. The Lok Sabha was much the poorer by your absence in recent years. India has lost a parliamentary giant today. #SomnathChatterjee