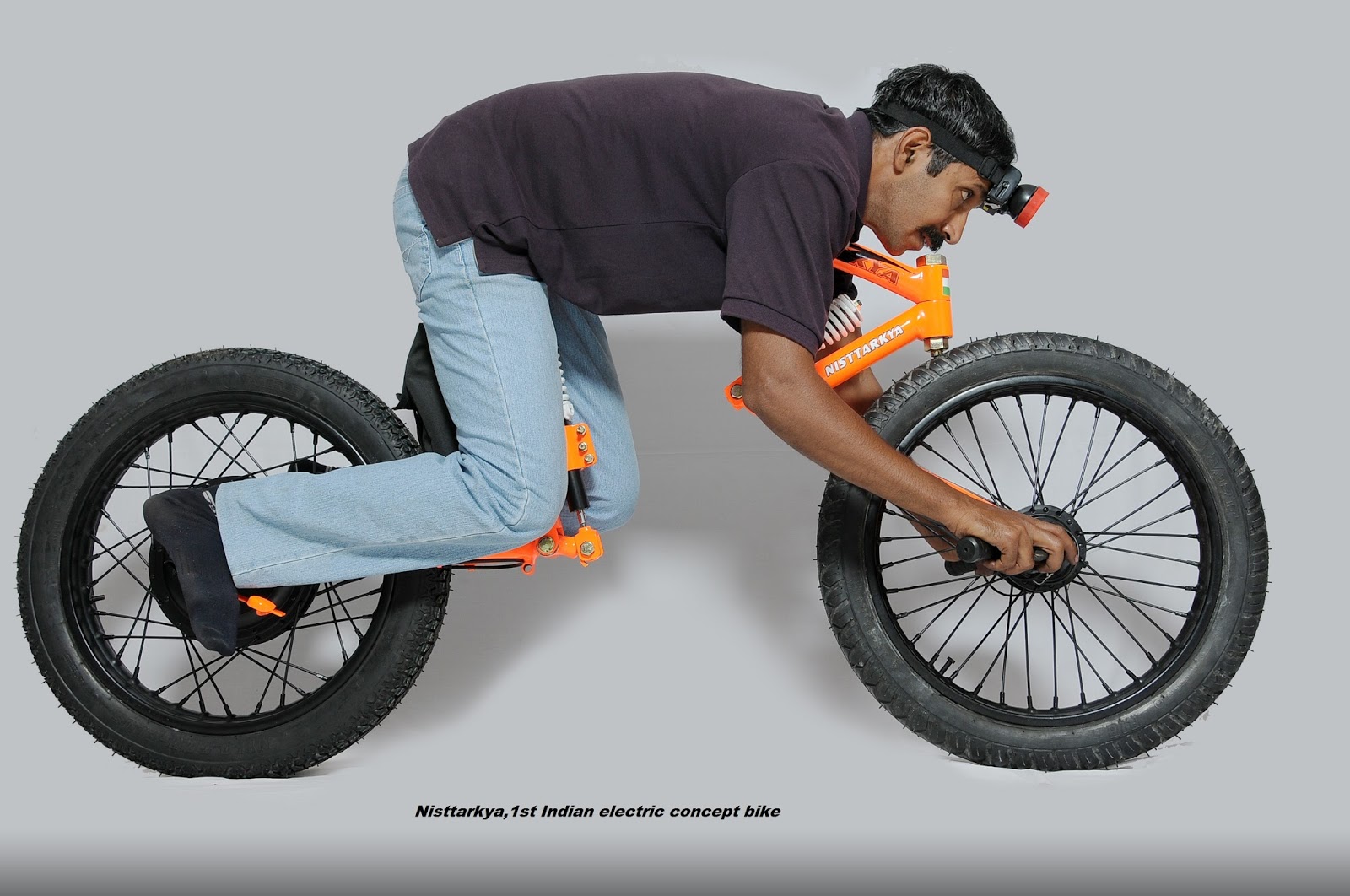 Santhosh’s love for machines was evident from childhood. Financial restrictions and responsibilities did not allow him to pursue a full-fledged career in the engineering field, but he did not give up and created India’s first electric concept bike all on his own. Not only this, he has several mentions in the Limca Book of records for his various inventions. Meet the man who has the guts to follow his dreams.

“Machines are the love of my life. Ever since I was a kid, I would find myself changing various parts of motorcycles. I guess I got this enthusiasm and passion from my father. He also loved bikes and inventions. Sadly, he is no more with me today but his inspiration keeps me going,” says Santhosh.

He does a regular job in a pharmaceutical company, supports his family and still finds time to create world records. He does not hold an engineering degree but has his name registered in three world records for his amazing bike designs. He recently designed an unusual bike that has caught the world’s attention.

He invented India’s first electric concept bike “Nisttarkya”, that features a unique riding position. “The bike’s unusual position is something which catches everyone’s attention. This is how concept bikes work, to demonstrate the creativity and imagination of the engineer,” says Santhosh.

Santhosh, who has three entries in the Limca Book of records for designing various innovative bikes, does not even have a professional degree. He completed 10th grade and did an ITI course after that.

Born in Moddigiri in Dakshin Kannada, he moved to Mysore when he was a kid. “It was my dad who inspired me to work in this field. He filled his enthusiasm and love for bikes in me,” Santhosh recalls.

“I was always interested in engines and automobiles. That’s why I used to keep experimenting with bikes,” he says.

Though financial restrictions posed an obstacle for him to follow his dream, Santhosh did not give up. He continued his studies and pursued his passion simultaneously by participating in different rallies, repairing old bikes and learning & researching about them. His love for bikes even took him to the Himalayas, where he participated in two bike rallies.

While he waited for the right opportunity, he kept his passion alive, and finally he managed to design his first bike called “Moosshiqk”, which made Santhosh win a position in the Limca Book of records. The bike is just 12 inches high, 18 inches long and weighs 8.8 lbs. The small size of the bike makes it stand out and maybe that’s why he named it “Moosshiqk”, which means a mouse.

The bike can ride at a speed of 15 km per hour. Moosshiqk is powered by electricity and can carry a man of 62 kgs for 15 minutes. Moosshiqk was also featured on “Ripley’s Believe it or not”.

Though fuelled with passion, it was difficult for Santhosh to continue experimenting due to financial constraints. Working full time in a pharmaceutical company and with family responsibilities, it was hard for him to sustain his “hobby”. But he was not one to give up easily. He continued experimenting in his spare time and used old materials to design the models with the help of some friends who were kind enough to support him.

He faced another big setback two years ago when his biggest inspiration – his father – passed away. Gradually Santhosh is regaining his passion and creativity and is all set to make new records with his latest “unimaginable” bike.

How the “unimaginable” works

The model was designed in Mysore by using parts from different motor- and e-bikes, and cost Santhosh Rs.60,000. “I used second-hand parts and motors from old bikes and experimented with the design to prepare the first prototype. Thanks to my friends and family for their support and for providing me the financial help to give shape to my idea,” he says.

The bike’s unusual riding position, which is almost parallel to the ground, has attracted a lot of curiosity. The small seat without any cushioning and a metal road for the body support seems like an uncomfortable position to ride in.

“Well, this is just a concept bike model right now which I designed to showcase a unique model of a bike. The model will be further modified in the future as per the need to make it more comfortable and user-friendly,” says Santhosh.

The idea behind the bike is to make the automobile industry experiment with unique designs. “Manufactures can take ideas from this design and create a model that could be used on roads and in practical life. This is just a concept right now,” he says.

The greatest innovations come from the most passionate people, and Santhosh has proved that if you are really determined and dedicated, there is nothing that can come in your way. While we wait on Santhosh’s concept bikes to develop further into working prototypes, we cheer the amazing creativity of this “non-engineer” who is making headlines across the globe.

For more information contact Santhosh at – santhosh.bikes@gmail.com or check out his blog.