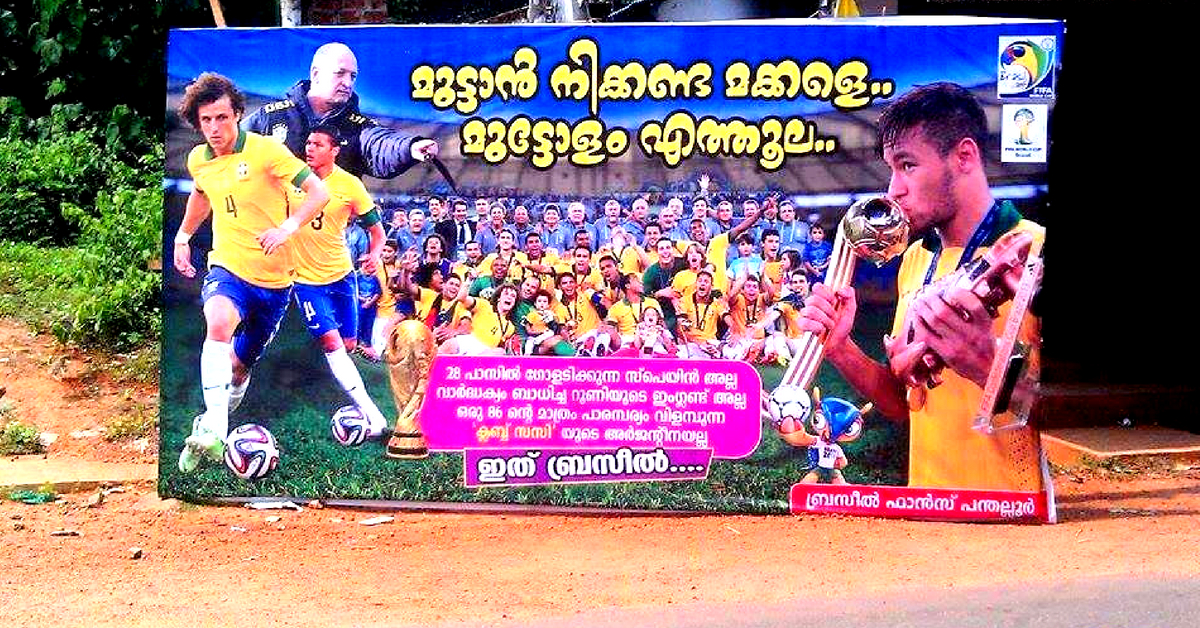 Kerala, like every other place, has been gripped by the FIFA World Cup fever, and fan clubs have printed flex boards in their team’s honour.

With the FIFA World Cup 2018 winding down to a close, the numerous plastic flex hoardings will be rendered quite useless. Well, fan clubs all over pay homage to their favourite teams via these huge flex boards, and understandably so. In Kerala’s Kozhikode, the scene is no different, and roadsides, pavements, terraces and any other available open spaces are full of huge flex hoardings, of their favourite teams and players.

With Germany, Spain, Argentina and Brazil, the lion’s share of flex boards is effectively ‘orphaned’, with no purpose left to serve.

Two organisations have joined together to put to use a large number of boards all over the city, reports The New Indian Express.

Blood Donors Kerala (BDK), a statewide non-profit organisation that arranges blood for patients and accident victims, has asked football fans to give them fading flexes, to make cheap house roofing for the needy. The Kozhikode district unit is pioneering this campaign.

To help residents of the district’s slums have a leak-proof monsoon.

Amjad, an executive member of the BDK, who is in charge of the programme, told The New Indian Express that many fan clubs had contacted the BDK, promising to bring the hoardings to the collection point, at Gujarati Street, Kozhikode, Kerala. The aim now is to make this a pan-Kerala campaign.

BDK has decided to target the tribal colonies of Wayanad and the Nilambur area of Malappuram district, for the second stage of the campaign.

Regional clubs have been contacting the BDK with questions on how to coordinate similar campaigns in their respective areas. This trend has surpassed football, with college authorities contacting them to know if their seminar banners will be accepted. Even fan associations of film stars have pledged to contribute.

The Flex Bank is an initiative by the Alappuzha district committee of the Kerala Sastra Sahitya Parishad (KSSP), and its volunteers are aiming to collect as many vinyl flexes as possible.

The FIFA World Cup is the ideal time for these flexes to be rounded up for good use. PVC, which is used in flexes, cannot be recycled, only burned or dumped. It doesn’t even degrade easily, and if buried, leaches harmful chemicals into the soil and groundwater.

Well, hopefully, this Kozhikode initiative will spread through Kerala and the rest of the country, wherever the needy require a cheap roof over their heads.