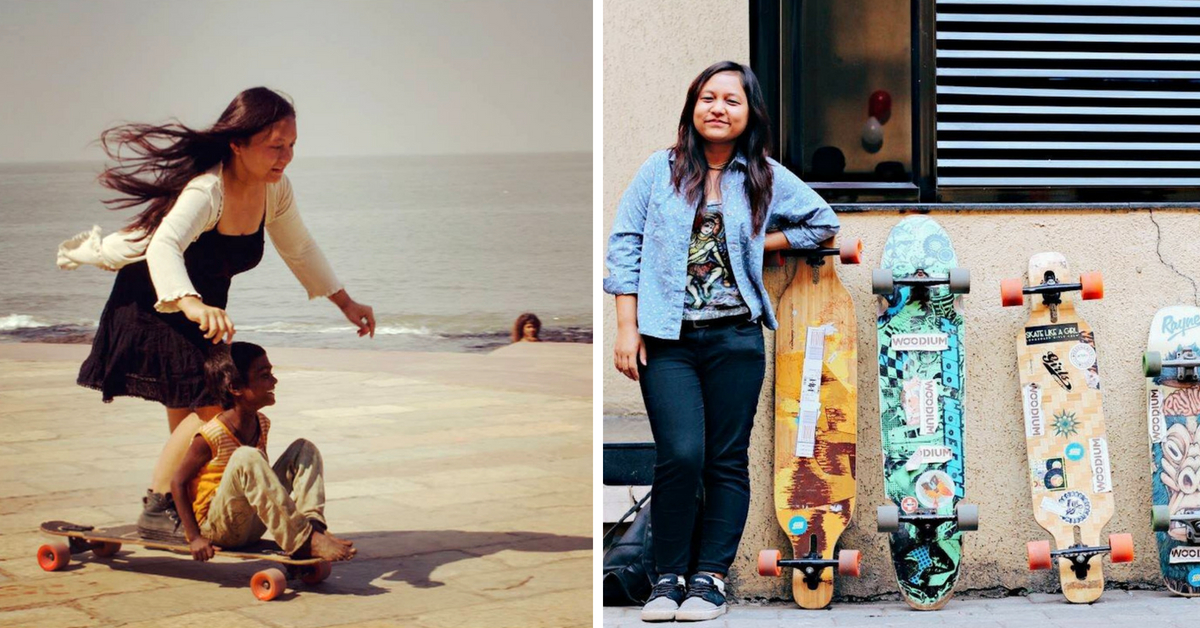 Passionate about popularising the sport among Indian kids (especially those from vulnerable backgrounds), Manipur’s Basica Salam also featured in Project Wild Women — a documentary about female athletes in extreme sports!

Have you heard of longboarding? If you live in India, chances are that the sport has escaped your attention. Unlike skateboarding, longboarding entails a longer board which offers greater stability and larger wheels for greater traction. It’s also more road-friendly than skateboarding.

Invented in Hawaii during the 1950s by surfing enthusiasts who couldn’t surf on days when the waves were weak, the sport is now trying to spread its wings in India.

Longboarding came to India in 2012, when a few avid skateboarders in Mumbai started the Longboard Crew India (LCI).

Among those propagating this unique sport in the country is Basica Salam, a 26-year-old Manipuri woman. She is among the two Indian representatives in the Longboard Girls’ Crew (LGC), a global community for women passionate about the sport based out of Madrid.

As a representative of the LGC, her task is to popularize the sport in India, especially among children from low-income families. She was also recently featured in Project Wild Women — a documentary about female athletes in extreme sports!

“There are very few women longboarders in India, and when I got a chance to be an ambassador for Longboard Girls Crew India chapter, I happily took up the offer with Kunjika Singh. This happened sometime towards the end of 2015,” Basica tells The Better India.

Her work for the LGC has taken her to colleges in Kerala and Pune, the remote village of Odisha and finally back home to Imphal. Her passion for the sport even led her to start a business which manufactures affordable longboards, since a single board costs anywhere between Rs 12,000-15,000 in the open market.

Unfortunately, it never picked, and Basica was compelled to shut it down. Nonetheless, that hasn’t deterred her from spreading the gospel of longboarding.

A graduate of literature and psychology, she began skateboarding in Mumbai purely as a hobby, but never pursued it seriously. However, it was a different story with longboarding.

“Well, I got into longboarding by chance. One Sunday morning in January 2014, I accompanied my friend Boris (the co-founder of Longboard Crew India) to his Longboard jam session. He convinced and helped me get on the board, and there was no looking back since. He is still the impetus behind my desire to go on and on despite the obstructions,” she tells The Better India.

As an ambassador for the LGC, Basica sought out various non-profits in Mumbai working with children, where she would teach the sport for free. Unfortunately, none came forward. Frustrated with the scene in Mumbai, she moved back home to Manipur last month, where the sport already has a foothold. The state hosted India’s first longboarding competition in March.

It’s barely been a month since Basica moved back home to Manipur after spending ten years studying and working in Mumbai. She is currently a teacher at a de-addiction center in Manipur, which also doubles up as a shelter home for abandoned kids born to parents with HIV. Among her most memorable experiences in popularizing longboarding across India came during her stint in the remote villages of Odisha.

“There was this time when the kids did not want to say goodbye after my workshop, and they sang some Odia songs for me. However, they also wanted to sing a song that I could understand, so they sang the National Anthem. Also, I recently went to a college in Kerala for a workshop, and I still get messages from the students I interacted with, and it feels lovely to see such happy, positive messages. It keeps me going and makes me want to check my messages,” she says.

Meanwhile, back in Imphal, she is happy to see the longboarding scene growing. Today, the state has around 50-60 cruisers, mostly made up of boys and young men. In the jam sessions she attends, Basica is the only woman among 50 other boys.

Making matters more difficult, the sport isn’t looked upon too kindly, and enthusiasts are chased away from sports complexes and open roads.

“Besides, skaters in Manipur are perceived as druggies and rowdies,” she says.

Big cities like Mumbai offer better arenas for longboarding since there is more space to practice, but backed by the LGC, Basica is determined to further propagate the sport in India.