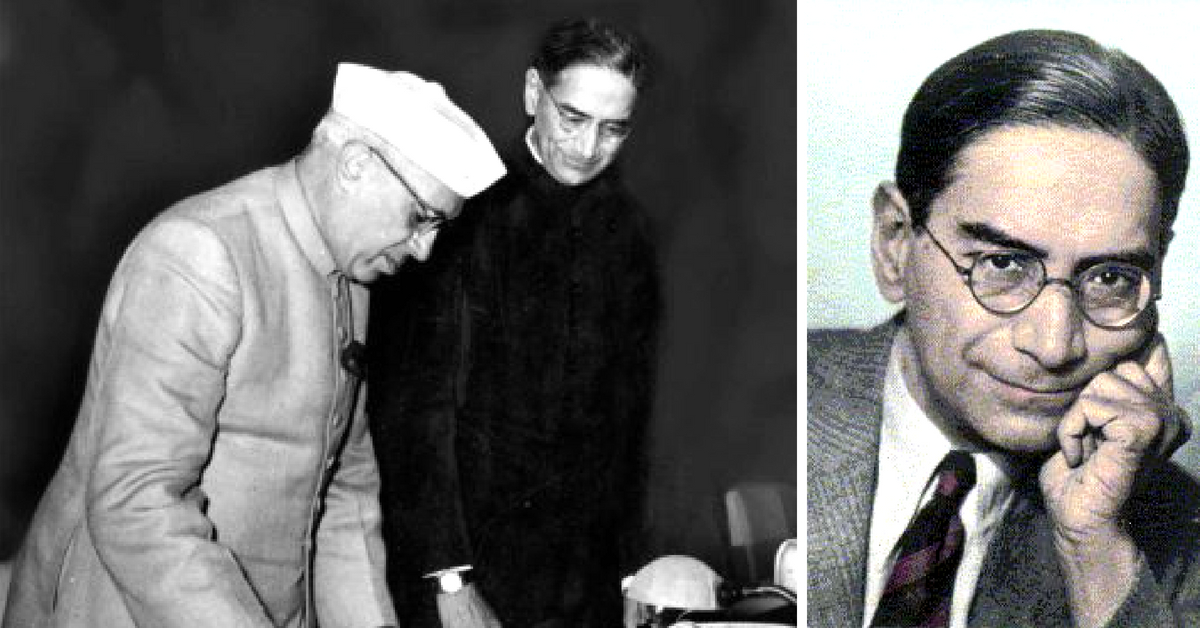 Rightly called the father of Indian statistics, #Mahalanobis was the brain behind NSSO, CSO and ISI! #NationalStatisticsDay #BirthAnniversary #GoogleDoodle

Today we celebrate the 125th birth anniversary of Prasanta Chandra Mahalanobis (PCM), the father of Indian statistical research and the brains behind some of Independent India’s most essential tools of governance.

Google even drew out a doodle in honour of the Bengali scientist and applied statistician who founded India’s oldest and most prestigious statistical institution.

Here are ten things to know about Mahalanobis:

1) Mahalanobis received his Bachelor of Science degree from Presidency College in Calcutta, where he learnt from some of India’s most distinguished scientists—Jagadish Chandra Bose and Prafulla Chandra Ray. Meanwhile, legendary astrophysicist Meghnad Saha and anti-colonial hero Subhash Chandra Bose were a year and two years junior to him, respectively.

2) He left for England in 1913 and studied at the famous King’s College, Cambridge. At King’s College, he would encounter mathematical genius Srinivasa Ramanujan and also come across Biometrika, a leading journal on theoretical statistics. Fascinated by its contents, he bought nine volumes to read on his voyage back to India. Reading the journal opened his eyes to new statistical models that could study and measure large-scale and complex phenomena.

3) On his return to India, Mahalanobis took up a teaching position in the physics department of Presidency College, Calcutta, and set-up a statistical laboratory in the early 1920s. Here, he combined his interest in statistics with other disciplines like economics, anthropology and economics to develop unique ways to estimate household consumption, crop yields and population.

We remember the contribution of Prof. PC #Mahalanobis in the fields of #Statistics, statistical system n economic planning on the occasion of #NationalStatisticsDay…Let us create public awareness about the importance of statistics in socio-economic planning n policy formulation pic.twitter.com/fBGPL70HDS

4) Mahalanobis treated statistics as a “new technology for increasing the efficiency of human effort in the wildest sense”. Most famously, he analysed 60 years of data regarding the floods in Odisha and published his findings in 1926, which three decades later laid the foundation for the construction of the Hirakud dam on the Mahanadi river.

5) In 1931, Mahalanobis established the famous Indian Statistical Institute—a specialised institute to facilitate research and learning of statistics within the premises of Presidency College. Two years later, he set up Sankhya, the Indian Journal of Statistics.

6) He Came up with the famous “Mahalanobis Distance”, a measurement often used in studies of population distribution. Want to understand the concept further. Watch this video:

7) The National Same Survey (NSS) was his brainchild. Launched in 1950, it was a herculean task towards providing a comprehensive representation of India’s economy. “In first rounds of research, 1833 villages and residential areas were surveyed. This limited sample was used to represent the nation as a whole, which totalled roughly 360 million people at the time,” says this University of Cambridge tribute to Mahalanobis. Through his work, he laid the “foundations of the Indian statistical system through the National Sample Survey Office (NSSO) and the Central Statistical Organisation (CSO),” writes Atanu Biswas for The Indian Express.

8) As a member of the Planning Commission, Mahalanobis extensively contributed to a young India’s Five-Year Plans beginning from the Second. The second five-year plan, under his direction, came up with the Mahalanobis Model, which directed the course of India’s economy until the advent of liberalisation in the early 1990s.

9) Under the direction of Mahalanobis, ISI truly became a world-class institution attracting the best minds in India. The ISI also drew effusive praise from across the world. In fact, the first statistical institute established in the United States by Gertrude Cox was based on the ISI model.

10) Mahalanobis shared a close relationship with Rabindranath Tagore, who in fact wrote in the second volume of Sankhya: “These are the dance steps of numbers in the arena of time and space, which weave the maya of appearance, the incessant flow of changes that ever is and is not.”

However, his enduring legacy can be summed up by what Polish statistician Jerzy Neyman once wrote. “PC Mahalanobis was not just a professor of statistics, as there are thousands of them all over the world. He did more. He tried to do something effective about the problems discussed.”

It is great to see Google honouring Prasanta Chandra Mahalanobis with a doodle. While he is celebrated for his statistical genius, his role as a Nehruvian economist became controversial because he planned for steel without food. #PCMahalanobis