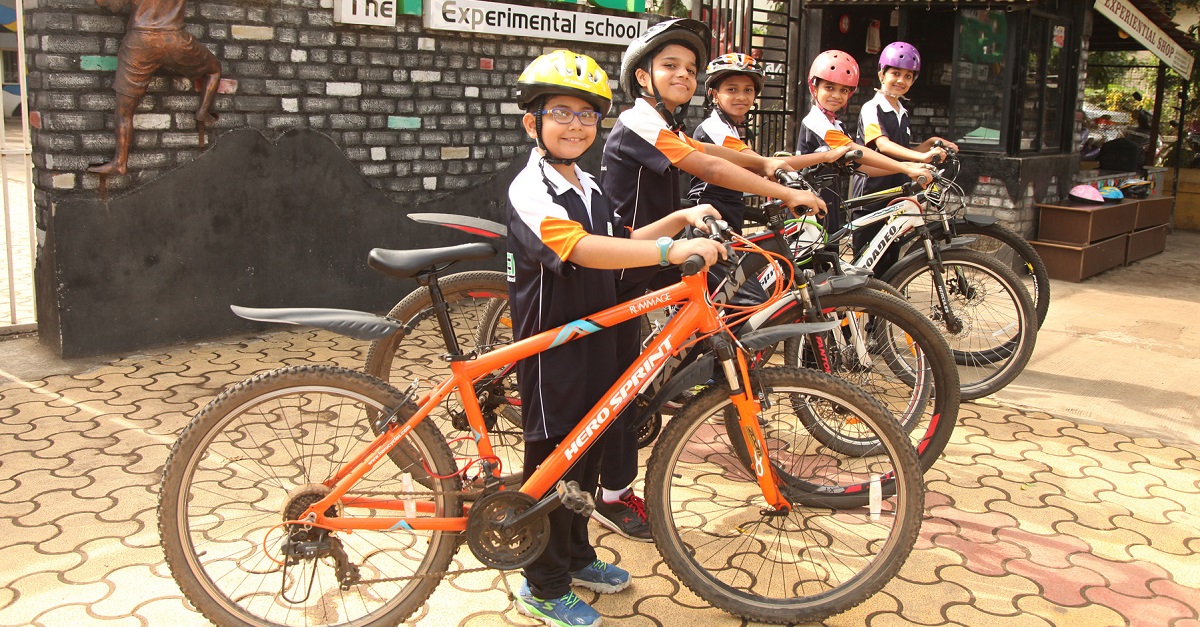 To inculcate traffic rules right from childhood, these 13-year-olds have launched an Online Traffic Awareness Exam on www.mybicyclelicense.com for school-going kids. On passing the test, kids get a Bicycle License. The project was shortlisted for the ‘I CAN Awards 2017’ organised by Design for Change.

Sixteen children die on Indian roads daily. Seeing this statistic, students at Espalier Experimental School in Nashik were concerned about how unsafe Indian roads have become. One of their teachers lost her life in an accident, and many of the children also met frequently with accidents when they came to school by bicycle.

A group of 13-year-olds from the school decided to take matters into their own hands. The 8th graders realised that awareness about road safety and traffic rules needs to be inculcated in people right from childhood. To do this, they created a website to conduct an Online Traffic Awareness Exam, on passing which school-going kids can acquire their Bicycle Licenses.

Concluding that the rules that apply to two-wheelers should also apply to bicyclists, the students realised that children could begin to learn these rules at a young age. The students were inspired by the 4-step formula of Feel-Imagine-Do-Share, developed by Design for Change.

This is a not-for-profit organisation that challenges children to solve problems in their community.

To conduct the Traffic Awareness Exam for students, the children started a website called www.mybicyclelicense.com, under the mentorship of Sachin Joshi, the founder of Espalier Experimental School.

After much research, they framed over 75 questions on traffic rules. The website hands out bicycle licenses to people who acquire higher than 70% marks in the online exam. “Kids love to collect cards of all kind,” explains Sachin Joshi, adding, “That is the psychology at work. So this project plays with that idea!”

The website generates a certificate that the children can proudly show to their friends, but to get it, they have to study the traffic rules first and pass the test.

Dr Ravinder Singal, the Police Commissioner of Nashik, agreed to a Round Table Conference with the children and lent his full support to the Bicycle License Project. They also met the Commissioner of RTO, Bharat Kalaskar, for guidance, who expressed his interest in working towards conducting this online test for Bicycle License all over India through RTO.

The software company ESDS helped the students in making the online exam free of charge.

After conducting the exam across ten schools in Nashik in 2017, the children wanted to expand the project’s reach. A boon came their way when the Education Officer of Nashik Municipal Corporation, Nitin Upasani, issued a government circular to all Nashik schools making the Online Traffic Awareness Exam mandatory for all students.

To create enthusiasm for the project, the children wrote a song about traffic rules called ‘Sonu’ that they published online. 3,000 students have so far received a Bicycle License. Outside of Nashik, Ahmedabad’s Riverside School has also conducted the Online Traffic Awareness Exam so far.

This year, the students want to achieve a target of 10,000 students.

And over the next three years, they would like 50,000 students all over India to have their Bicycle Licenses.

Another thing that’s great about the Online Exam is that it makes it mandatory for people to fill in their mother’s name into the data fields, hence including both the father’s and mother’s names as the ‘middle name’ on the eventual certificate. This has been a practice followed at Espalier Experimental School since the past few years.

In 2015, students at Espalier had come up with a Design for Change project called ‘Take Pride, Add Mother’s Name‘, to campaign towards making it mandatory to include the mother’s names in official documents. Since then, the students and staff have maintained this practice.

By including this practice in the Bicycle Licenses as well, the children hope to give out an indirect message about gender equality to everybody who takes the test.

The project was recognised for its ‘Long Lasting Impact’ at the ‘I CAN Awards 2017’, making it among the top 20 stories of the year. Since 2009, the award ceremony that’s organised by Design for Change has attracted 14,000 stories of change from school children all over India. The event is to recognise children who are making social change in their communities and inspire them to believe that they can effect change in the world.

“We hope to reach the PM’s office one day and make the Online Traffic Awareness Exam mandatory for all school children to take. This will help inculcate traffic rules for road safety from a young age.”

Help spread the Bicycle License project for road safety by these school children. Share the website link for www.mybicyclelicense.com.

Be a part of one of the largest global movements of children driving social change in their communities. Take up the ‘I Can’ School Challenge. Find out more online, or reach out to Design For Change on +91-95999-16181.