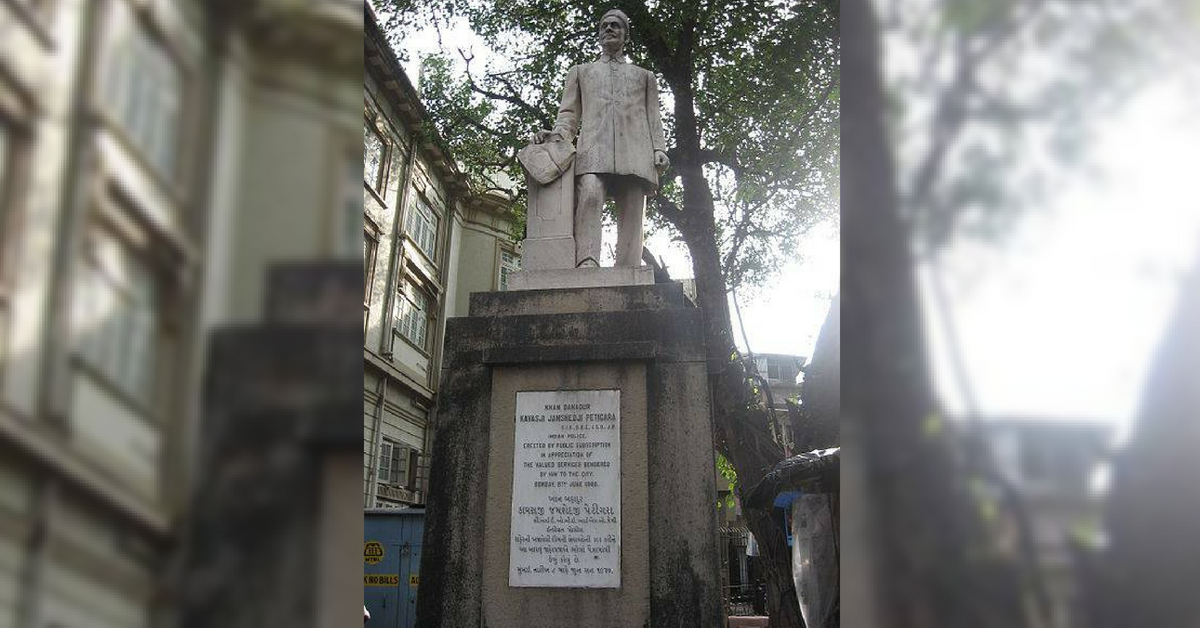 Kavasji Jamshedji Petigara has a statue dedicated to his honour, in Mumbai. Image Credit:- Mangesh Sirdeshpande‎

This was in an era long before the city was called Mumbai, and even before India had gained independence.

In the year 1926, Kavasji Jamshedji Petigara became the first Indian to head the Bombay Crime Investigation Department (CID), as a Deputy Commissioner of Police. Since then, Bombay became Mumbai, and the CID has seen several legendary bosses.

However, it was Petigara who remained in memories, and that is largely thanks to the most high-profile arrest he had to make regularly.

The ‘criminal’? Mahatma Gandhi! And strangely enough, Gandhiji also insisted that Petigara be there every time he was arrested!

The first time Petigara arrested the Mahatma was during the peak of the ‘Quit India’ Movement. He was among a group of officers who arrested Gandhiji from Mani Bhavan.

Gandhiji trusted Petigara and understood that the CID Chief was merely doing his duty.

They had a deep understanding of one another. And here’s an anecdote to prove it. According to Petigara’s grandson Kavas in The Indian Express, when Gandhiji went to attend a roundtable conference in England, he needed two recommendation letters. One such letter came from Petigara, and it is still kept at Mani Bhavan.

Interestingly, the CID Chief’s grandson remembers quite a few anecdotes about his famous grandfather.

Another interesting story is that of Dr Gilder, who was a famous Mumbai-based surgeon, and a Gandhian. One day, Dr Gilder was treating Petigara, when the news came that Gandhiji was courting arrest in the city.

Though his loyalty and duty as a Gandhian required him to join the Mahatma’s protest, Dr Gilder sent word to Gandhiji saying he could not join him, as he was treating the CID Chief.

Gandhiji readily agreed, and the surgeon stayed back to treat Petigara.

The connection between Gandhiji and Petigara ran deep even in a tragic time. Petigara’s son was the assisting solicitor to the special public prosecutor, in the Gandhi murder trial.

It is interesting to note that Petigara had no formal police training, and joined the force in 1903 as a plainclothes policeman, also known as a “safedwala”. It was his crime-fighting ability, intelligence, meritorious service and loyalty, that saw him promoted to Inspector of Police, in 1909, after just six years of service.

In the year 1919, he was promoted to the Rank of Superintendent of Police, Bombay, and on February 1st, 1928, around nine years later, he was the first Indian to be promoted to the rank of Deputy Commissioner of Police, by the British.

Petigara was placed in charge of the Bombay Police’s Crime Branch, a post he held for a decade.

The man was equally trusted by both the British and the Congress party, thus indispensable for both.

Happily, Petigara’s services to the city and the nation have not been forgotten. A statue of him was erected, for “valuable services rendered to the city”. Located near Metro Adlabs in South Mumbai, the statue today is a landmark, easily recognisable from afar.

The statue was unveiled by Sir CP Ramaswamy Aiyer, Dewan of Travancore, on 8th June, 1940, while an armed police contingent presented a Guard of Honour.

After his retirement, Petigara was appointed as the estate manager of Prince Aly Khan, at Aga Khan building at Dalal Street in Mumbai. He was well-loved. The Viceroy of India and the Governor of Bombay praised his wisdom, popularity and eagerness to do his duty and his gallantryin fighting crime.

You may also like:- Inspired by Gandhiji, How This Freedom Fighter Brought Together Over 2500 People

After living a full and illustrious life, the first chief of the Bombay CID breathed his last on 28th March, 1941, six years before India gained independence.