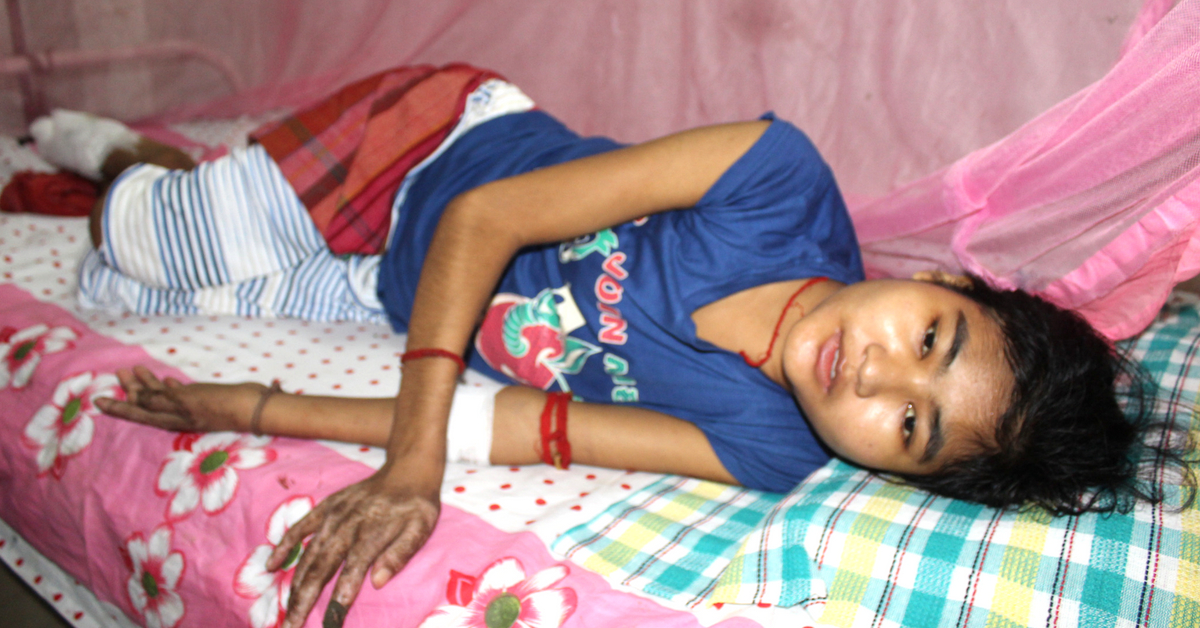 “If I can’t be a champion anymore, I will make a champion,” says the determined 21-year-old who teaches village kids despite the decay of her fingers and toes due to a rare ailment!

For 21-year-old Gahela Boro, who is an ace archer from Assam, life has thrown some seemingly insurmountable challenges. After winning gold in the 2015 National Games in Kochi, she had no idea what life would have in store for her. She would find out more than a year and a half later.

In November 2016, she was diagnosed with a rare disease called Systemic Lupus Erythematosus (SLE) and Anti Neutrophil Cytoplasmic Antibodies (ANCA) resulting in the decay of her fingers and toes. Following the diagnosis, she was admitted into the Gauhati Medical College and Hospital on November 13, 2016.

With her condition getting worse, the GMCH referred her to AIIMS New Delhi in the same month for advanced treatment. Her parents, who work as daily wage labourers, had no way of funding her treatment in Delhi. Due to financial constraints, Gahela’s family were compelled to bring her home.

Gahela was bedridden at home for a few months in New Amguri village in Kokrajhar district, when few well-wishers decided to circulate her story around social media.

The autoimmune disease has cost Gahela her toes, while her fingers remain damaged. Once the news of her condition spread, a team made up of volunteers from various non-profits and student groups, visited the village and brought her to the Kokrajhar Civil Hospital on April 5, 2017. After receiving permission from district authorities, she was airlifted to AIIMS on April 9, 2017.

During the few days in Kokrajhar and subsequently when Gahela was admitted in AIIMS, the Discovery Club, the People’s Aid (both local non-profits) and the All Bodo Students Union conducted campaigns on social media and set up a crowdfunding campaign to arrange the necessary funds.

The crowdfunding campaign raised about Rs 5-6 lakhs. After the NGOs ran out of money, the Union sports ministry decided to foot her medical bills.

After she was discharged from AIIMS on May 21, funds from the ministry stopped flowing. Subsequent stories of her plight in the national media in the following months, however, resulted in the sports ministry once again sanctioning an ex-gratia assistance of Rs 2 lakh from the ‘Pandit Deendayal Upadhyay National Welfare Fund for Sportspersons’ for her medical treatment.

In fact, Gahela has reportedly received funds to the tune of Rs 12-13 lakh coming in from well-wishers from around the country, the Assam CM, the local MLA, All Bodo Students Union, Bodo Territorial Council and the sports ministry, but life remains exceedingly difficult for her.

“Her disease is incurable but treatable. She will have to take medicines worth Rs 15-16,000 per month, all her life. Her parents are daily wage labourers, and they can’t afford treatment. She also needs to fly into Delhi once a month for check up with AIIMS,” says Morin Daimary, Secretary of the People’s Aid, speaking to The Better India.

Gahela recently won the silver medal at the Bodoland Territorial Area Districts archery competition, despite no practice and under extreme pain.

“I cannot imagine life without archery. It’s something I have been passionate about since I was 12. I don’t want my disability to hold me back. I want to represent India at the international level and win a medal to honour all the people who have helped me so far,” said Gahela, speaking to TBI.

“I am worried about my future. What will happen if I pass away silently without achieving anything? I wouldn’t mind even competing in the Paralympic trials to represent India in world tournaments,” Gahela added.

She is aware that the Assam government cannot foot her medical bills all her life, and wants it to offer her a government job so that she can look after herself and continue pursuing archery.

Gahela leads a tough life, but instead of wallowing away in sorrow, Gahela has shown immaculate character and trains local village children willing to learn archery.

In a day she steps out of her house on only two occasions—her morning walk, where, “nothing but thoughts of representing India” occupy her mind, and a few hours after breakfast which she spends practising and teaching local villages children archery at the local village ground.

“Despite her poor health, she trained approximately 20 village children in archery, borrowing equipment from her friends,” says Morin.

“If I can’t be a champion anymore, I will make a champion. I want to start my own Archery Academy to practice and train kids from my locality,” says Gahela.

Due to her condition, it’s excruciatingly hard for her to compete with a normal bow, which she does with extreme pain. With a weak grip and toeless feet, her posture takes a beating.

“Since she finds it very hard to draw a normal bow, Gahela is trying for a compound bow used in modern archery. Unfortunately, she can’t afford it now,” adds Morin. Any hopes of returning to archery hinge on her ability to acquire a compound bow.

Morin claims that the government is yet to reimburse Gahela for various expenses she has borne thus far. “Despite submitting receipts, there hasn’t been much progress,” says Morin.

Also Read: Manipur to Get India’s 1st National Sports University: 8 Things We Hope It Has!

It’s hard not to be drawn in by Gahela’s absolute determination to compete and serve those around her. For someone who started playing the sport at the age of 12, and by 21 had nearly everything taken away from her, it’s a testament to Gahela’s spirit and courage that she hasn’t given up yet.

It’s all well, and good to see those in positions of authority say ‘Hum Fit Toh India Fit’, but here is a real athlete, who isn’t looking for a handout, but another shot at a decent life and possibly an opportunity to represent her country.

Last week (July 9) Sports Minister Rajyavardhan Singh Rathore sanctioned Rs 5 lakhs to Gahela Boro for her medical treatment. However, more than money, Gahela needs a government job so that she can look after herself and continue pursuing archery.

If you want to help Gahela fulfil her dreams, you can donate to her account. The details are as follows:

You can also reach out to Morin Daimary, Secretary, The People’s Aid for further assistance. He can be contacted at 09706679711. Email: morindaimary@gmail.com.