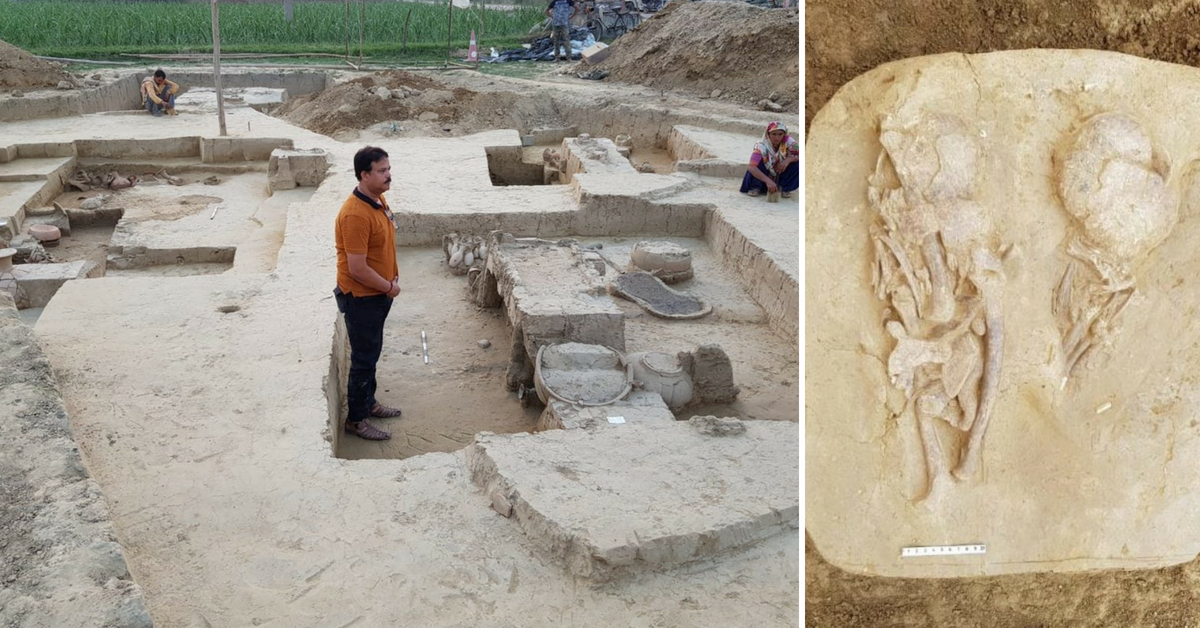 ASI has unearthed eight burial sites, the remains of two chariots and several artefacts, including three coffins, antenna swords, daggers, combs, and ornaments, among others. But what makes it so special?

Back in 2005, in the village of Sinauli, Uttar Pradesh, farmers came across remnants of pottery next to an ancient human skeleton. The farmers didn’t know that it was an ancient burial ground dating back to the late Harappan period, about 4000 years ago.

The Archeological Survey of India was quick to take up the sites for examination. The excavations yielded findings that included 126 skeletons, bead necklaces, copper spearheads, gold ornaments and a few anthropomorphic figures which were typical of Harappan settlements.

And since then Sinauli has been an intriguing site, as the findings can connect the dots and solve, at least, one possible shroud of mystery of the past.

Fast forward to 2018, when the Sinauli excavation site is back on the radar with some curious findings.

ASI has unearthed eight burial sites, the remains of two chariots and several artefacts, including three coffins, antenna swords, daggers, combs, and ornaments, among others. Officials told The Times of India that the three chariots found in burial pits indicate the possibility of “royal burials” while other findings confirm the population of a warrior class here.

SK Manjul, Co-Director of Excavations and ASI’s Institute of Archaeology, Delhi told the publication, “The discovery of a chariot puts us on a par with other ancient civilisations, like Mesopotamia, Greece, etc. where chariots were extensively used. It seems a warrior class thrived in this region in the past.”

The findings of the Copper-Bronze age dating back to 2000-1800 BC, have opened up further research opportunities into the area’s history and culture.

The chariots and the coffins particularly intriguing as there have never been findings that dated this long ago. Further, the discovered coffins were found to be decorated with copper motifs, which has never been seen before.

“For the first time in the entire subcontinent, we have found this kind of a coffin. The cover is highly decorated with eight anthropomorphic figures. The sides of the coffins are also decorated with floral motifs,” Manjul said.

Combined with this, the swords, daggers, shields and helmet seem to suggest the existence of a warrior class with expertise in sophisticated craftsmanship.

While it is difficult to ascertain the new findings unlike the 2005 ones, Manjul asserted that the chariots and coffins did not belong to the Harappan civilisation. He said the similarities could have been an outcome of the migration of the Harappans to the Yamuna and the upper planes during the late mature Harappan era.

In conclusion, Manjul told The Print, “The new discoveries, especially those of the chariots are a landmark moment since no such physical evidence has been found at a contemporary Harappan site.”