Bengaluru Folks Save 108 Trees From Being Axed, Transplant Them to Hospital Grounds! 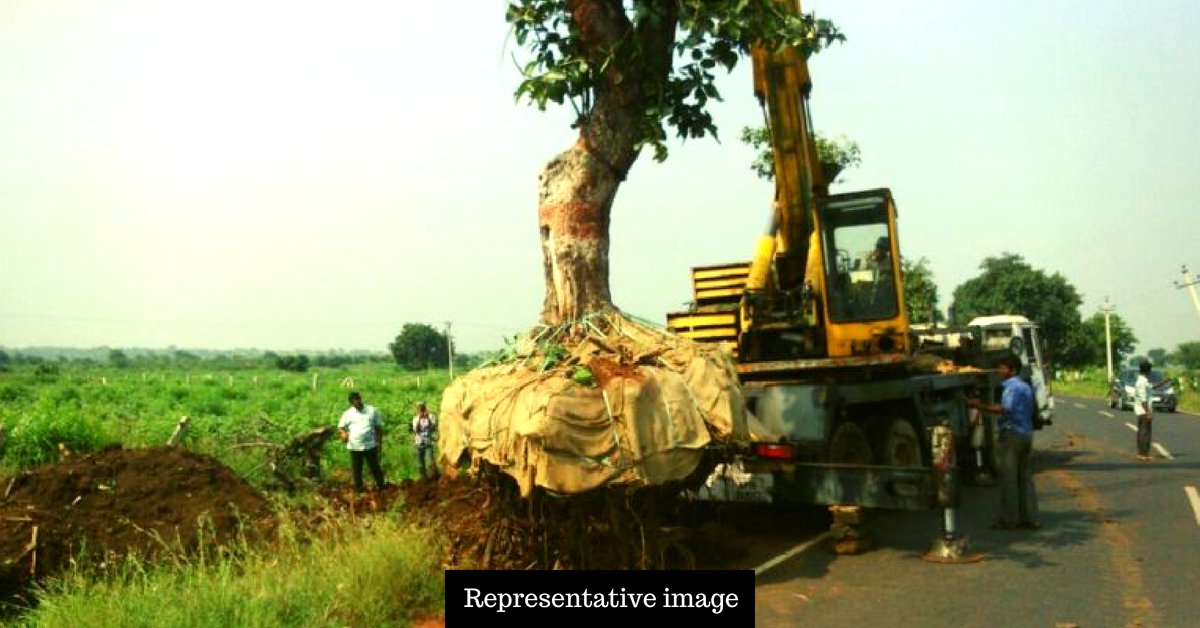 When it comes to tree conservation, seldom do we think about relocating them and for obvious reasons. Many of us are not aware that full-grown trees can be transplanted if they face the danger of getting felled.

When Namma Metro wanted to pull down 115 trees in Whitefield for the construction of a new metro line, a group of inspired citizens and a hospital came together to transplant them and achieved 100% success!
How did they do it? Can we replicate this?
“I have transplanted trees before in different areas of Bengaluru like Sarjapura and Kanakpura, but this was something exceptionally phenomenal!” says Vijay Nishant, a much sought after Urban Conservationist, popularly known as the ‘Tree Doctor’.
For ten years now, he has been striving to rescue and rehabilitate trees and urban wildlife. The government of Karnataka awarded him with Asamanya Kannadiga Award (Extraordinary Citizen of the State) in 2017.
“To relocate 108 trees, with each of them not just surviving but thriving gloriously, and all done in a matter of six months and a spirit of pure selflessness by a voluntary citizen group – this is unprecedented, not just in Bengaluru but perhaps the whole of India!” Vijay’s excitement was infectious.
It was August 2017. The construction of the new Metro line connecting Byappanahalli to ITPL was on in Bengaluru.

Ram Kanala, a software architect, working in IBM, looked out of his office window one day and noticed that trees were being felled by the BMRCL (Bangalore Metro Rail Corporation Ltd) to make way for the Metro line.

Bengaluru was once called the ‘Garden City of India’. Let alone gardens, even street-side trees are now not spared, ruminated Ram.
He decided to approach the BBMP (Bruhat Bangalore Mahanagara Palike) officials to explore ways of protecting this precious green cover.
Why not transplant them? He suggested to them.
But the BBMP officials outrightly rejected his idea saying that these were big trees and will not survive such an operation.
Ram, however, was not convinced. He wanted an expert opinion on this. So he went to the Indian Institute of Science (IISc), Bengaluru, and spoke to the scientists there. They wanted more data on the size, type and species of the trees.

Ram not only furnished them with the relevant information but also had detailed discussions with them to understand and explore the feasibility of the tree transplantation idea.

Finally, after analysing the data, the scientists concluded that it was possible, and was, in fact, worth a try. But it had to be done by an experienced “tree doctor”.
It is then that Ram connected with Vijay – who is known for his ‘Tree IQ’, and in 2010 had in fact launched Vruksha.com, a first of its kind biodiversity portal, to provide a detailed tree census of urban areas. It involves mapping of trees by street location and by species.
For the tree-passionate Vijay, cutting a tree was like, as he said, “cutting my heart”. So he jumped at this opportunity to save the 115 trees about to be cut by the BMRCL.
The Vijay-Ram team went back to the BBMP, now armed with the scientists’ recommendation for tree transplantation.
After a series of meetings with the officials there, Ram-Vijay finally got permission to undertake their operation.
The first hurdle was crossed, but they knew there were many more to come. It was not going to be an easy task as the trees were fully grown, and their roots, in all likelihood, had spread 10 feet underground in all directions.
However, the next big challenge was – where to transplant them to? They had to find new shelter for these 115 ‘sturdy green soldiers’.

Finding a New Home for the ‘Silent Green Soldiers’ in the Sathya Sai Hospital:

“I approached several top software firms in the EPIP (Export Promotion Industrial Park) area who are indeed going to benefit from the new metro line, to spare some land,” Ram recounted his adventure, “but given how expensive real estate is in Bengaluru, everyone refused – citing space constraints as an excuse.”
Ram was frustrated, but he didn’t give up. One day, while driving past the area, his eyes fell on the lawns of the Sri Sathya Sai Institute of Higher Medical Sciences (SSSIHMS), a free super speciality hospital.
As a last-ditch effort, with little hope, he emailed the director of this hospital with his plea.
“In no time, I received a reply offering full cooperation. I was simply thrilled!”
With the land-issue sorted out, the jubilant Ram now got into mission-mode, forming a cohesive team of BMRCL engineers and workers, nature enthusiasts, EPIP area administrators, SSSIHMS senior managers and garden supervisors, and green social workers –a committed group of twenty or more.
SSSIHMS, in fact, has close to 600 trees of more than 30 species and is a prized lung-space in the highly-congested and densely-concretised Whitefield area.

Additionally, it has to be pointed out that the Metro line would be beneficial to the hospital itself, which receives patients from around India. Once the new metro line becomes operational, they would be able to travel to the hospital with ease, not to mention the hospital’s staff.

“While all of this was heartening,” recalled Praveen, special assistant to the hospital’s Director, “at the same time, we could not see trees being chopped down for this convenience.”
They have made similar decisions before. For example, employees of an adjacent IT company wanted to plant fruit trees in the hospital premises, and the Director had welcomed them too.
With ITD Cem India, the contractors of BMRCL (Bangalore Metro Rail Corporation Limited) to construct the new metro line, enthusiastically coming forward to lend their machinery and workers for this project, the work began in right earnest in December 2017.

Out of the 115, six trees could be left untouched, thanks to a slight tweak in the route. The rest 108 had to move.

Tree transplanting is an elaborate process. One half involves marking, diligent digging, root-bowling, disinfecting, pruning and crane-lifting. Simultaneously there is new-pit preparing, soil culturing, manuring, supplementing with root formulations and protecting the tree with fungicides and medicines. Then there is the replanting, watering, and finally checking for any ‘post-operative complications’ and taking quick remedial action till the ‘patient’ is stable.
“You need specialised cranes for this activity, but it is difficult to find them in India,” explained Vijay, “In fact, if we had access to them we wouldn’t need to prune the trees.  Sadly, we had no option here but to do away with their branches and leaves to enable the operation.”

You may also like: Once ‘Waste’, Offerings in These Mumbai Temples Now Nourish 150 Trees

When the first tree was uprooted, Vijay and the team were highly anxious. They did everything as per the rule book within the infrastructure constraints, and waited with bated breath to see if their ‘patient’ would come back to life after the ‘transplantation surgery’.
A couple of weeks passed. Inspecting, watering, and manuring continued. Then, on 15 January 2018, came the good news! Not only the first tree but several others too were ‘green smiling’ with their fresh shoots and leaves.
“This was thrilling! Our enthusiasm tripled,” said Vijay excitedly.
“To me what we have achieved in this hospital is nothing sort of a miracle,” he asserted, “In all my previous tree transplant endeavours, I had seen only 30-40% success. But here all the 108 trees sprung to life seamlessly and in a matter of few months!” Vijay said.

This project was so close to Ram’s heart that he spent over Rs 45,000 procuring chemicals, sand, red earth and procuring tankers to water the plants regularly. He spent long hours on weekends, supervising the transplantation.

At times, he did this even during the work days and compensated it by working late into the evenings to catch up with his official duties.
“It was a tough task, but a very fulfilling one,” Ram happily recounted, “I have some very cherished memories from this exercise.  I recall one evening, we did not have adequate water for the freshly transplanted trees. Along with Nagraj, the hospital’s landscaping supervisor, I went in search of a tanker. It was almost 9.30 pm when we located one near Vydehi hospital. When we explained our urgency to the tanker owner, he readily agreed to provide a full tank free of cost.”
The project indeed witnessed many such stories of cascading-compassion. The alumni from 1996-batch of Sri Sathya Sai Institute of Higher Learning, to quote another beautiful instance, voluntarily collected resources to take care of the entire expenditure of this project.
A moral boost to the whole activity was the Director of the hospital himself visiting the site frequently to check the health of his ‘new patients’. Soon the ‘green word’ went around and keen environmentalists and green social workers too dropped in and kept the inspiration-engine running.

On May 26, 2018, SSSIHMS organised a special function christened as “Green Century” to celebrate the project’s completion as well as to felicitate every participant of this unique endeavour. Noted Kannada filmmaker, actor and director, Suresh Heblikar who is also a well-known environmentalist, was present to grace the occasion.
Now that the work is accomplished, how does Vijay feel?
“Professionally, yes, it was a great achievement for me, and I will be lucky if I can replicate this elsewhere. More importantly, it has given me a formula for success for all my future sustainable development initiatives. I want to call this – the ST-UT-PT formula.
ST – Sensitivity towards our Trees – we have to feel for our green neighbours!
UT – Unity of Energies – inspired people have to come together, then incredible things can happen!
PT – Power of Positivity – when you work with selfless minds and institutions, success and satisfaction is guaranteed!
“Truly, I feel humbled to be part of this noble work. I connected with so many good people whose motto in life is to only serve without any expectation. This indeed has been my life’s most heartwarming work to date.” Vijay signed off with a satisfactory smile.

You may also like: 24 Trees Were Cut for a Billboard but Bengaluru Folks Brought Them Back!

One of the most debated topics in the current times when it comes to nature conservation is ‘how can we do development if we don’t want to lose our green cover?’
Perhaps, Vijay, Ram and the Sai Hospital have demonstrated one beautiful way.
In fact, inspired by this experience, now BBMP and BMRCL have started proactively transplanting trees on the new Metro rail routes.
That’s the way to go, Bengaluru!
(Edited by Vinayak Hegde)