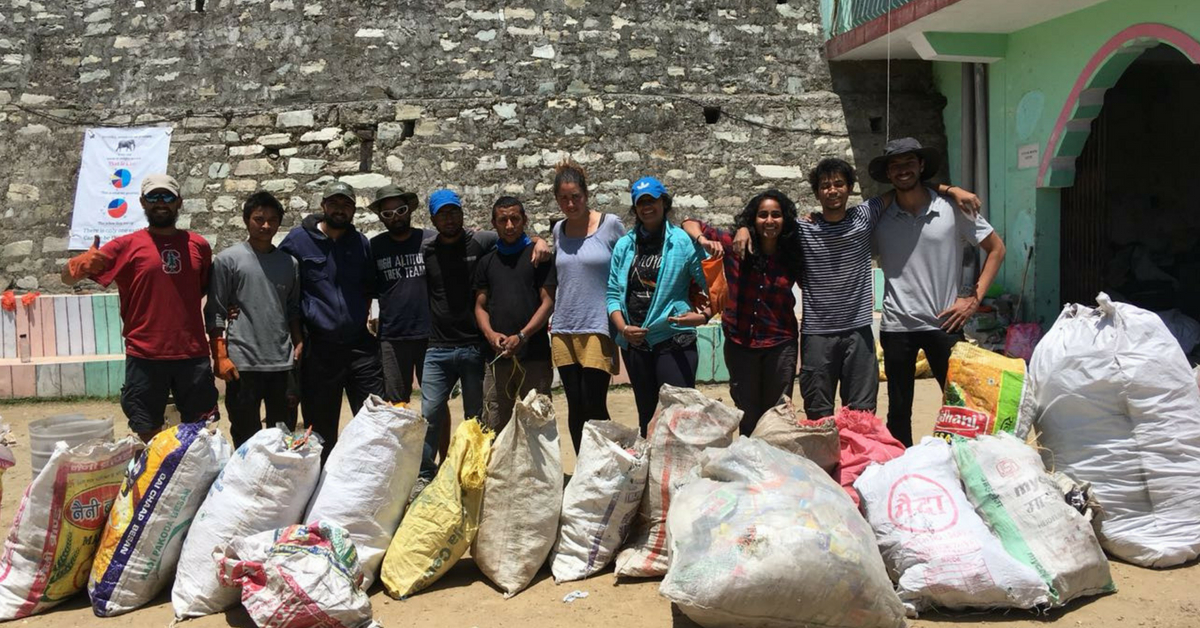 The hikers, visibly pleased with the collection, segregation and disposal of waste. Image Credit: India Hikes

Hike, and spread the word of responsible waste management, if you truly love nature!

Going for a hike, or a trek is one of the simplest ways to have a good time. The great outdoors beckons hundreds and thousands of enthusiasts, who want to discover unchartered territories.

Well, as we have explored the outdoors over time, we have also contributed to dirtying them. It isn’t uncommon to go on a trail and find it littered with plastic and non-biodegradable waste. This initiative has decided to tackle the waste problem on mountain trails head on and has even involved the local community–encouraging them to be responsible about waste-management.

The Green Trails Mission by India Hikes aims to leave the mountains in a better condition than they currently are. Each month, staff and trekkers, collaborate with the local population, in order to bring down tons of waste from the mountains. That waste is then segregated, to reuse and recycle.

We, at The Better India spoke to Lakshmi, who heads Green Trails, to find out how their waste management model works and how it helps those involved.

Lakshmi says, “The villages and the mountains lack a proper waste management system, which has caused open garbage dumping practices within and outside the villages, by inhabitants and visitors.”

Segregation of waste is not practised in these villages due to the lack of waste collection units. Plastic is also widely used. The result is that garbage is collected, dumped along the mountain slopes, or burnt.

She shares, “The roads and trek routes have a lot of non-biodegradable waste, like plastic food wrappers, bottles and tins, causing a serious threat to the environment of the mountain ranges.”

She notes that a very small percentage of the non-biodegradable waste is reused, and the rest is sold to scrap collectors. The collectors are only interested in bottles, newspapers and tins, and leave out the other waste materials like bags, covers, glass bottles, packaging wrappers, etc., which also pose a threat to the environment.

Apart from the occasional clean-up drives and education campaigns run by some NGOs at certain villages, no other steps are being taken to ensure the safe disposal of waste. Establishing a proper and sustainable long-term waste disposal system is paramount so that the area remains clean.

“The initiative of Green Trails, was started to curb the waste trekkers leave on their trails,” says Lakshmi, adding that the initiative has embarked upon a mission to clean up.

She tells me that they provide eco-bags for trekkers. These bags are small enough to be tied around the waist like a belt. These can act as waste-collection bags, and trekkers are encouraged to pick up not only their waste, but anything else that they find, be it chocolate wrappers, or plastic bottles.

She shares that some dhabas were also requested to change their menus, to minimise the amount of trash generated.

Once the waste is collected, it is time for segregation.

She notes further that they constantly try to reduce the waste on treks in two ways–firstly, by reducing the amount of waste generated, and secondly, avoiding the carriage of disposables and packaged food.

Green Trails also decided to involve the local population-that acted as powerful change agents, at their base camps, and this is what happened.

Sari:-
This base camp had a school nearby, and its adjoining areas were very dirty. The team decided to clean up the areas, and install dustbins. At one site, the team found that there was a big hole dug–collecting both organic and inorganic waste.

Thus began the mammoth task of clearing the hole and segregating the waste. The local students there learnt the importance of proper waste disposal, and eagerly got their hands dirty for nature’s sake. Thus, the students were left with valuable lessons that they will carry for a lifetime.

Lohajung:-
At this base camp, women were involved and participated in cleanups and pillow-making sessions.

Despite their labour-intensive routines, that involved looking after animals and managing household chores, these women enthusiastically worked on bottle bricks, and pillow-making.

At the Lohajung marketplace, villagers are happily using the three dustbins that have been placed there and avoiding littering in and around the shops.

Jaubhari:-
Here, the Green Trails team segregated plastic, washing, drying and shredding the waste. This then went into the manufacture of upcycled pillows, which were very popular. The clean-up drive here, like at other places, involved the locals as well.

Using local resources and involving local villages has made the initiative sustainable.

Clean-up drives, awareness programmes and other initiatives, help spread the word of responsible waste management among the local people. Also, upcycling helps, as villagers realise the value of the plastic, how it can be used again to make in-demand products.

Since it began in 2016, the Green Trails initiative has managed to collect around 4,214 kgs of waste, and compost around 20,055 kgs of wet waste, each year. This has been possible, as the trekkers encourage the local communities through which they pass, to build holistic waste-management systems, so their communities can be benefitted. Local village communities have received vital lessons on responsible waste disposal, which they will hopefully preserve!

You may also like:- India’s Lakes Can Breathe Again, Thanks to This Invention Developed by IICT’s Scientists!

So, feeling like going on a trek or a hike soon? The next time you do, participate in a Green Trails programme and work to rid the mountain slopes of the waste it doesn’t need!