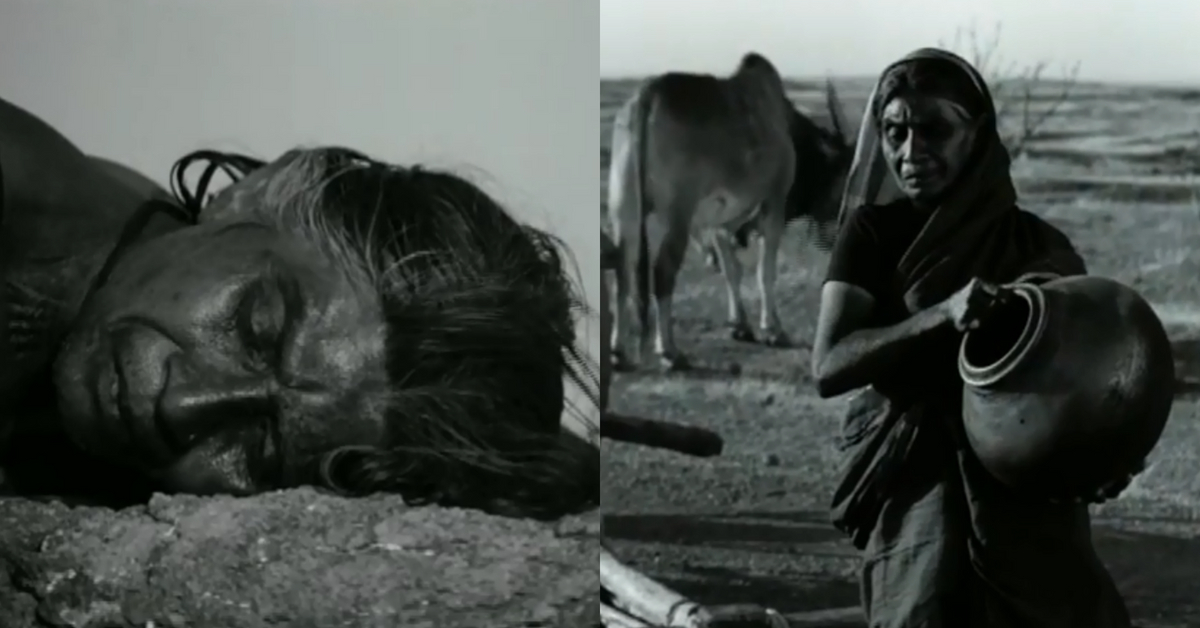 Well-versed in Marathi, 78-year-old ‘Parubai’ as she is fondly called, started earning her living at the film school, sifting through glass, metal, used papers and plastic to be sold as scrap.

If you google the word ‘Kamakshi’, you’ll see that it is a short film, gaining accolades in national and international film festivals.

‘Kamakshi’ by Satindar Singh Bedi, is a black-and-white Marathi film that chronicles the journey of Kamakshi, an 80-year-old water-seller. She digs a well with her horse, Kafka, and oxen, Huuri, in a bid to turn the barren land green. Her expressions, as she digs deeper and deeper, in search of water will leave you spellbound.

The film is set in a dystopian timeless desert land.

But little does anybody know, that this woman who captured the attention of critics and juries at various national and international film festivals is, in fact, a waste picker at the Film and Television Institute of India (FTII) in Pune.

Well-versed in Marathi, 78-year-old ‘Parubai’ as she is fondly called, started earning her living at the film school, sifting through glass, metal, used papers and plastic to be sold as scrap.

Gradually, Parubai started picking up acting roles in student assignments and made her debut into the world of cinema.

The narrative of Kamakshi ties closely with the real-life story of Parubai. Perhaps this is why the waste-picker with no fancy degrees was able to make a mark in the film.

Parubai herself was a young married woman when the 1972 famine struck Maharashtra. She worked as a landless labourer along with her husband in the water-scarce region of Solapur. But when the drought hit, they were left with no work.

Parubai told The Indian Express, “There was no food. Our cows and calves died, we had no time for them as we struggled to feed ourselves.”

She had also lost three of her children to the famine.

And so she decided to leave her home with her family and started working as a labourer at well-construction sites.

They were all taken in a group, loaded in trucks, willing to give the contractor who hired them ‘cheap labour.’ The truck took them to Gujarat, where Parubai and her husband would work day and night. From breaking stones and carrying them over their heads to digging wells and harvesting crops, they did it all! Nights were spent in makeshift shelters or under the open sky with nowhere to go.

“My husband was reluctant to take me along, but I insisted. We went wherever work took us: Gangthadi, Vapi, Navsari. My husband would lift big stones and put them on my head to carry. Bigger stones meant more money,” she says.

One cannot imagine the amount of hard work and persistence that went in for a meagre wage of Rs 10 a day. But it wasn’t long before the couple had to flee. They helped a co-worker whose family fled after taking an advance from the muqaddam. And when he started punishing them, Parubai’s family fled to escape the harassment.

Walking on foot for days, travelling in buses and trains, they eventually reached Pune to start a better life.

What followed instead were a string of menial jobs in the city until Parubai got employed as a waste picker with the Kagad Kach Patra Kashtakari Panchayat in 1982.

Parubai continued to work as a waste picker ever since and was later employed at FTII.

With no training in acting whatsoever, this humble waste-picker has been a part of over 20 student films to date. While she is fluent in Marathi, she negotiates with the students who pay her small remunerations for the acting projects, in broken Hindi.

It’s been four years since cataract affected her vision, thus affecting her job as a waste picker. And so, many times, her sole source of income is the money she gets from students for her acting projects.

In 2009, she was paid Rs 11,000 for a diploma film. She used the money to build a makeshift tin-sheet shanty. While her husband died ten years ago, Parubai also lost one of her surviving sons. The one who lives with her currently is an alcoholic and was abandoned by his wife and children due to his vice.

She recalls how he sold off her copper utensils, the little furniture she had and also the tin roof of her shanty. But now they live in a small home in the Janata Vasahat slum.

“I don’t understand cinema at all,” confesses Parubai to the publication.

She says all she knows is to start acting once the director belts out a loud: ACTION!

Of the 20 films she has worked in, Parubai’s favourite film and character are Kamakshi, though she continues to scrunch her nose distastefully at how terrible she looks in it. “Almost like a witch,” she says.

She says, “That shoot really tired me out. The sequences were really difficult and tricky. I had to climb down the well, sleep in water and even chew stones. All this in one sari. I thought I would contract pneumonia. But you have to suffer. That’s how it is during a film shoot. Potachi khalgi bharnyasathi aamhi kaam karto (I continue to work, to be able to feed myself). There’s no one to support me. Even today, I don’t have electricity in my house.”

Her daily schedule includes walking four kms to the FTII campus from her home on the slope of the Paravati hill.

On the days she has no work on the campus, she still makes it a point to travel in the afternoon and spends her evenings there. She expresses how the students mean so much more to her than her own family.

“It’s here (FTII) I find some solace. I’m alive only because of these kids (students),” she says, signing off.

Parubai has now finished shooting for a commercial film in Pune and Latur. We can’t wait until the film hits the theatres. We hope it succeeds and helps this humble septuagenarian gain the limelight she truly deserves!