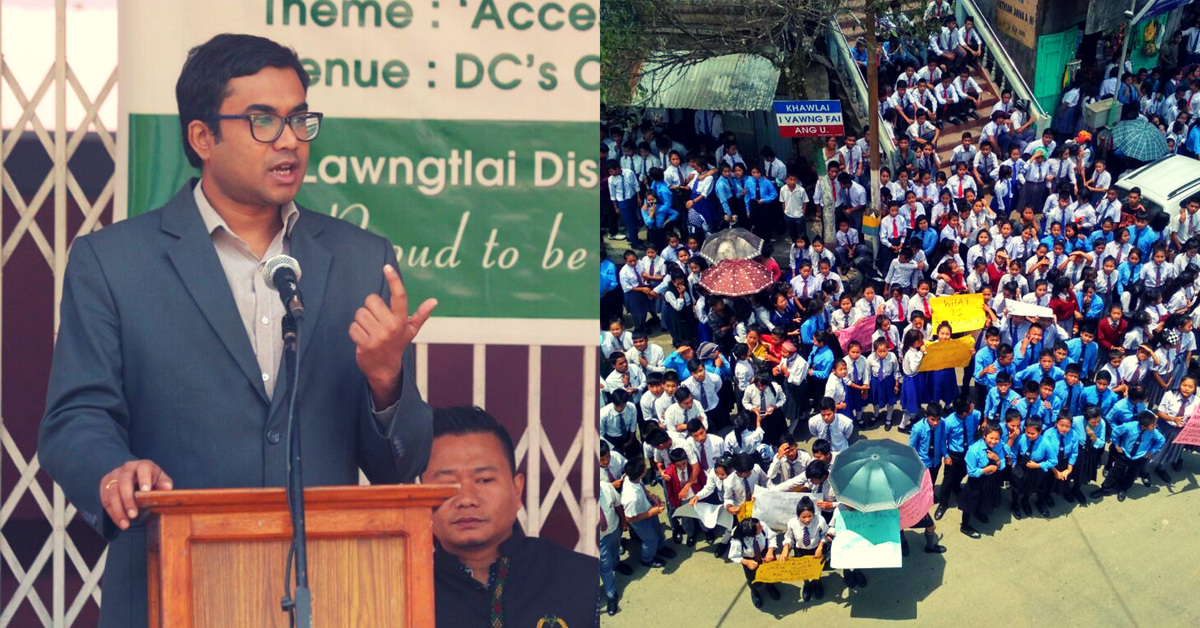 This is the story of how this doctor-turned-IAS officer from Karnataka, came to be loved and respected as the People’s District Collector (DC) in Mizoram.

Dr Arun T grew up in the small town of Arsikere of Hassan district in Karnataka. When a young Arun decided to pursue a career in medicine, he completed his MBBS and specialised in dermatology; his family couldn’t have been prouder.

What nobler profession than serving the ill? Besides, dermatology is a very lucrative profession in India.

But during his post-graduation, one question persistently hounded him. How could he serve the nation? How could he use his services for the betterment of the masses?

It was at this time that the young doctor decided to take a leap of faith and attempt the Union Public Service Commission (UPSC) exams. With sheer hard work and determination, he cleared the examination.

An IAS officer of the 2013 batch of the AGMUT cadre, he was first posted in Mizoram in December 2015.

This is the story of how this doctor-turned-IAS officer from Karnataka, came to be loved and respected as the People’s District Collector (DC) in Mizoram.

From pioneering telemedicine in the remote districts he was posted to bringing back teachers who refused to work in rural schools, the short tenure of this IAS officer in the Northeast is marked with applaudable achievements!

The DC rose to the limelight a few months ago, after an unexpected transfer order from the Chief Minister of Mizoram. According to The North-East Today, the surrounding controversy was that the CM allegedly cited that the people of Mizoram preferred a Mizo DC. This sparked a social media debate where agitated people came to the defence of the popular DC.

Speaking to The Better India, IAS Dr Arun T shares how his work majorly focused in two districts–one being Kolasib, the first district he was posted to as the Sub Divisional Officer, Civil and Lawngtlai District from where he was recently transferred.

The shift from Mysore to Mizoram was certainly a culture shock for the young IAS officer.

“But the people of Mizoram made it feel like home. All I had was an office and four staff members – a driver, a peon, an assistant and a computer operator. They didn’t speak English, and I didn’t understand Mizo. But the good part is that the community took care of me. They would voluntarily help me translate. From NGOs to school teachers, as well as locals, they never made me feel like I was stepping out of my comfort zone.”

When congratulated about the repertoire of work he has done, the humble officer says it was all just a part of his duty.

Here are a few noteworthy initiatives that this incredible IAS officer started in Mizoram.

The district of Lawngtlai is perhaps one of the most remote and backward districts of Mizoram. The region is extremely sensitive since it shares borders with two different countries, i.e. Burma and Bangladesh.

It lies 286 kms away from the capital Aizawl and takes ten hours by road one way. Also, most people do not have the financial backing to travel to Aizawl due to crippling poverty.

So, the challenge with health in the district is its accessibility, availability and affordability.

This, in addition to being a medical person, influenced Dr Arun to work for affordable and accessible healthcare.

It was under Dr Arun’s charge that the first ever telemedicine centre was set up in Lawngtlai. A collaboration between Puducherry’s Jawaharlal Institute of Postgraduate Medical Education and Research (JIPMER) and Lawngtlai’s district hospital, this telemedicine facility aims to provide investigation and speciality consultations online.

With technology as simple as WhatsApp or Skype video conferencing, the medical professionals would be able to discuss the issues the patients are facing, give consultation/advice and even review medical records and test results like ECG or radiological images–all in real time.

And therefore, for a district where affordable healthcare and infrastructure have been a distant dream for the longest time, this telemedicine facility could help save lives.

Lawngtlai also has the lowest literacy rate in Mizoram at 66 percent. And therefore another area of focus for the Deputy Commissioner was education.

It was also during his posting in the district that he also took charge as the caretaker of CADC (Chakma Autonomous District Council) and noticed several discrepancies. The teachers who were posted to the remote villages refused to work there and silently began to work in administrative and clerical positions at the council headquarters.

And therefore, the children who deserved equal access to education were suffering for no fault of theirs. What would you do, if you went to school one morning and realised there was no teacher to teach you?

The DC immediately probed an investigation and issued an order to send over 32 teachers, who were employed after 2005, back to their schools. It was because of his quick action, that many schools were perhaps meeting their first teachers.

Dr Arun also explains the other side of the struggle. He shares how several teachers are reluctant to go to far-flung areas because it restricts them. Out of 189 villages in the district, 30 are inaccessible at any given time. So they either have to walk long distances or take a boat to reach them. Often being posted to schools in these areas meant the teachers would be completely cut off from the rest of the world.

To tackle this issue and keep the teachers posted to remote parts motivated, the IAS officer came up with a rotational transfer policy.

Areas in the district were divided into three categories based on locations like council headquarters, semi-urban areas and rural areas. Every three years, the teachers working in all three locations would be transferred from rural-urban and vice versa.

‘Mipui Aw’ – Voice of the People

As part of social innovations, the IAS officer started a public grievance redressal initiative called ‘Mipui Aw’ during his posting in the Kolasib district. This simply translates to Voice of the People in Mizo and was popular as the day all department heads (e.g. electricity, water supply etc.) in the district would address public grievances. On the first Tuesday of every month. From 10 am onwards, the heads would interact with the general public through one-on-one meetings, letters, etc. and brainstorm solutions for the same.

Inspired by the Hornbill Festival of Nagaland, the DC launched the district’s own Rhododendron Festival with the aim to promote eco-tourism and conserve the rare ‘Rhododendron’ species.

Rhododendron is a flower species found in extremely high altitude areas like the Himalayas and parts of Arunachal Pradesh. But this rare species only grows in the Lawngtlai District at Phawngpui Tlang or Blue Mountain, the highest peak in the state.

The officer notes,“The aim is to conserve the species and also attract tourists who visit the Blue Mountain to the district. From local handicraft to agricultural produce, the festival aims to showcase the district’s tourism, wildlife potential and boost its economy.”

The first Rhododendron festival took place under Dr Arun’s tenure in March and was facilitated by various NGOs and was funded by the NEC (North Eastern Council).

“The Honorable Governor of Mizoram was the chief guest of the festival, and it was a very big moment for us,” says the IAS officer.

When asked about the struggles of constant transfers as a civil servant, Dr Arun says, “As civil servants, it is part and parcel of our job. A transfer is inevitable. And each transfer, regardless of your tenure, has tremendous exposure and scope for learning. But sometimes as IAS officers what seems difficult is how we get very little time to settle in a place, understand the issues, create and implement policies. In the process, we start many initiatives but don’t get to see the fruits of our hard work once transferred.”

Dr Arun was in Lawngtlai for only six months until he was transferred to Kolasib again.

Delving into the strong support the people of Lawngtlai showed when his transfer orders arrived, he says:

“When the transfer happened, the locals got emotional, some were agitated and began protesting against it. It was indeed very emotional for me to see the love and support they showed me. We leave our hometowns and travel to far-flung districts as part of our bureaucratic work. And for us, it is this unconditional love, respect, and support we get from the people we work with and for, that keeps us motivated.”

The IAS officer has moved from not knowing a single word of Mizo to belting out speeches in the language, albeit with mistakes.

In his final message, he breaks a decade-long uninformed stereotype about the state, saying, “There is a misconception in the minds of the general public that Mizoram is a violent place. But to be honest, having lived and worked there, I would say, there is no place as safe, peaceful, welcoming and beautiful as Mizoram.”

If his story inspired you, get in touch with him at arunt.doc@gmail.com.