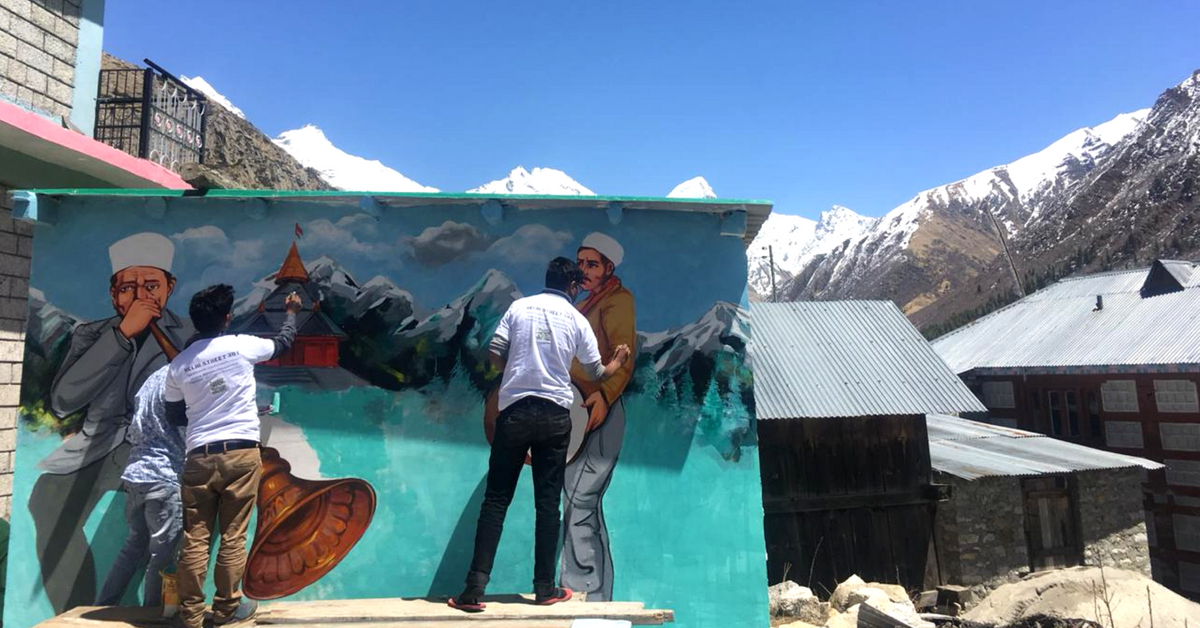 What a beautiful view behind the canvas!

“Most people just take stuff from there. So it took the villagers two days to realise we were there to leave something behind.”

The last inhabited village near the Indo-Chinese border in Himachal Pradesh, is the quaint Chitkul, at an altitude of 3,450 metres. With years of tourism and new people visiting the village for treks and sight-seeing, the native villagers have become increasingly shy. Although the Pahadi people are very generous and friendly once you get to know them, regular tourism has somewhat repressed these virtues within them. And rightly so.

So when the team of “Delhi Street Art (DSA)” went to Chitkul with the aim of doing something for the village, the villagers could not believe it. Yogesh Saini, Founder, DSA told The Better India, “Most people just take stuff from there. So it took the villagers two days to realise we were there to leave something behind.”

But how did the Delhi artists arrive in Chitkul, and what were they planning to do?

Yogesh answers, “We were contacted by the Wanderer’s Nest Hostel, near Chitkul, to paint their walls. They had read about our previous project in Delhi. While we were there, we thought why not visit the Chitkul village and see how we can help beautify the walls and structures there!”

You may also like: This 4-Year-Old Pune Art Wizard’s Work Sells For Thousands of Dollars!

Without charging a single penny for their artwork, the team of 14 artists started drawing the culture and lifestyle of the villagers. Although reluctant to consent for photographs at first, the villagers saw that DSA was genuinely there to beautify their walls. And soon enough, requests to click and paint remarkably started pouring in.

Would you like to see what the artists painted and how they immortalised the Chitkul culture and lifestyle? Here are some pictures.