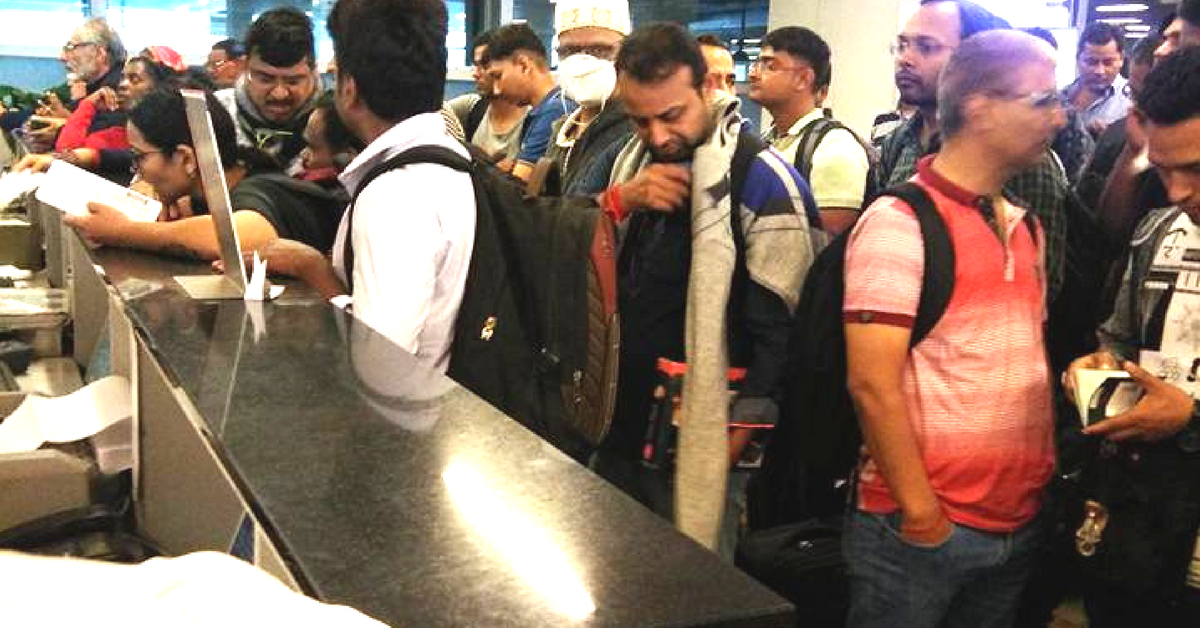 Long waiting lines at airports may be a thing of the past, thanks to the new paperless boarding initiative. Representative image only. Image Credit: Rakesh Manchanda.

Using the AirSewa-II portal, passengers can register to use the service, and experience a smooth paperless process while boarding.

In October 2017, India recorded its highest ever number of domestic flyers—around 1.04 crore people travelled by air within the country that month. According to a Times of India report, the only time the number of flyers had crossed the 1 crore mark, was in May 2017.

How many times have you reached the airport, only to find a long queue of passengers clutching tickets, waiting anxiously in a long line, to enter the terminal? Well, the number of flyers is ever-increasing, thanks to lowered air-fares and the expansion of domestic airline routes. Which is why it becomes crucial that the process of flying gets smoother.

Well, according to this report in the Financial Express, this is all set to happen.

Domestic air passengers could have a completely paperless boarding process at airports, as the government is all set to introduce a biometric-based ‘digi-yatra’ initiative that will provide passengers with a unique ID. To use this facility passengers can enrol with the programme via the government’s AirSewa-II portal, and generate a ‘digi-yatra-ID’.

Officials are enthusiastic about this step, and according to Jayant Sinha, the Minister of State for Civil Aviation, the method will increase convenience and the throughput of India’s airports. Speaking to FE, he said that the Aadhar infrastructure would be used to authenticate a passenger, and a database and identification procedure will allow the passenger to get into the airport without any paper.

The minister adds that the Aadhar-based verification will be done just once. The initiative is voluntary, and passenger’s privacy is being built into the digital yatra system.

According to RN Choubey, the Civil Aviation Secretary, passengers can enter the terminal through an ‘e-gate’ after a face-based identification. The system will be beneficial for passengers, the airlines and the security system, as it will ensure shorter queues, quicker boarding, efficient self-baggage drop, and self check-in.

This paperless system, via AirSewa-II will ensure that you don’t even need to go to the airline counter. Also, the omission of paper means the reduction of cost and will hopefully bring fares down.

The airports in the cities of Bengaluru, Hyderabad, Kolkata, Varanasi and Vijayawada, will be beginning paperless boarding phase-by-phase, starting January 2019. Well, one can look forward to a new year full of smoother airport experiences using AirSewa-II.