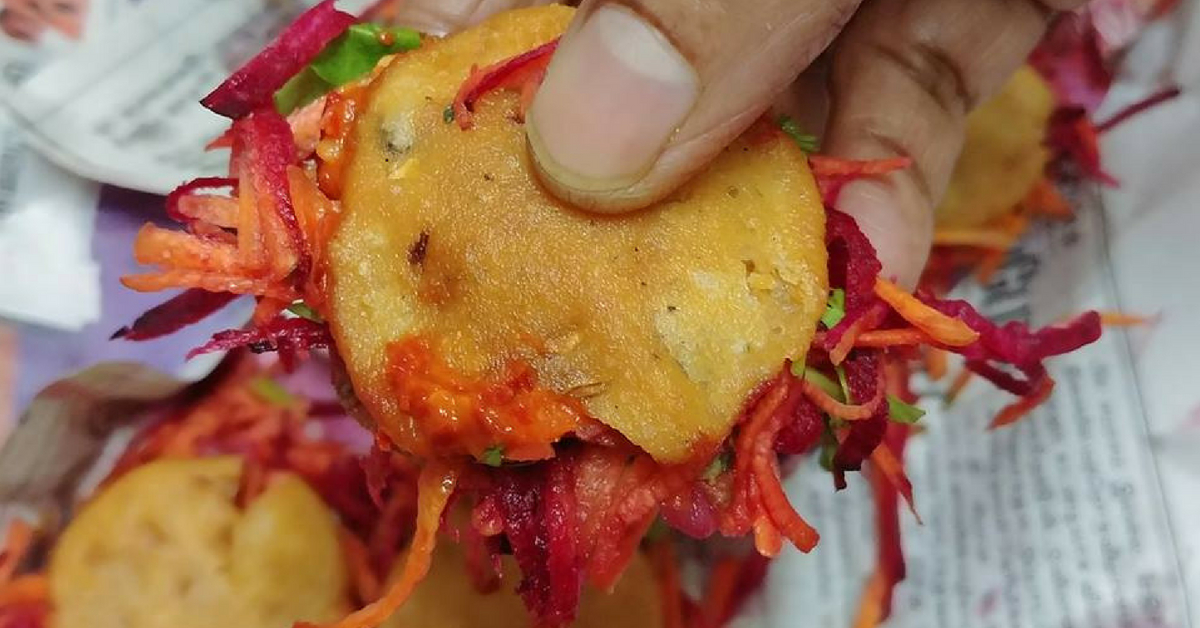 Those who have tasted it have probably found it to be very similar to a typical ‘chaat papdi,’ with one notable exception—the thattaivadai settu is healthier!

Those who think that chaat, the savoury street snack, is a culinary speciality found only in the northern parts of the country, have obviously never tasted the ‘thattaivadai settu’ found in the streets of ‘Mango city’ Salem in Tamil Nadu.

Those who have tasted it have probably found it to be very similar to a typical ‘chaat papdi,’ with one notable exception—the thattaivadai settu is healthier!

While the disc-shaped ‘thattai’ is a classic tea-time snack made of gram flour and is a staple in every Tamil household, this particular street-side version involves shredded beetroot, carrot, onion and masala mix, sandwiched between two of these discs.

Additionally, the delicious filling is smeared with tomato chutney that has a garlicky zing!

Interestingly, the snack, which has become inextricably synonymous with Salem’s identity today, is believed to have originated in Yercaud and was the brainwave of Balakrishnan, a merchant from the hilly town.

What initially was an attempt to give a slight twist to the unassuming thattai, by adding tomato chutney and seasonal vegetables, would go on to scale distances to reach Salem and forever become one of its iconic snacks.

Today, there are many different renditions of a thattaivadai settu, and an adventurous spirit to experiment with new ingredients is all that is needed. For example, if one adds mango shavings to the veggie mix, the dish becomes maanga settu, while a dash of shredded coconut makes the street snack thenga settu! One can even find garlic settu, which will leave a strong, piquant flavour in your mouth along with happy memories.

Another fascinating facet of this street delicacy is that no two thattaivadai settu(s) from stalls across the city taste alike.

Every vendor has his or her unique recipe, which draws hundreds of foodies to each one of these stalls.

A lot of its popularity has to do with the ‘secret’ chutneys that these settu sellers have perfected. From an ambrosial mango-ginger mix to tangy garlic twists, the flavours out there are aplenty, and you need to visit one of these stalls at Salem to experience this mouth-watering street food for yourself.

You may also like: Unravelling the Fascinating History of the Samosa, India’s Favourite Street Snack

Salem’s citizens are now vehemently demanding that the thattaivadai settu be given the GI (Geographical Indication) tag. We, at The Better India, absolutely understand this request as a member of the team quite literally made our mouths water after describing this street food to us in detail.

So those heading to Salem, forget the mangoes, and give the thattaivadai settu a chance to win over your taste buds!