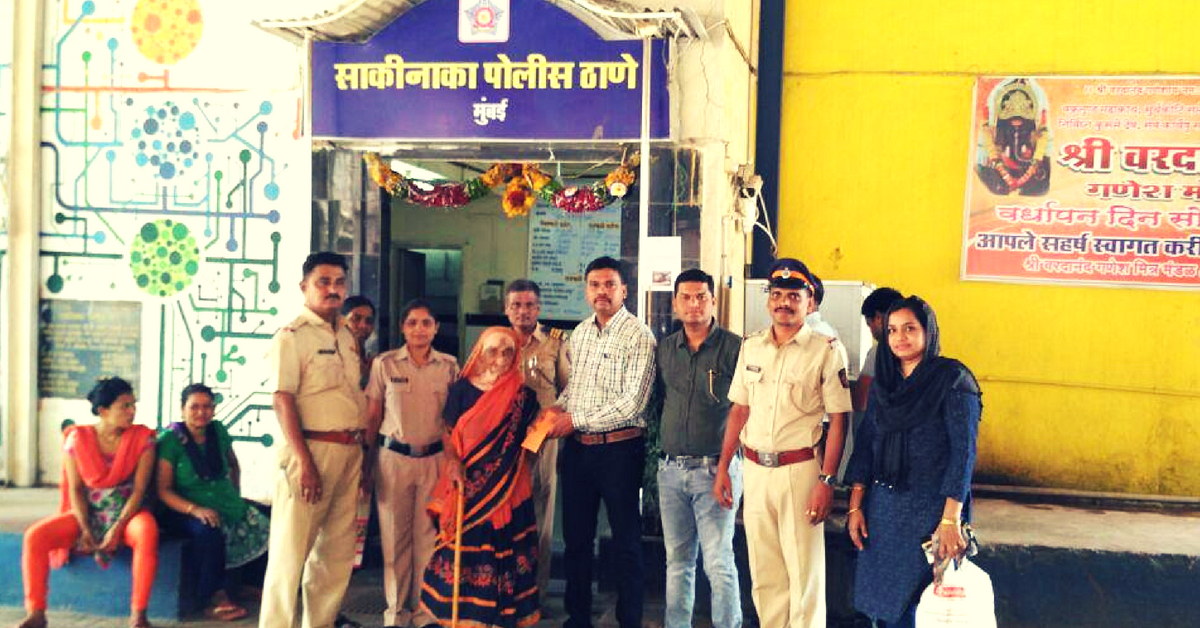 Lata Pardeshi with the cops who helped her. Source: Twitter

Lata, who had worked at Sakinaka’s Chachad Hospital for over twenty years as a maid, was left jobless and homeless after the ‘hospital’ which was her workplace and home, was demolished last month.

When homeless 65-year-old Lata Pardeshi walked into the Sakinaka police station in Mumbai, she didn’t know two things. Firstly, that she would find a permanent home and secondly, that she would return having formed a lifelong bond with the benevolent officers.

Lata, who had worked at Sakinaka’s Chachad Hospital for over twenty years as a maid, was left jobless and homeless after the ‘hospital’ which was her workplace and home, was demolished last month.

Widowed for 30 years, the senior citizen did not want to burden her widowed daughter-in-law in Pune to care for her.

Even her relatives weren’t on talking terms with her. With nowhere to go, supported by her walking stick, this old lady entered the Sakinaka Police station on Tuesday, 15th May 2018.

Speaking to The Times of India, Lata said, “The cops, especially Bhalerao, treated me with a lot of love and care and even gave me Rs 500 for food and promised to find me a shelter. It was very difficult for me to leave the police station after spending just two days there as the cops treated me like their mother. Bhalerao listened to my problems and immediately offered to help me.”

As reported by the publication, contributions from several cops helped raise Rs 23,000 for Lata’s accommodation. The cops now plan to open a bank account in her name to help more people contribute.

The kind cop was able to find Lata accommodation at the Karjat Old Age Home. The uniformed men not only organised a farewell to bid Pardeshi goodbye but also gave her food and money.

PSI Bhalerao, who was lauded for going beyond the call of duty, joined the police force after completing his MBA from Pune and cracking the MPSC exam three years ago.

Originally hailing from Nashik, Nilesh has promised to meet Lata at least once a month. Their separation was an emotional one, as Lata told him, “You are like my son.”

He recalled the struggles of finding shelter for Lata and told the publication, “During my hunt to get an accommodation for Pardeshi; I called several local politicians who told me they would get back to me. Later, though, they either switched off their phones or cut my calls. NGOs asked for a donation and said they could not accommodate her at present.”

Mumbai Police lauded PSI Nilesh Bhalerao and the rest of the staff for their selfless work.

We salute the cops and hope that Lata is taken good care of at her new home.