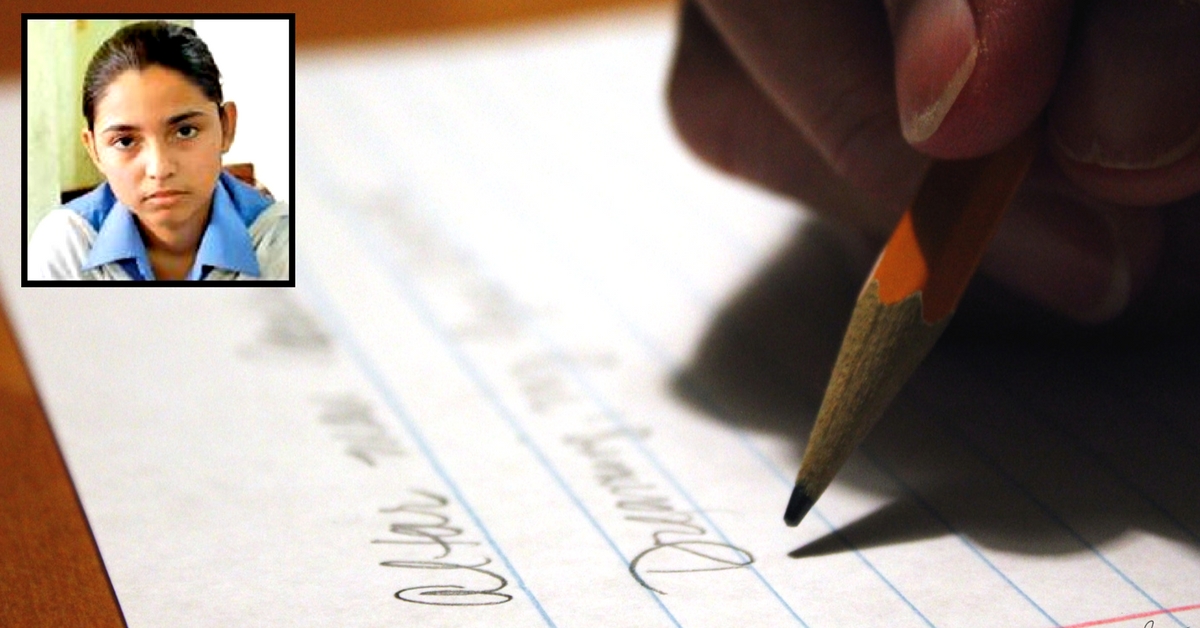 The anxiety and stress were bogging her down. As the exams grew close, her hopes of attempting them were dwindling. She was even considering dropping out.

17-year-old Umara could have topped her school in her Class 12 UP boards. But as June neared, the student from Saraswati Girls Vidya Mandir Inter College, suddenly started facing a problem. She couldn’t even grip the pen, let alone write a sentence.

But to the surprise of all her naysayers, this UP student not only cleared her exams successfully but also scored a distinction with 86.6%.

It is important to make known that this road to success was anything but easy.

In the initial months, when Umara was distraught that she was unable to write a single word at school or home, her parents ran pillar to post to find a cure. They consulted over four different doctors in Bareilly, yet none of them could diagnose Umara’s disorder.

Speaking to The Times of India, the Class 12 girl who never missed a class despite the condition says, “Whenever I would try to hold the pen, my fingers failed to grip it. I had to exert pressure to write a single word. The doctors in Bareilly gave me medicines, but it did not help me, as the problem was not diagnosed. I would cry all the time because I could not make notes in the classroom. My teachers who were aware of my health problems provided me (with) photocopied notes from my classmates. I would memorise the chapters but faced immense problems in physics and chemistry which had numerical problems, as I could not solve them.”

The anxiety and stress were bogging her down. As the exams grew close, her hopes of attempting them were dwindling. She was even considering dropping out.

“I told my family that I did not want to appear for exams. Just 20 days before the class XII exams were due to start, my elder brother, Mohd Zubair Ali, took me to AIIMS in Delhi where doctors told me that I have been suffering from writer’s cramp,” added Umara.

Umara hadn’t written for almost a year. But the treatment helped her improve a great deal though it affected her speed and efficiency.

“My speed was affected because I did not hold a pen for almost a year. I could not complete my papers on time and left two to three questions in all the papers. However, when I saw my results, I could not believe that I had scored so well, despite writer’s cramp,” a delighted Umara told TOI.

Lauding the young girl’s indomitable spirit, her school principal said, “Umara is a brilliant child and had topped the school in class X and XI. She would have been our school topper again this year if her speed was not affected by her disorder.”

While we are certainly proud that Umara was able to battle her disorder and come out with flying colours, it is important to shed light on what writer’s cramp is all about.

Writer’s cramp refers to focal dystonia (a neurological disorder) of the fingers, hand, and/or forearm. To put it simply, this disorder causes your brain to send incorrect information to the muscles, causing excessive involuntary muscle contractions, and so your hands twist into odd postures. It causes grave difficulty in simple tasks that require fine motor movements like writing or playing a musical instrument.

People suffering from simple writer’s cramp have difficulty with only one specific task. For example, if writing activates the dystonia, as soon as you pick a pen or try writing a few words, the dystonic postures of your hand will start affecting the speed and accuracy of writing. Like in Umara’s case.

In dystonic writer’s cramp, people not only face difficulty doing one task (like writing) but will also be affected while performing other activities like shaving, eating, using utensils or applying makeup.

Anyone can get a task-specific dystonia like writer’s cramp.

While the actual cause is unknown, simple writer’s cramp is usually attributed to overuse, poor writing posture, or improper holding of the writing implement. And while stress doesn’t cause writer’s cramp, it can play a role in worsening the symptoms. Say, for example, if you keep taking tests, or worry about the cramps, it can become worse.

As per Healthline, while there is no one particular approach or cure to writer’s cramp, the affected individual may need to undergo a variety of therapies, singularly or in combination. Some of these options include:

Physical and occupational therapy where you may learn how to hold your pen differently, using thicker pens or grips, using specially-made splints, and changing the position of your paper or arm.

Medical options include botox injections into select muscles which helps ease writer’s cramp, especially when the wrist or fingers move into unusual postures. Oral medication like anticholinergic drugs, such as trihexyphenidyl (Artane) and benztropine (Cogentin), is also considered to help some people improve.

Another viable option may include relaxation and distraction techniques like deep breathing and visualisation or attempting to write with both hands at the same time.

Many people also prefer undergoing sensory re-education. This is the process of identifying textures and temperatures with your fingers. A rehabilitation therapy that uses splints on your unaffected fingers to help retrain the affected fingers, it helps retrain brain patterns that cause writer’s cramp or sensory motor retuning.

So next time you hear someone complaining of writer’s cramp, don’t brush it aside. Look it up and reach out for the right treatment.