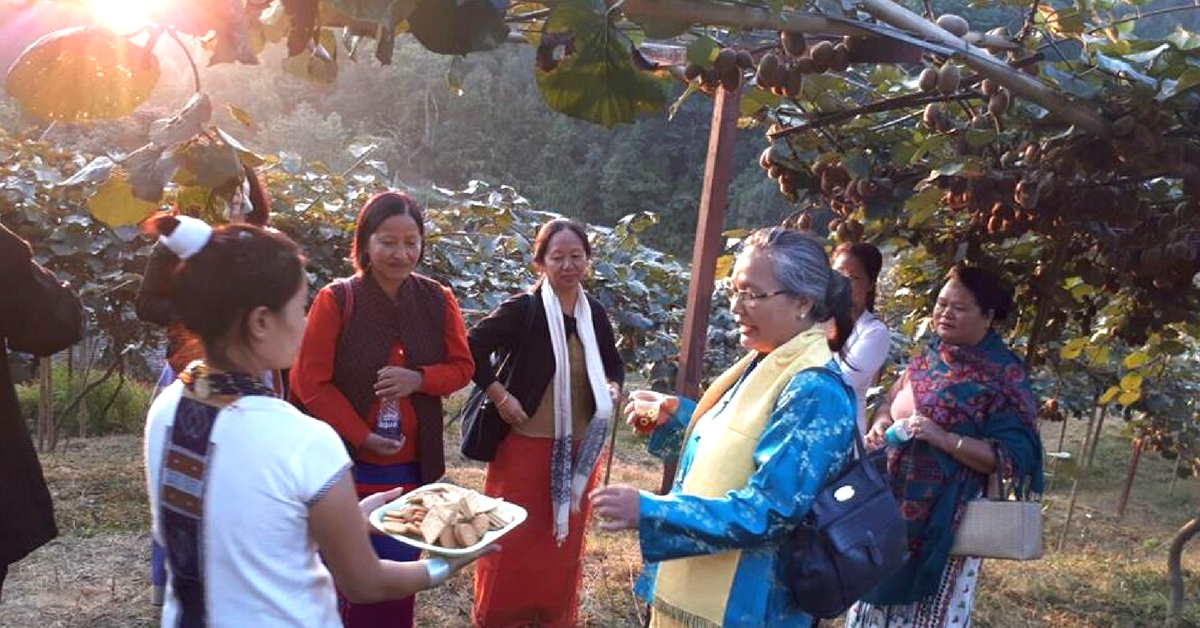 Ziro valley in Arunachal Pradesh grows kiwis but sees no demand in the market. Takhe Tamo thought of an idea that would change the fate of kiwi farmers.

Kiwis have always been considered an exotic fruit. Imported to India from New Zealand, Italy and Chile, Kiwi was never thought of being an indigenous fruit. This was mostly because most of us are unaware that the hills and valleys of Arunachal Pradesh too, grow this sour fruit.

Indians have started consuming Kiwis only since the last 20 years. Even so, Arunachal Pradesh remained mostly behind the curtains since urban Indians preferred the New Zealand brand of Zespri.

Tage Rita Takhe, an agricultural engineer from Ziro valley in Arunachal Pradesh, was bewildered that a large amount of Kiwis are imported to India. Her valley grows kiwis too but sees no demand in the market. “6000 metric tonnes of kiwi is still imported into India every year,” she told Indian Express, adding, “Why do we need to import when it is practically growing in our backyard?”

Rita’s husband, Takhe Tamo thought of an idea that would change the fate of kiwi farmers.

Competing for the raw fruit with international brands did not seem to work with the Indians. So together, Rita and Tatung decided to ferment the fruit and make wine from it!

Speaking to The Telegraph, Rita said, “Kiwi farmers are unable to explore its full potential as a raw fruit in terms of market and price. Making wine was the best option to preserve its nutritional value. Drinking wine is a tradition in tribal culture but preserving the drink for a long duration was not possible because of lack of modern wine-brewing methods. Our kiwi wine is a solution to this gap between tradition and technology.”

Tage Tatung, an Agro-Horticulturist from Ziro joined this unconventional venture with the Takhes. Tatung has been an active advocate of social services and farmer upliftment. He has also been awarded the State-Level Governor Award for his work in Agro and Pisciculture.

Working to empower kiwi farmers in their state, Rita and Tatung have successfully brought 20 hectares of area under cultivation in Ziro Valley.

Their fruits are completely organic and do not use any chemicals for cultivation. “The unit does not generate any pollution,” claim the founders of Naara-Aaba wines, adding that, “Provision will be kept for suitable pollution control measures as prescribed by norms and applicable to these type of industries… The pollution control measures such as adoption of good manufacturing practices for a cleaner production system and planned social forestry around the unit are observed.”

The 2300 sqft winery in Hong, Ziro currently employs 25 people. Their machinery to make wine from kiwis, preserve and store it, comes from Nashik, Italy, China and Denmark.

The name of the brand is a tribute to Rita’s late father-in-law who relished the local wines. He was lovingly known as Naara-Aaba.

Rita and Tatung’s unconventional approach to reviving kiwi production has brought prosperity to their valley as farmers who had given up on their fruit farms due to low demand have gone back to growing kiwis.

You may also like: A Small Tribe In Arunachal Pradesh Is Showing How Man And Nature Can Co-exist In Perfect Harmony

Rita told the publication, “It was the most logical thing to do–the fruit does extremely well in this climate. The abundant sunshine of Ziro contributes to optimum growth and taste of the fruit.”

The valleys in Ziro now flourish with kiwis that people actually demand! By thinking differently, Rita and Tatung corked the demand for their farmers’ crop.