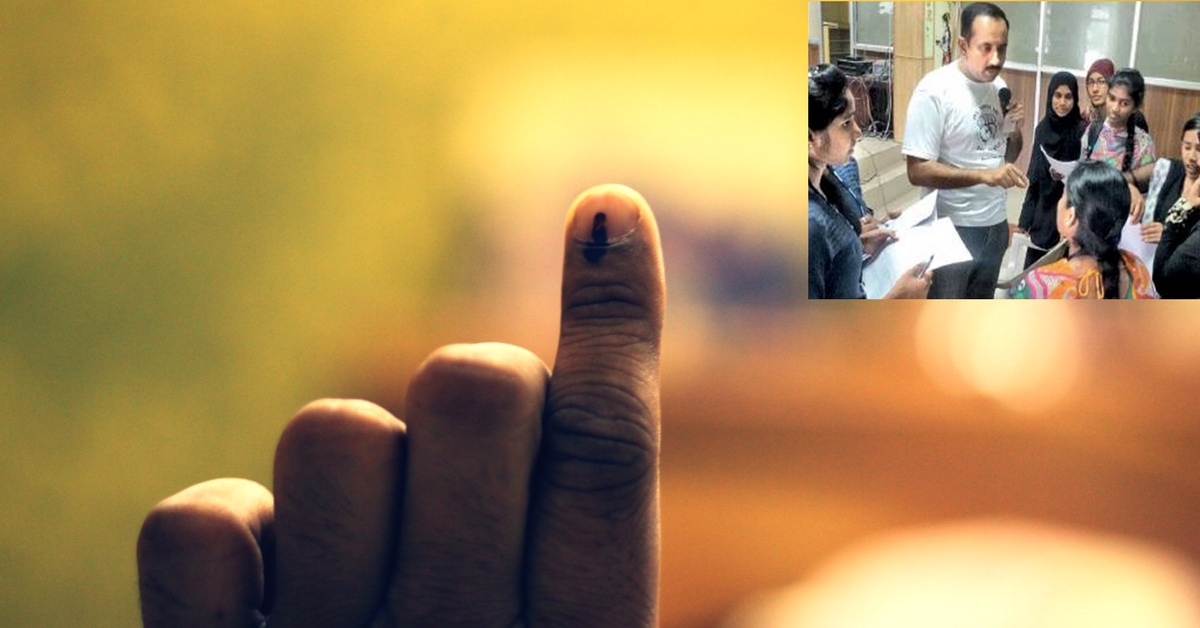 Ananda Thirtha is a software professional who has donned the role of an agent of democracy of his own accord.

For most of us, when we turned 18, one of the topmost things on our “to do” list was to acquire a driving license!

However, one thing that is way more important and crucial to our democratic system of governance is that a person registers as a voter as soon as he or she comes of age.

Maybe you and I would probably have taken this step right after we turned 18, but sadly, a large population of youngsters fail to do this for the sheer lack of awareness on the importance of voting amongst them.

Although eager to vote and participate in the electoral system, many times, what prevents students from registering themselves, is their inability to fill the registration forms properly or submit these on time.

A significant facet of any democracy, what we really require is that colleges and universities come forward and educate students about the entire electoral process as well as help franchise their right to vote, as these institutions have a great role in shaping a student’s life.

Interestingly, there is one good Samaritan in Bengaluru, who has taken it upon himself to educate the college-going population in the city about the voter enrolment process and has helped register 30,000 youngsters as voters since 2010.

Ananda Thirtha is a software professional who has donned the role of an agent of democracy of his own accord. Going around degree colleges across the city, the man helps to not only raise awareness on the importance of voting amidst students but also goes the extra mile of assisting them in filling up application forms, attaching the right documents and handing over the applications in bulk to the respective BBMP Zonal offices.

“I was inspired by a talk by Infosys co-founder NR Narayana Murthy in December 2009 where he had highlighted the importance of voting, to elect the right people. A few months later, I began with APS College in south Bengaluru, where I spoke to degree students about the need to register as voters. Though many of them filled the registration forms, not all submitted these as they couldn’t locate the BBMP office. Then I spoke to BBMP and began collecting filled forms and handing them over in bulk to the civic body,” said Ananda to The Times of India.

Such is the involvement and dedication of the 38-year-old that he even left his job as a project manager at an IT services company four years ago, so that he could devote more of his time for the social initiative. This year alone, Ananda has been instrumental in helping 10,000 youngsters make it to the voters’ list.

One such student is Pranati K, who studies in a private college in Jayanagar and went right ahead to enrol as a voter after attending one of the awareness camps conducted by Ananda. “He told us that the voter registration is a hall ticket for democracy and it was inspiring,” she said.

According to Ananda, who has been associated with citizen groups and forums like B.PAC, over 1.2 lakh students get into about 500 colleges in Bengaluru every year, yet only about 11,000 get legally registered as voters.

“What I see is a lack of awareness among these youngsters about registering themselves for voting, though many of them are eager to vote. Also, many students submit forms with incomplete data or wrong supporting documents, because of which their applications get rejected. For many students, the voting day is nothing but a holiday. My effort is to fill these gaps and help them register as voters,” he added.

Assisted by friends, Ananda has also put together awareness videos, apps and web portals that aim to help yet-to-be registered voters with features like locating wards and assembly constituencies. He also assists the Election commission in conducting EVM presentations and also works with apartment associations and software companies in respectively getting their residents and employees enrol as voters.