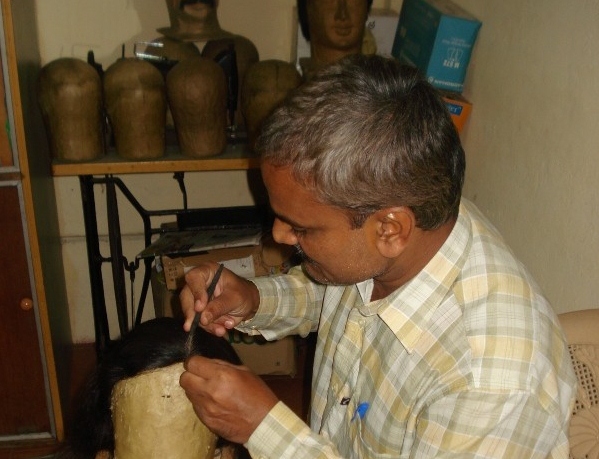 The first question many cancer patients ask is about hair loss which deeply affects them. Kumar, a wig maker based in Bangalore, is putting his wig making skills to a better use by making natural looking wigs for cancer patients across the country. Read along to know more about his work and how he does it.

It is a small shop, on a narrow lane, near Kurubarahalli, Bangalore. A board outside reads “Natural Wig Works: Specialists in natural ladies’ and gents’ wigs”. As I entered, I was drawn to a chart on which different kinds of moustaches were stuck, for use in theatre and films. On a wooden table were moulds fixed with a variety of wigs.

My cousin and I had come in search of Kumar, after she lost her hair due to chemotherapy. Sushma had had thick long tresses. Every morning, my aunt used to struggle to plait her hair in time for school.

“I was shocked when I was diagnosed with cancer. Added to this was the thought of losing my hair due to chemotherapy. Though a social construct, long hair has always been associated with a sense of beauty,” said Sushma. “Then I got to know about Kumar, the wigmaker.” Kumar, who was weaving a wig, stopped his work to measure the circumference of Sushma’s skull and promised to deliver her wig in a few days.

Wig-making is not Kumar’s family occupation. A native of Belakawadi, a village in Mandya district, Karnataka, he comes from a family of farmers and oil pressers. Unable to watch Kumar struggle in the fields, his maternal uncle took him to Shivaji, a hair dresser, in Bangalore. Shivaji asked Kumar if he would come to Madras (now, Chennai) and learn to make wigs. Kumar eventually made it his living.

“I worked under Shivaji for eight years. He made wigs for film actors and theatre artists. I picked up the nuances of wig making and returned to Bangalore. Now, for six years I have been weaving wigs at my shop,” says Kumar.

His uncle Kunna Shetty helps him. “Patients are referred to us by doctors. We measure his/her skull and take a recent photograph to get an idea of the hair style,” says Setty.

Kumar makes a mould of the patient’s head and begins work. In three days, the wig is ready. Wigs are priced from Rs. 8,000 onwards. The rates are fixed based on length and quality of hair. “We courier the wigs to those patients who live in other cities or states. The wigs are natural and doctor-certified,” says Kumar.

Sushma agrees that the cost is high but “the better the quality, the more natural the wig looks”. “It is people’s insensitivity that makes cancer and hair loss dreadful to patients,” said Kunna Shetty, a statement Sushma agrees with.

“During counselling, the first question many patients ask is about hair loss. We realised then how deeply hair loss affects them. To fix this, we compiled a wigmakers’ directory,” he said. “Kumar’s role, as a wigmaker, shows how everyone can contribute to cancer patients’ care.”

Is making wigs an art? “Of course,” says Kumar. “Weaving wigs requires dexterity and an unwavering focus. The ability to visualise and craft wigs to fit clients’ need is an art. But it has its problems. Demand fluctuates. Since weaving a wig involves long hours, both one’s eyesight and spine are affected.” He also rues stiff competition from synthetic wigs made in Kerala.

Then why does he carry on? “The thought that my work cheers cancer patients keeps me going.”

This article was originally published in The Hindu here.

About the author: The labour and beauty of writing continues to fascinate R S Ranjeetha Urs in all its forms. She believes in the power of ideation irrespective of its outcome. To witness and know the daily struggles of people to live and make sense of their lives against great odds is one of her life-long fascinations.
Promotion