To Sehmat and the likes of hers, we pay deep respect to these unsung and unheard heroes of our country!

( I completely defeat those who dare to fight with me)

That was the motto of INS Vikrant  “courageous”, a Majestic-class aircraft carrier of the Indian Navy. However, we would have lost control over the sea and the courageos Vikrant, if a brave Indian woman hadn’t dedicated her life to the country.
This woman too might have been lost, like many other names that have not found a place among the patriots of our country. But thanks to Harinder S. Sikka,  a former Lieutenant Commander of the Indian Navy, who brought out her story through his novel, ‘Calling Sehmat’ – published in 2008.

And now, the novel has been made into a movie, ‘Raazi’, directed by Meghna Gulzar.

According to Sikka, it was his anger against the many intelligence failures of the Indian Army during the Kargil war that gave him this fascinating story.
In 1999, Sikka had gone to cover the Kargil war and research about various intelligence failures he had heard about. However, during his stint there, an Army officer pointed out that there had been people who were risking everything to provide the army with top secret information.This army officer was actually talking about his mother!

“I was very angry then and even questioned the patriotism of certain people in the Intelligence Department. There, during one such discussion, an Army officer told me that not everyone is the same. I was not too convinced about it. So he gave the example of his mother, much to my surprise. She married a Pakistani Army officer to provide India with classified information during the 1971 war. She was a Kashmiri Muslim,”  said Sikka to the Hindu.

Sikka, who is now the Group Director, Strategic Business at Piramal Enterprises, then met the woman at her house in Maler Kotla, in Punjab. 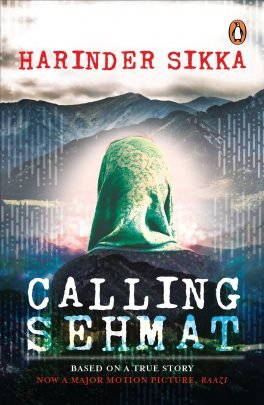 To maintain her secrecy and for the sake of her family’s safety, Sikka called her Sehmat Khan in his novel and never revealed her real name.

During his conversation with this feisty lady, the author came to know that she was the daughter of a rich businessman in Kashmir and according to the plan of Indian intelligence, was married to a Pakistani army officer to provide India with classified information during the 1971 war.

The most important information provided by Sehmat was Pakistan’s plan to sink INS Vikrant, which helped in saving this pride of India! Sehmat also revealed that she had tutored General Yahya Khan’s grandchildren during her stay in Pakistan.

After effectively finishing her duties as an undercover Indian agent in Pakistan, it was time for Sehmat to get back to India. The lady did come back alone but with another patriot in her womb. Sehmat was pregnant when she left Pakistan. Her son went on to become a responsible Indian army officer who narrated this story to Sikka.

The author says it took him eight years to fictionalize her story and knit everything into a cohesive narrative.

The book opens with Sehmat’s death, long after she has successfully carried out her mission. When her son Samar enters the room where her body is laid, Sehmat is shielded by the shadow of an Indian flag outside the window, “protecting her from the bright rays of the sun.”

To Sehmat and the likes of hers, we pay deep respect to these unsung and unheard heroes of our country!