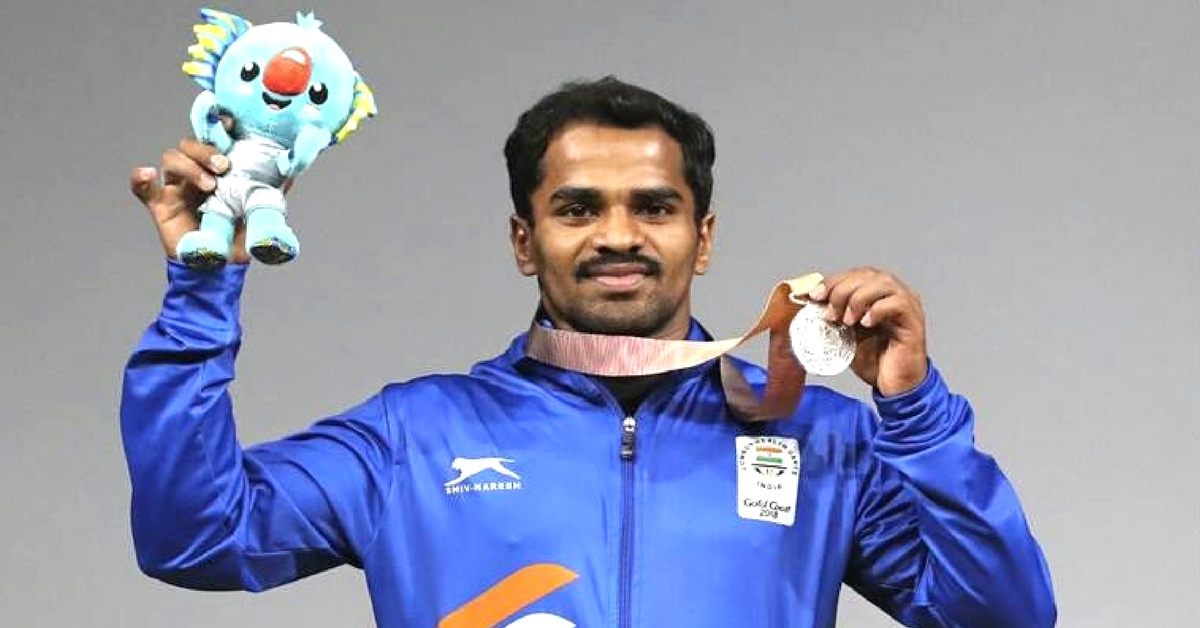 “As such, we had barely enough to sustain ourselves, but the accident meant that my father was not only out of work but also in huge debt.”

On the first day of the 2018 Commonwealth Games, when India was fast asleep, Gururaja Poojary rose to victory. The 25-year-old weightlifter from Chitturu, Karnataka, entered the 56 kg category, and successfully clinched the silver medal. This medal opened the gates for India’s wins in the Gold Coast 2018 Commonwealth Games.

Gururaja lifted a total of 249 kg, which is also his personal best. He lifted 111 kg in the snatch and 138 kg in the clean-and-jerk events.

In his first attempt in the clean-and-jerk event, Gururaja failed to lift. His second attempt, however, was nullified by the judges. “I was a bit tense as I had seen my second lift and could not make out why they had termed it invalid. But my coaches got me settled. Vijay Sharma sir (the coach) told me that this was my last chance and that the entire country was looking at me for a medal,” the silver medalist told Hindustan Times.

Determined and hopeful of making his mark in this event, Gururaja succeeded in his third and final attempt in lifting 138 kgs! And so, we have a silver medal in our bag!

As we applaud the success of Gururaja in these Commonwealth Games, his determination to overcome financial circumstances cannot be overlooked.

Gururaja comes from a very humble background. His father was a pick-up truck driver who owned just one truck. Family income was meagre, but the members of the family supported Gururaja’s aspiration to become a weight-lifter with all that they could gather.

One fateful day, the family of 10 was celebrating the wedding ceremony of Gururaja’s sister. The assistant of Gururaja’s father decided to take out their only truck to make a quick buck. He was driving on a highway near their village where he met with a fatal accident. The assistant did not survive it, and nor did the truck.

The only source of income for Gururaja’s family was gone.

“As such, we had barely enough to sustain ourselves, but the accident meant that my father was not only out of work but also in huge debt.

The vehicle belonged to a landlord there. Add to that, the expenses for the wedding. We were in deep financial trouble and emotional turmoil,” Gururaj told the Indian Express.

Even then, his father encouraged Gururaja’s dream of being a professional weightlifter. Gururaja was determined to help his father in sustaining the family financially. “Previously, even though he didn’t like me pursuing sports, he would somehow manage to fund me, even if he had to borrow from others. Now, no one would lend him money, and my dreams were being pushed to the back-burner. Coaching was free, but how would I pay for the supplements, the clothes and the shoes?” recalled the weightlifter.

He thought of taking up a government job. The lack of returns from his weightlifting career added to the financial burdens of the family.

At this point, when all seemed to fail, Gururaja met two powerlifters. Inspired by them, he pursued powerlifting with such zeal that he won several competitions.

His coaches Rajendra Prasad and Vijay Sharma encouraged him to get back to weightlifting.

Gururaja recalls how Rajendra Prasad helped him get on his feet and lift again. “He told me that a champion is not always self-made, but made by the society, and even if he had to sell his property, he would support me. He called everybody in the gym, narrated my story and requested them to contribute money for me,” he says.

The gym members got together, funding Gururaja for his equipment, and his father to earn his livelihood. And needless to say, Gururaja stood up to their faith in him.

You may also like: #ChasingTheGold: Meet Saikhom Mirabai Chanu, India’s Hope for a Gold in Women’s Weightlifting

After securing the second position in the 56 kg weightlifting event, he spoke about it to Hindustan Times. “I am happy to win India’s first medal here, but I am not satisfied with my overall performance here. The blessings of my parents and the efforts of my coaches Rajendra Prasad and Vijay Sharma and the help of the federation (Indian Weightlifting Federation) helped me win this medal,” he said.

The kind of determination shown by Gururaja is an inspiration for us. He has fought all odds to emerge victorious and make an entire nation proud.