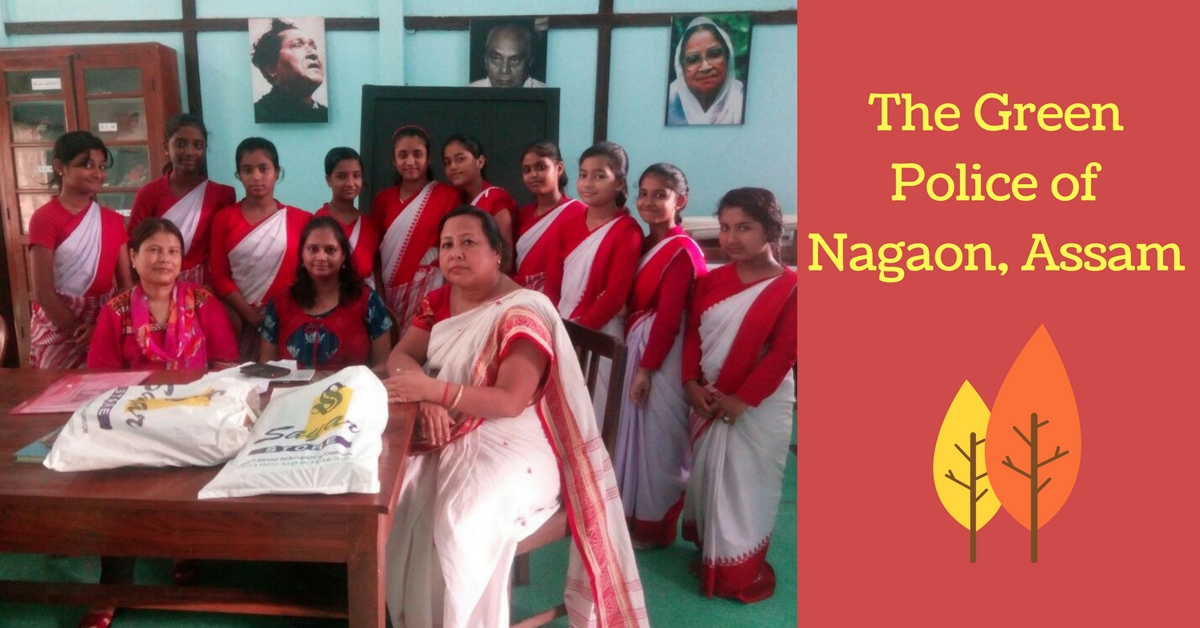 This group of schoolgirls make up the exemplary Green Police of Nagaon town who have, since 2016, taken the responsibility of environmental cleanliness and sustainability of the respective surroundings, upon their shoulders.

Among the many narrow, pothole-filled roads snaking across Nagaon town, a short stretch of the arterial MG Road with its litter free appearance in the Bengalipatti locality leads to Nagaon Bengali Girls’ High School; a government-run school that has of late gained prominence.

They know that it is being monitored by a group of green crusaders from the school on the opposite side of the road.

The environment inside the school is somewhat different from government-run schools everywhere else. The trees here are adorned with plastic bottles cut into cone shapes and wired to tree trunks with mouths of the bottles pointed downwards. The once discarded bottles are used as watering tools for the trees.

Inside one of the many classrooms, a group of 25 young girls clad in white saris with red borders and in ruby red blouses are chalking out plans for their next line of action.

This group of schoolgirls make up the exemplary Green Police of Nagaon town who have, since 2016, taken the responsibility of environmental cleanliness and sustainability of the respective surroundings, upon their shoulders.

Formed in 2015, their first call to action was to put a stop to the open littering of the road in front of their school.

“Earlier pigs, cows and other domestic animals used to stray inside the school. The road was so dirty that the heaps of garage used to unleash a putrid stench. The girls had to cover their noses to enter the school. During classes, it was difficult to continue teaching due to the stench. The girls finally decided that enough was enough. They took a stand and launched a movement to put a stop to the open littering,” said Aparna Bhattacharyya, teacher and guide to Green Police.

That was just the beginning. Their next line of action was to inform neighbours in their localities about the hazards of water contamination. It started off as a simple school project to find out what contributed to the many cases of diarrhoea in their living areas.

The students then converted the findings of the project into a wider campaign to save lives and generate greater awareness on water safety and preservation to other areas in the district.

The team over a period of one year collected close to 20 water samples from households, schools, hand pumps, wells and even from their own water bottles.

The team divided their project into three phases—pre-monsoon, monsoon and post-monsoon.

“Most of the people in our area were suffering from stomach ailments. We collected water samples, and approached the local PHED office that gave us a kit to test the samples,” said Eshani Das, who was the group leader of the team back then.

In 2016 the girls decided to monitor the cleanliness status of the arterial MG Road in front of their school. They met with the chairman of the Nagaon Municipal Board and submitted a proposal for the same. It was accepted and led the board to ask the people living there to refrain from throwing garbage from eight in the morning till eight in the evening.

“It is good that the girls are doing what the adults were supposed to do. Due to their efforts, the road in front of their school is much cleaner,” said Swapan Poddar, who runs a stationery shop at the opposite side of the school.

The girls’ then initiated a campaign is to empower the local community in their neighbouring localities to prevent waste burning and throwing of solid wastes into water bodies.

Last year, the girls began experimenting with organic composting. Using four PVC pipes, that were erected to a depth of three feet below the ground level of their school premises, the school students, maintenance staff, cooks and helpers threw leftovers, waste items, vegetable skins, and other biodegradable items inside the pipes so that the waste gets decomposed.

Last month the girls wrote to Prime Minister Narendra Modi urging him to take an administrative decision and ban public urination by making roadside establishments to maintain one toilet for the public to use free without charge.

You may also like: This Bengaluru Man Fought Alone For 5 Years To Save This Lake. He Is Finally Winning!

“The girls came up with the idea as they had to face the embarrassment of people urinating in public places, and wrote a letter to PM Modi asking him to take the appropriate action,” said Narayan Mazumdar, headmaster of Nagaon Bengali Girls High School.

The school scored an A-plus rank at the recently concluded Gunotsav, a statewide scoring system implemented by the state education department to rank government schools in terms of students’ performances, attendance, proper maintenance of school premises based on cleanliness and sanitation, and other criteria.

“The girls have shown their worth in contributing towards environmental sustainability, and because of their efforts the school has gained much respect,” said Sumit Das, senior accountant Rashtriya Madhyamik Shiksha Abhiyan, Nagaon district.

On World Water Day which was observed on Thursday, the Green Police carried out an awareness drive at Hoiborgaon Shiva Temple, one of the prominent ghats of the Kolong River.

The river here looks the most pathetic here. There is an unbearable garbage stench, and the water here looks sinister.

“We carried placards urging people to save the river. We told members of the temple authorities that used flowers and organic materials used during rituals can be used for composting. We also urged visitors to the temple not to discard flowers; incense sticks packets, ghee bottles and other things by the river bank,” said Ipshita Pandit, a member of Green Police.

Convinced by the approach made by the Green Police, the temple authorities have realised the importance of Kolong River. “Fifteen to twenty years ago the river was clean. Over the past decade, the river has faced the brunt of pollution and callousness from the town folks. It is good that the girls have shown their zeal in saving the river,” said Kashinath Upadhya, a priest at the temple.

Last year on World Environment Day the girls, along with Nripendra Sarma, an engineer at the public health engineering department (PHED) had mobilised community participation in Nagaon town to clean the one-kilometre stretch of Kolong river’s shoreline.

“I am proud of the girls and their zeal. They have set an exemplary trend for the state and the country. Their young minds have realised the dangers posed by the polluted river and its impact on public health,” added Sarma.