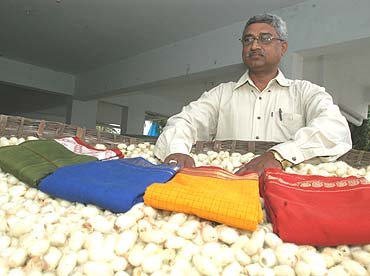 We have seen many protests worldwide against the use of leather products. However, surprisingly, there hasn’t been much resistance against the use of silk garments, especially considering the fact that thousands of silkworms are killed in order to make a small piece of fabric. Kusuma Rajaiah, of Hyderabad, has come up with an initiative to produce silk without the killing of silk worms.

In an article at Outlook India, Mythily Ramachandran writes about Kusuma, who started this ahimsa way of producing silk when he was approached by Janaki Venkataraman, wife of former President R. Venkatraman. Mrs. Venkatraman asked Kusuma if he had any saree which had not resulted in the killing of any silkworms. This led Kusuma to investigate whether silk could be produced without deliberate killing of the worms.

How did he achieve this?:

Silk comes from the cocoons of the silk worm (bombyx mori). In the silk industry, cocoons are killed by steaming or dropping them into boiling water when they are ten days old, before they metamorphose into a moth.

The silk is believed to be the finest at this stage. This is preferred because when the cocoons open naturally at one end, to release the moth, the continuity of the fibre is lost. But maybe not, thought Kusuma.
He purchases cocoons from mulberry farms in Chittoor district. The yellow coloured cocoons are reared in large cane baskets at his residence in Hyderabad. The moths emerge after 8-10 days, piercing the cocoon at one end. “The adult moths have a short life span of four days. During this time they mate and die naturally,” Kusuma explains. The pierced cocoons are spun into yarn. This is then woven into fabrics. Weavers of Nalgonda and Ananthpur district of Andhra Pradesh produce dhotis while fabrics, including saris, are woven by the weavers of Karimnagar district. “All my products are done on handlooms and benefits several weaver families,” says Kusuma. Inspired by Mahatma Gandhi, he calls this silk ahimsa. While ahimsa silk may lack the shine of regular silk, it is comfortable to wear. It’s also wrinkle-free and has a better fall.