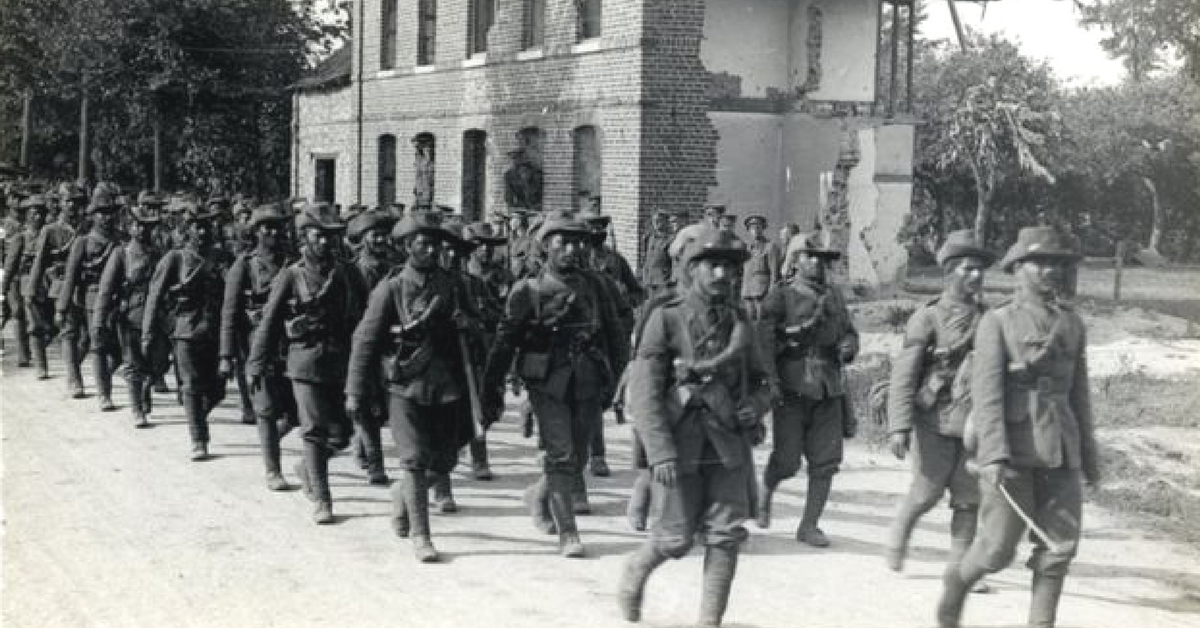 “Tell all India that we shall watch over their graves with the devotion due to all our dead. They showed us the way, they made the first steps towards the final victory,” said French general Marshal Ferdinand Foch. Some old ties we can recall now that #MacroninIndia.

French Prime Minister Emmanuel Macron’s first visit to India coincides with one of the bloodiest battles of World War I in the French village of Neuve Chappelle (March 10-13, 1915). At this site also lies a memorial listing the names of 4,700 Indian soldiers and labourers who died serving the Allied Forces as part of the British Indian Army against the Germans.

“The location of the memorial was specially chosen as it was at Neuve-Chapelle in March 1915 that the Indian Corps fought its first major action as a single unit,” says the Commonwealth War Graves Commission (CWGC).

The Battle of Neuve Chappelle was part of the first offensive launched by the Allied Forces against the Germans. Before the battle, the general perception of Indian soldiers among the colonialists was that they weren’t nearly as effective as their British counterparts. That perception probably changed at the Battle of Neuve Chappelle when the British Army, of which more than half of the attacking force were Indians, launched a valiant assault on German trenches.

“The Indian Corps, which was composed of the 3rd (Lahore) and 7th (Meerut) divisions, went on to fight in some of the bloodiest battles of the first year of the war. At Neuve Chapelle, from 10–13 March 1915, Indian soldiers made up half of the attacking force and despite suffering very heavy casualties succeeded in capturing important sections of the German line,” says the CWGC.

With no wireless technology, telephone lines destroyed by enemy fire and poor coordination between the corps headquarters and the front line, the British-Indian units on the flanks continued their advance when they heard of the early gains. Despite the lack of any artillery cover, poor overall coordination and failing light, these soldiers carried on with their offensive, taking on direct German gunfire valiantly with little fear for their lives.

After nearly three days of bloody fighting, the British-Indian forces broke the stalemate and overran the German forces on a 1,500 metre-front and Neuve Chapelle was captured on the morning of March 13. Approximately 40,000 Allied troops participated in the battle, of which there were 7,000 British casualties and 4200 Indian casualties.

Soldiers of the Indian Corps would go on to make a name for themselves at Ypres Salient, Aubers Ridge, Festubert, and Loos on the Western Front before some of them were deployed once again to fight wars in the Middle East. “The Indian Cavalry Corps remained on the Western Front until the spring of 1918 and Indian labour companies, which had begun arriving in France in 1917, performed vital and often dangerous logistical work behind the lines until after the Armistice,” adds the CWGC.

“In all, from 1914 to 1918, around 90,000 combat and non-combat men fought for the freedom of France and Belgium, serving under the Indian Army and the Imperial Service Troops,” wrote François Richier, former Ambassador of France to India in a 2014 article extolling India’s contribution.

Along the way, many Indian soldiers were honoured with gallantry awards from the British Crown, but the ultimate tribute would come from the Supreme Commander of the Allied Forces and French general Marshal Ferdinand Foch during the unveiling of the memorial for the slain Indian soldiers at Neuve Chappelle in 1927.

“The Indian Troops were thus among the first to show the way to a victorious offensive. It is only right that a Memorial should perpetuate the glorious memory of officers, non-commissioned officers, and men of the Indian Army at the very spot where later on a general attack by the Allied troops was to bring the decisive victory in sight,” he said.

Addressing the Indian Contingent, who had come for the unveiling of the memorial, Foch said: “Return to your homes in the distant, sun-bathed East and proclaim how your countrymen drenched with their blood the cold northern land of France and Flanders, how they delivered it by their ardent spirit from the firm grip of a determined enemy; tell all India that we shall watch over their graves with the devotion due to all our dead. We shall cherish above all the memory of their example. They showed us the way, they made the first steps towards the final victory.”

In total, approximately 1.3 million Indian soldiers served in the First World War and more than 70,000 died in the battlegrounds of northern France. Despite their heroics, India hasn’t probably done enough to remember their contributions. This is largely down to the notion that we were unsure of honouring Indian soldiers who had volunteered to fight a war for the colonialists. Nearly seven decades since Independence our attitudes have somewhat changed.

“For many Indians, curiosity has overcome the fading colonial-era resentments of British exploitation. We are beginning to see the soldiers of World War One as human beings, who took the spirit of their country to battlefields abroad,” says Member of Parliament Shashi Tharoor to the BBC.

While India may not be utterly keen to remember the contributions of her sons, it’s imperative to invoke what former French Ambassador to India François Richier once said, “France will never forget the suffering and the heroism of these men.” This is the spirit that binds the two nations together in blood.