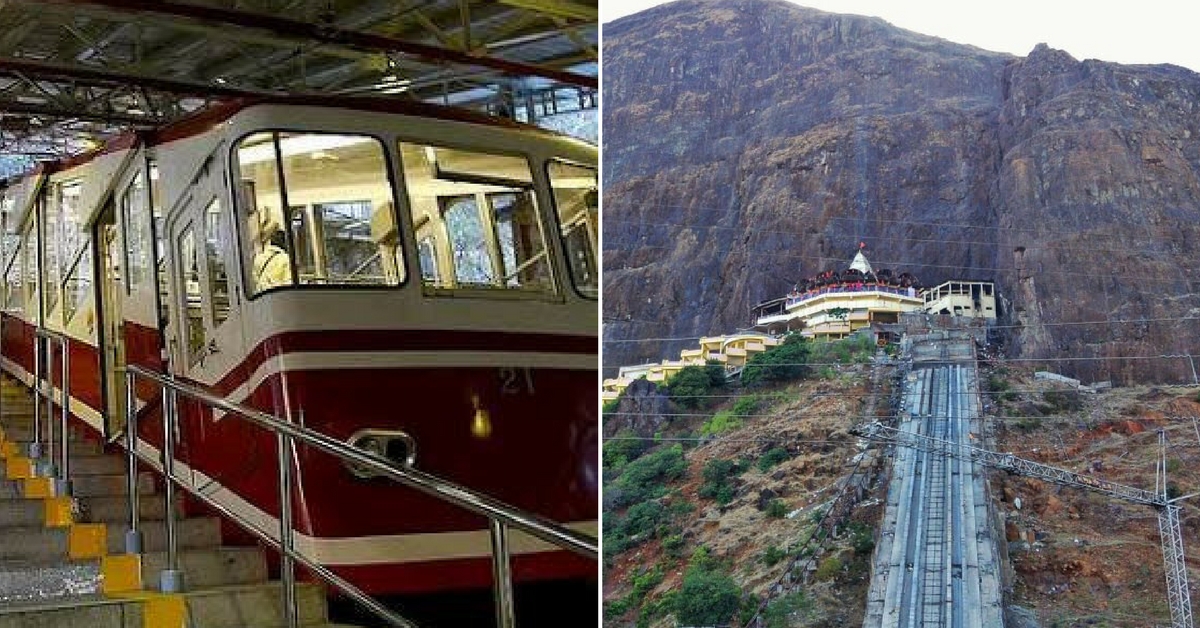 The Funicular Trolley will help pilgrims reach the temple on the hill.Image Courtesy: Twitter

The Funicular trolley will dramatically slice travel time in the region.

You have seen them in movies, and now, India will get its first Funicular Trolley. The contraption is popular in international mountain resorts and will soon be launched in Nasik, Maharashtra, for the purpose of helping pilgrims who visit the famous Saptashrungi Devi hilltop temple.

The funicular trolley is essentially a pair of vehicles pulled up a slope by a cable, which loops over a pulley wheel at the upper end of the track. One vehicle ascends, and the other descends, and thus, they counterbalance each other.

According to RR Hande, a supervising engineer with the Maharashtra Public Works Department, the Funicular Trolley will have an elevation of 330 feet and help pilgrims reach the temple in 3 minutes, as opposed to the current ascent, which is tiring and involves around 510 steps.

The trolley has a 1.2-metre wide railway track, with an 8-metre passing loop that allows two trolleys to travel in opposite directions safely, without interruption. Each trolley can carry 60 passengers at a time, or around 1200 per hour. This should help as the temple attracts approximately 4 million pilgrims annually.

Tickets for adults will cost Rs 80. For citizens aged 75 years and above, physically-disabled people and children below 12, the ticket will cost Rs 40.

Those taking the trolley will be treated to beautiful views of lush green, misty forests on all sides. The rugged seven hill peaks in the vicinity enhance the natural beauty of the region.

You may also like: Mumbai to Pune in 25 Mins? India’s First Hyperloop Project Gets the Green Signal

The Saptashrungi Funicular Trolley is ready for operations, and the Maharashtra State Government is already receiving demands for similar conveniences in places like Jepuri Temple in Pune, and Panhala in Kolhapur, both of which are popular among pilgrims.