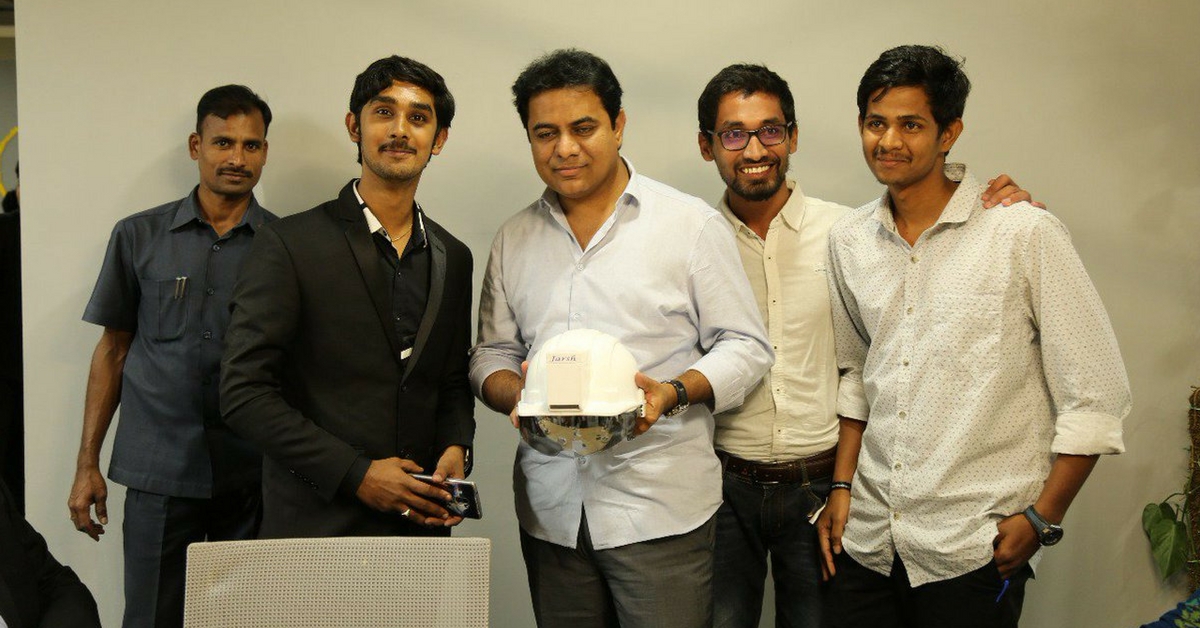 Graduating from VNR Vignana Jyothi Institute of Engineering and Technology, Bachupally, in 2016, the trio has designed the industrial AC helmet and is planning to utilise the same technology in the road safety space going forward.

While wearing a helmet is crucial every time you ride a two-wheeler, most bikers will tell you how difficult it can get our during scorching summers.

But three mechanical engineers from Hyderabad may just have found an innovative answer to this problem – the air-conditioned helmet!

Imagine wearing a helmet that keeps your head cool, your scalp sweat free and hopefully, your mind calm during the killer summer heat!

Christened ‘Jarsh’ – an acronym for Just Another Rather Safe Helmet’, the idea was conceived by three city mechanical engineers – Kausthub Kaundinya, Sreekanth Kommula and Anand Kumar.

Graduating from VNR Vignana Jyothi Institute of Engineering and Technology, Bachupally, in 2016, the trio has designed the industrial AC helmet and is planning to utilise the same technology in the road safety space going forward.

Speaking to The Hindu, Kausthub narrated how the idea of an air-conditioned helmet came about. Travelling a distance of over 60 kms every day on a two-wheeler to his engineering college on the outskirts of the city made him think about the possibility of creating a product like this.

Alongside his two friends and batchmates, Sreekanth Kommula and Anand Kumar, Kausthub decided to explore the market.

Their on-ground research revealed no such product was available in the Indian market. And so they took it upon themselves to create a market for air-conditioned helmets.

Though the plan for such helmets for bikers has a long way to go, the trio managed to develop an AC helmet for industrial use.

“We spoke to industries and found there was a need. We also found mentors… and started developing the product in September 2016,” Kaustubh told The Hindu.

These industrial AC helmets come equipped with a cooling technology and are available in two kinds based on their battery capacity.

Besides thermal protection, it promises eye and impact protection, Kaustabh told the publication.

The trio’s startup is now being supported by the Telangana government’s Research and Innovation Circle of Hyderabad. The innovative helmet which was on display for its pilot sales has already found customers in the Indian Navy which wants it for its dockyard workers and Tata Motors which wants to utilise it for workers at its Lucknow plant, reported the Times of India.

Jarsh is looking forward to kickstarting the commercial production of industrial AC helmets with the capacity of 1,000 helmets per month at its upcoming Mechal facility by the end of March 2018.

The startup by the three 22-year-olds even gifted one AC helmet to IT Minister K.T. Rama Rao, at the BioAsia2018 summit.

“We are getting into (commercial) manufacturing. It finds resonance in Make in Telangana, with 86% of the components made in the State,” Kaundinya told The Hindu.

The trio has decided to donate over 20 such industrial AC helmets to Hyderabad Traffic Police in April.