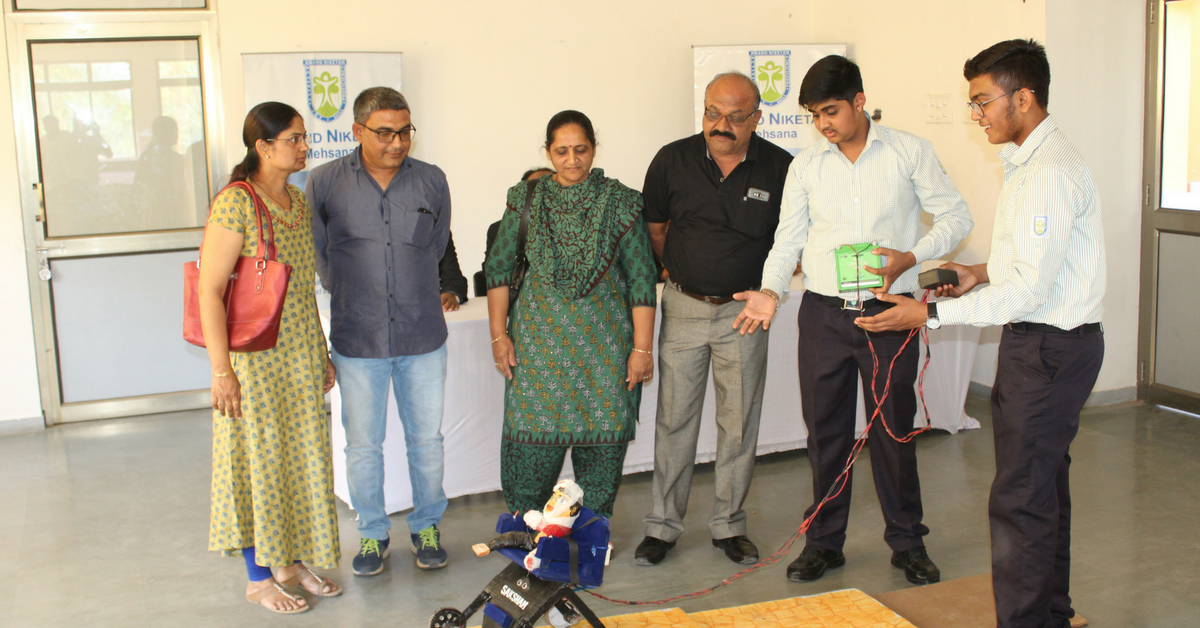 “We designed the prototype using the rocker-bogie mechanism. It also helps on uneven terrains. It’s the same principle used in the Mars Rover Sojourner by NASA.”

‘Necessity is the mother of all inventions,’ they say. In the case of Rohan Patel and Devdutt Patel, grade 8 students from Anand Niketan School, Mehsana campus, the reason they entered the CBSE National Science Competition 2017-18 was the sheer necessity of helping a fellow mate in school.

We, at The Better India, had a chance to speak to the winning team and their jubilant principal, Dr Thresia Paul.

Speaking about how the boys decided on what to make for the competition, Dr Paul says, “One of our grade 10 students had a fractured foot which disabled him from taking the stairs to his classroom. To make it easy for the child, we shifted the entire classroom to the ground floor level. Rohan and Devdutt got thinking about what we would do if more than one student suffered such an injury. From this stemmed their idea of making a wheelchair that would also climb stairs.”

The duo started working on this in April last year, and Rohan spoke of the challenges they faced. “The first prototype was ready in November last year. But that didn’t work well. We had used PVC material and found that it was not sturdy enough. We had to go back to the drawing board to research and work more on it.”

Devdutt speaks about the support they received from their teachers. “After our first prototype failed we managed to pick up the pieces and work harder solely because of the support that our teachers gave us. In less than a month we were able to have our prototype up and running.”

Explaining the mechanics behind the wheelchair, the duo says, “We designed the prototype using the rocker-bogie mechanism. It also helps on uneven terrains. It’s the same principle used in the Mars Rover Sojourner by NASA.”

Rohan and Devdutt had to clear four rounds of scrutiny before being declared the winners at the National level competition.

Having cost a total of Rs 1540, this prototype has brought much cheer and joy to the boys and their school.

“We had tough competition at all levels. The first was held in school where students from various grades displayed their innovations. This was followed by a district-level competition, then a regional-level competition and finally the national level,” says Devdutt.

Platforms like these constantly nudge the students to think out-of-the-box and rewards innovation. The duo received certificates of merit as well a sum of Rs 3000/- for winning the competition.

When asked how they intend to spend the money, Rohan was quick to answer. He says, “We will use this money to build a fully functional working model of the wheelchair.”

Rohan wishes to pursue a degree in aeronautical engineering and Devdutt in electrical engineering. The excitement that they boys are feeling is palpable and infectious.

“We have been getting so many calls. Seeing our photos in the newspaper is great. We even appeared in a news channel,” says Rohan.

Here’s wishing this duo all the best for their future.