More Like Padman: 7 Hindi Films That Broke the Silence on Social Taboos Besides, the much-talked-about Padman, here are a few other films that deserve honorary mentions for waking the Indian audience and using films as a source to open a new dialogue about an array of social issues.

“Use filmmaking for a greater purpose, than to just entertain some drowsy minds. Wake the whole world up with your movies. It has been sleeping for long. Its eternal sleep has become its darkest nemesis. Now is the time to wake it up.”

We often watch films because they help us escape from the harsh realities of the world, right? The three hours spent in a theatre could either make you smile, push you to the edge of your seat, set you into a rib-tickling laugh or put you to sleep.

But seldom do you come across a film that captivates you enough to sit upright and take notice. These are films that wake you up and open your mind. They bring alive on to the silver screen stories that open up dialogues that don’t find space in our daily lives, often because they cause discomfort, challenge our preconceived notions and stereotypes.

And even though mainstream Bollywood, continues to be dominated by highly sensationalised and commercialised films, where the story takes a backseat, a few modern-day Hindi films stand apart.

Besides, the much-talked-about Padman, here are a few other films that deserve honorary mentions for waking the Indian audience and using films as a source to open a new dialogue about an array of social issues. Set in the city of Aligarh, Uttar Pradesh, the film was based on the true story of the head of the Classical Modern Indian Languages Faculty at Aligarh Muslim University, Professor Ramchandra Siras, who was suspended on grounds of morality.

The man’s character was assassinated and he was fired from his position of Reader and Chair of Modern Indian Languages after his privacy was invaded by a film crew from a local TV station, who forcibly barged into his house and filmed him having sex with a rickshaw-puller.

The film stars renowned actor Manoj Bajpayee in the role of Siras and chronicles the trials and troubles of the professor after being forced to leave his housing at the university. He is contacted by a journalist (Rajkumar Rao) who is sympathetic to him, and his case is taken up in court. The court rules in his favour and Silas’ suspension is revoked, but fate has other plans. The film was lauded at its world premiere at 20th Busan International Film Festival, receiving a standing ovation. Bajpayee won huge critical acclaim and a Filmfare Critics Award for Best Actor for his portrayal of Ramchandra Siras.

In the light of the ongoing LGBTQA movement in India, the film was a milestone in the history of Indian cinema that opened a much-needed conversation about how India treats a visible and yet often ignored minority group.

Margarita with a straw The 2014 drama brought to the screen a beautiful story of a teenager, Laila with cerebral palsy, and chronicled her journey towards acceptance, exploring her sexuality and creating a more inclusive environment.

Directed by Shonali Bose and starring Kalki Koechlin as Laila, who moves from New Delhi to Greenwich village for her undergraduate education, it is a coming of age story following her complex relationships with a blind girl (Sayani Gupta), her mother (Revathi), and William Moseley.

The idea of the story came to Bose following a casual conversation with Malini Chib, her cousin and a disability rights activist, with cerebral palsy. Chib spoke about her desire to have a normal sex life. She served as an inspiration for Laila’s character. For the first time, in the history of Indian cinema, the silver screen portrayed that basic right of differently-abled persons to be perceived as sexual beings too.

Lipstick under my Burkha The film battled censorship after it was denied release in India in January 2017, stating “There are contagious [sic] sexual scenes, abusive words, audio pornography and a bit sensitive touch about one particular section of society.” But eventually, with support from media and appeal to the Film Certification Appellate Tribunal(FCAT), the film was released with 16 voluntary cuts and an A certificate.

The stories of each of the four women and their innate desire, fantasies, and need for freedom make it a must watch, especially for women. A 2015 film by Leena Yadav, Parched chronicles four rural women in a desert village of Rajasthan. While Rani (Tannishtha Chatterjee) is a widow struggling to support her old mother-in-law and rebellious teenage son, Gulab (Riddhi Sen) loiters with spoilt friends and spends nights at brothels. Janki (Lehar Khan), who is the Gulab’s child bride, hopes to stop the marriage by chopping off her hair but fails. Lajjo (Radhika Apte) is in an abusive marriage with an alcoholic husband, Manoj (Mahesh Balraj). Having failed to conceive, Lajjo is mocked for being infertile by her husband and society. Last but not the least is Bijli (Surveen Chawla), an erotic dancer in a travelling entertainment company who doubles as a sex worker and is a close friend of Rani and Lajjo.

Marred by patriarchy, child marriage, dowry, marital rapes and physical and mental abuse, Parched narrates the struggles of these women and their escape to freedom.

Read more: 20 Hindi Movies That Dared To Break The Mould And Take On Social Issues 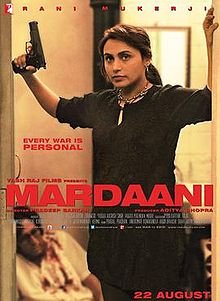 A 2014 crime thriller, the film starred Rani Mukerji in the lead role, with Jisshu Sengupta and Tahir Raj Bhasin in supporting roles and narrated the story of a policewoman who in the process of saving a kidnapped teenage girl uncovers human trafficking by Indian mafia.

Shivani Shivaji Roy (Rani Mukerji), an exceptional Mumbai Police officer is on the chase for Delhi-based child trafficker and drug peddler, Karan Rastogi (Tahir Raj Bhasin). She wants to rescue Pyaari, who she once saved from being sold by her uncle, who she loves like a daughter. She flouts rules and endangers her family life to nab Karan and save Pyaari.

The film’ was given tax-free status by in Madhya Pradesh Chief Minister Shivraj Singh Chouhan in its first week of release and later by Uttar Pradesh and Maharashtra, due to its social message. A 2014 film by Nagesh Kukunoor, it chronicles the story of 14-year-old Lakshmi (Monali Thakur), kidnapped from her village by Chinna (Nagesh Kukunoor) and forced into prostitution.

Lakshmi is taken to Chinna’s older brother and boss, Reddy’s home (Satish Kaushik), under the pretext of being given the job of a domestic worker, but is later raped by Reddy himself. Chinna then forces her to work at a brothel managed by Jyothi (Shefali Shah), who is sometimes a mother but a strict pimp to the girls.

Lakshmi fails miserably at escaping every time due to a mafia-police nexus and Chinna’s power. Reeling from the horror, she survives with the help of the other girls but doesn’t give up. Graphic in detail at times, the film brings to light the harsh realities of human trafficking and child prostitution in rural India. It is the story of a retired lawyer stepping in to fight for three young women implicated in a crime for attempted murder and character assassination. The film challenges society’s long-standing regressive views about women who stay out late, move out of their parental home, live an independent life, drink or smoke etc. It emphasises the importance of consent and the need for men to understand that no means no.

The film won the National Film Award for Best Film on Other Social Issues and was lauded by critics for backing the cause of women.