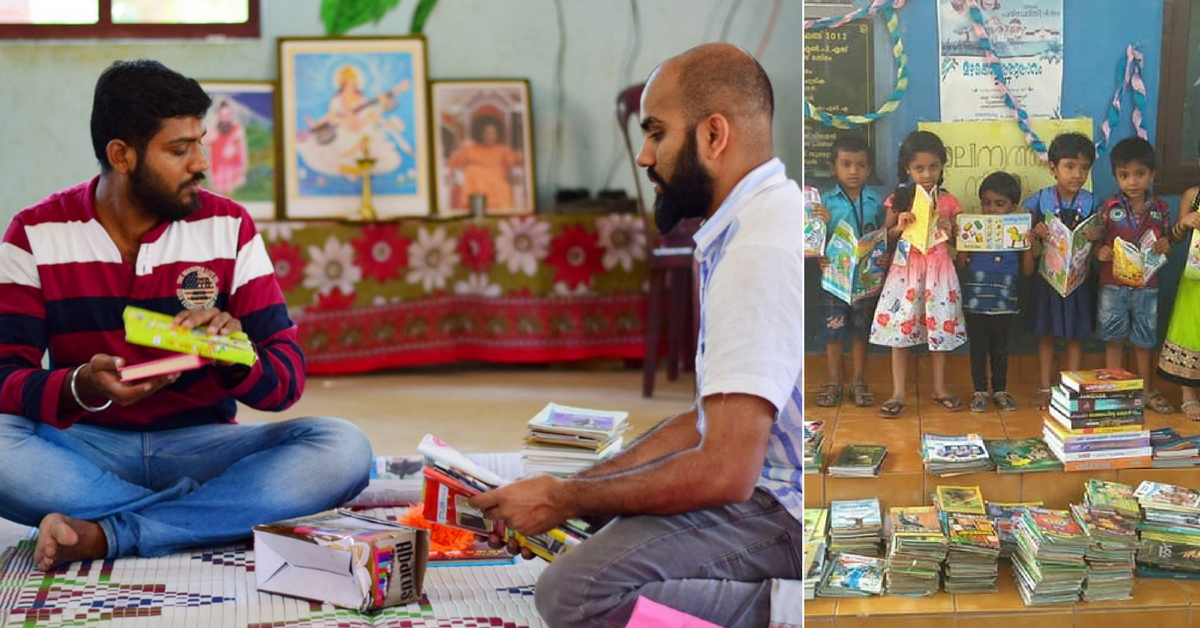 Inviting anyone and everyone who is willing to donate books, the drive intends to collect books which will be used to put together libraries in government schools and orphanages identified by the team across Thiruvananthapuram.

“I have always imagined that Paradise will be a kind of library.”
—Jorge Luis Borges

Perfectly illustrating the essence of this quote, a few techies from Thiruvananthapuram’s Technopark are on a mission to conjure up several such paradises for children across the city.

Bookathon is a joint initiative by Tejus and HANDS, two charitable organisations which function out of Technopark, that aims to collect books and set up libraries in government schools and orphanages in Kerala’s capital.

Inviting anyone and everyone who is willing to donate books, the drive intends to collect 50,000 books which will be used to put together 120 libraries identified by the team across the city.

In fact, four libraries with a total of 1848 donated books are already functioning in the PEPF Community Library in Thenmala, Nilavu Public Library in Nedumangadu, and two Lower Primary (LP) schools in Chenkottukonam and Kottur.

Although Bookathon formally took flight in the first week of February, its ideation began in December last year, when Ram Kumar, a native of Thenmala, wanted to start a community library in his hometown and started to collect books for the cause.

You may also like: With Over a Lakh Books, This Septuagenarian Couple’s Library Is Worth a Visit!

“I had discussed the idea with Brijesh PI, a fellow techie at Technopark and one of the co-founders of Tejus. Not only did he show a keen interest, he even donated few books. Shortly after that, he suggested the idea of Bookathon, which took flight after both organisations came aboard,” says Ram to The Better India.

The drive is getting a fantastic response. In fact, MP Shashi Tharoor not only appreciated the initiative but also tweeted about the Bookathon to help it gain momentum.

With a strong team of 30-35 volunteers, most of whom are associated with some non-profit organisation or the other, the team initially focused on only collecting copies of Balarama and Kalikkudukka, two hugely-popular Malayalam comic magazines for kids.

However, after setting up the first library, they realised something.

“While children loved these books, we noticed that the same initiative could be extended for the parents as well, who come to school and wait until their kids’ classes are over. So now, we are collecting all genres of books, which includes magazines like Grihalakshmi and Vanitha, as they will appeal to the parents too,” explains Ram.

The immediate aim of the drive is to collect 50,000 books, but Ram mentions that upon hitting that milestone, the team intends to spread its wings by raising its target and reaching out to more institutions.

“Currently our focus lies in Thiruvananthapuram, but we are sure that with the support that we’re receiving, we would be able to take the drive to greater heights,” he says.

Over 25 companies within Technopark, which is reportedly Asia’s largest IT park, have signed up to spread the love for books and reading by donating used books.

Irrespective of where you hail from, you can also be part of Bookathon. “For folks within the city, we have been arranging pick-ups. Anyone who is willing to donate books from any part of the country can reach out to us, and we will do the needful,” Ram adds.

With a cause as amazing as this, we hope that the fading culture of reading blossoms once again and the younger generation embraces books with as much love as the previous generations did.