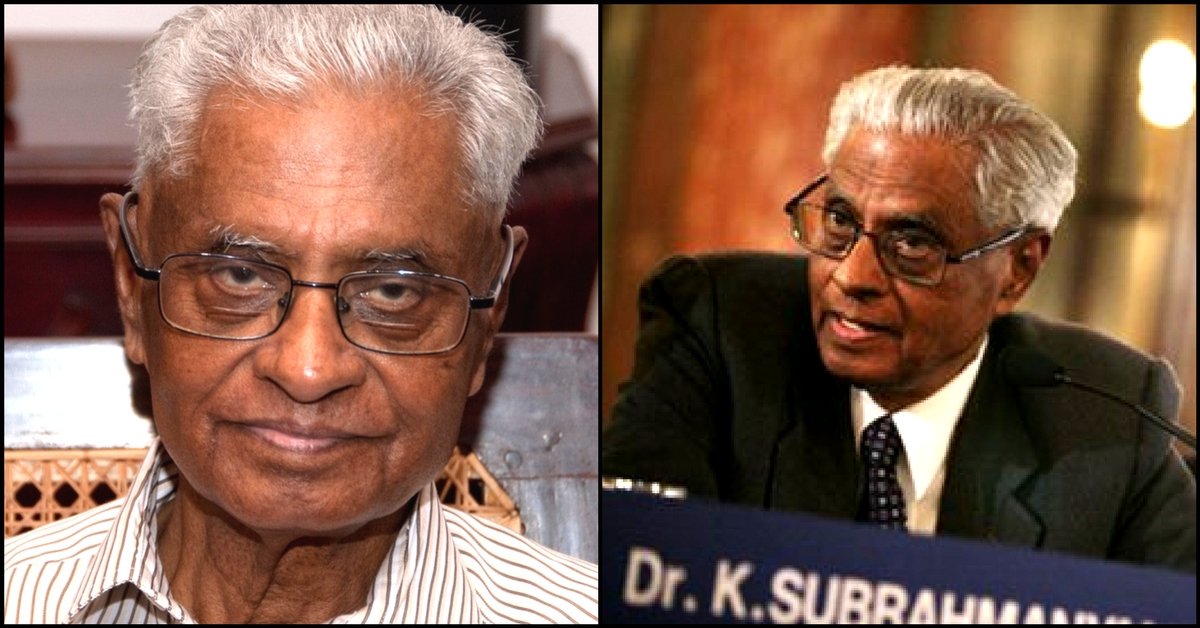 A brilliant IAS officer and strategic thinker, K Subrahmanyam played a key role in shaping Indian defense and security policies for almost half a century.

“Knowledge, not weapons, will be the currency of power in this century.” – K Subrahmanyam

Sometime in the late 1960s, during a seminar at London’s Institute for Strategic Studies, a young visiting scholar from India stands up and gives the British Secretary of War a lengthy discourse on the West’s “hypocrisy” and “atrocities”, from Hiroshima to Vietnam. The resulting uproar ensures that he is not invited back.

Nearly two decades later, in 1984, American political scientist Professor Kenneth Waltz visited the Institute for Defence Studies and Analyses (IDSA), to give a talk supporting India’s right to a nuclear program. His host is the same young man from London, the one who was not invited back and who was now the director of IDSA.

These are just two of the many memorable anecdotes about K. Subrahmanyam. A journalist, civil servant and the man widely remembered as India’s foremost thinker on strategic policy, Subbu (as he is fondly referred to by friends) died at the age of 82 on February 2, 2011, in New Delhi.

Here is a tribute to the brilliant IAS officer who played a key role in shaping Indian defense and security policies for almost half a century. Hailing from Tamil Nadu, Krishnaswamy Subrahmanyam grew up in Tiruchirapalli and Madras, After completing his schooling, he pursued his BSc and MSc in Chemistry from the University of Madras.

In 1951, he appeared for the Indian Civil Services examination, secured the first rank and was appointed to the Indian Administrative Service. He went on to hold several sensitive positions in the central government, including the Chairman of Joint Intelligence Committee, the Secretary of Defence Production and the convener of the National Security Advisory Board.

He also served as the home secretary of Tamil Nadu for during the years of Emergency. At a time when many bureaucrats in the country became willing accomplices to the suspension of civil liberties, the upright administrator used his powers to shield those being targeted.

After 15 years of stellar service, he was appointed a Rockefeller Fellow in Strategic Studies at the London School of Economics in 1966.

His rise to prominence, however, would be as the man who built India’s first and foremost defence policy think tank, the Institute of Defence Studies and Analysis (IDSA). Appointed the Director of the newly created IDSA in 1966 (he held the post till 1975 and again from 1980 to 1989), Subrahmanyam helped the institute emerged as India’s premier think-tank.

During this period, Subrahmanyam worked closely with not just every one of India’s prime ministers (beginning with Jawaharlal Nehru), he also worked with Homi Bhabha, Raja Ramanna, Vikram Sarabhai and all the pioneers of India’s nuclear and missile programme.

Straddling the fields of administration, academic research and defence policy with an unparalleled felicity, he also played a pivotal role in designing India’s nuclear programme and strategic policy.

He chaired several committees and commissions of inquiry set up by the government, including one on the Indo-Pak war of 1971. Incidentally, he also chaired a task force on ‘Global Strategic Developments’ that later provided the strategic framework for the India-US civil nuclear energy cooperation agreement.

A thinker, a researcher and a true visionary, Subrahmanyam also brought experts from different disciplines and different professional backgrounds into the folds of Indian strategic policy community. Furthermore, he sought a wider constituency of views through a sustained media presence.

As such, he built a coherent intellectual framework on strategic issues that helped provide for India’s foreign and security policies in a world buffeted by uncertainty and changing power equations. Between 1974 and 1986, Subrahmanyam served on a number of United Nations committees and other international study groups that were set up on issues such as regional co-operation in the Indian Ocean, disarmament, nuclear deterrence and global security threats. All of this sharpened his world view.

This was an era in which nuclear issues were a contentious topic in India and Subrahmanyam’s expertise had led to him become India’s prime nuclear hawk. An ideological champion of India’s nuclear deterrent, he was appointed convenor of the country’s first national Security Council Advisory Board by the then-government in 1998.

It was this board that drafted India’s Nuclear Doctrine. Equipped with significant aspects like the declared No First Use policy and the consequent directive on second strike capability, this
doctrine now governs all policy aspects relating to usage and deployment of the nation’s nuclear arsenal.

In 1999, he was appointed the chairman of the Kargil Review Panel, which recommended, and partially set into motion a comprehensive reform of India’s defence, intelligence and security apparatus. In fact, this committee’s recommendations led to a major restructuring of border management and Indian intelligence.

The same year, Subrahmanyam declined the honour of a Padma Bhushan (India’s third highest civilian honour), stating that bureaucrats and journalists should not accept government awards. After retirement from government service, Subrahmanyam continued to write regular columns on strategic affairs in several newspapers, including Times of India, Tribune and Business Standard.

Interestingly, Subrahmanyam was on the editorial board of The Times of India when India conducted the ‘Shakti’ nuclear tests in 1998 and the newspaper famously withheld his comments (temporarily) while it condemned the weapons tests!

He also authored several books and reports, that continue to permeate Indian strategic thought. The one thread that ran through all of his writings was the need to increase India’s real strategic autonomy. For him, non-alignment was a strategy, not an ideology, and meant responding smartly to changes in the international situation facing India.

A strong advocate of electoral and political reform, he would also often argue that the values enshrined in the Indian Constitution—secularism, pluralism, democracy and quasi-federalism—were imperative to hold India together.

On the 40th anniversary of IDSA’s founding in 2005, then-Prime Minister singled out Subrahmanyam’s achievements for praise, saying,

“Subrahmanyam’s incisive writings continue to stimulate and contribute to the thinking of strategic analysis and policy makers in this vital area of national concern. We look forward to many more years of active contribution from this doyen of the strategic community in India.”

Two years later, IDSA – an institution he helped transform into one of Asia’s top think tanks – honoured him by instituting an annual K Subrahmanyam Award for the best published research paper.

In 2011, Subrahmanyam died in New Delhi after a courageous battle against cancer.

Despite maintaining the highest traditions of the bureaucracy through out his distinguished career, K Subrahmanyam remains a little-known figure for most Indians. Its time we acknowledge the many contributions of this brilliant man whose pragmatic recommendations had a direct bearing on some of India’s most important national security decisions of the last half-century.