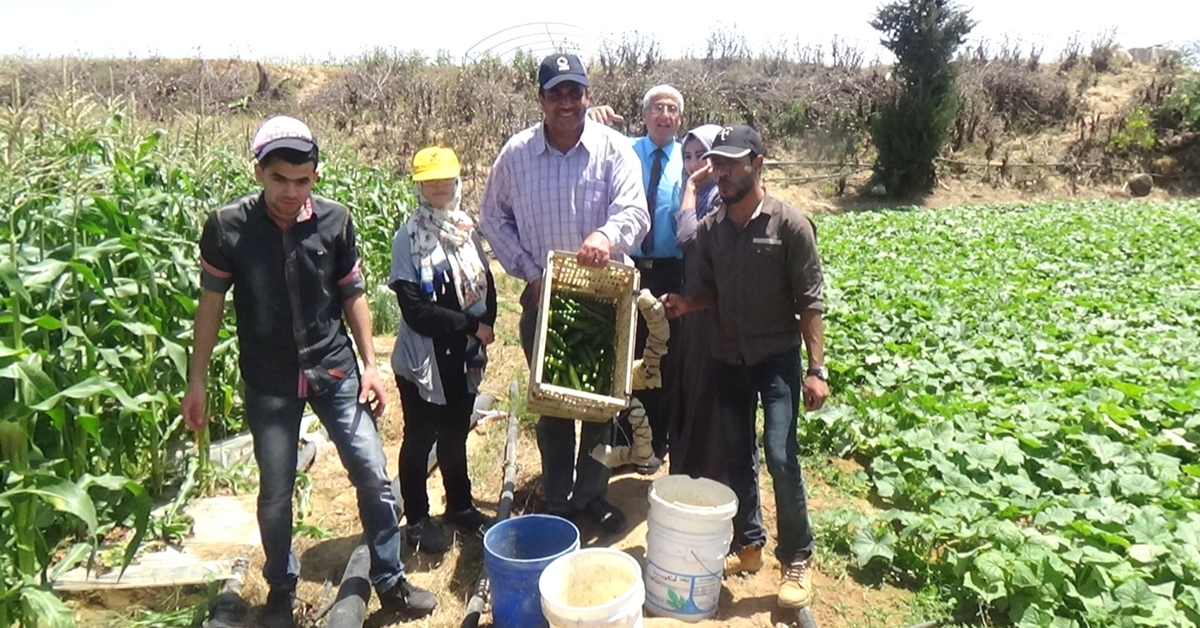 Dr. Medoukh has helped the development of a nonviolent economy in the Gaza Strip by mobilising Palestinians to produce, use and market local products.

Teacher and researcher Dr Ziad Medoukh is a Palestinian professor and the Director of the French Department at Al-Aqsa University in Gaza, Palestine. He was the first Palestinian to be recognized as the ‘Knight of the Order of Academic Palms of the French Republic’ in 2011.

Dr. Medoukh has helped the development of a nonviolent economy in the Gaza Strip by mobilising Palestinians to produce, use and market local products.

He initiated agricultural cooperatives and organic farming in the community and handicrafts in villages and refugee camps.

Farmers and families were also helped in setting up small enterprises in the Gaza Strip – producing cheese, olive oil and preserves – to promote local products, create employment and improve the standard of living. He also accompanies fishermen, to protect them if they get tangled with the Israeli Navy.

Also Read: This Woman Has Spent a Lifetime Uplifting Over 80,000 Children in Delhi

Also, Dr Medoukh’s work has been impactful as a Coordinator of the Peace Centre, and as the host of a French radio show on Gaza and the local population in the Gaza Strip.

But Dr Ziad’s most far-reaching work has been the youth of the Gaza strip. He invites individuals and organisations to his university to share diverse information with his students. The students then organise meetings with families in neighbourhoods to sensitise people about non-violence, human rights and its applications.

The most significant concern for Dr Medoukh is to sensitise those in the Gaza Strip about non-violence and peace, either directly through the actions and activities of the Peace Centre or indirectly via his testimonies, writings, poems, articles and information dissemination on non-violent actions in Gaza.

He is an indefatigable speaker for Palestine in French-speaking countries. Apart from his own participation in meetings on non-violence; teachers and the youth from his organisation are also exposed to non-violence and peace through trips to France, Switzerland, Jordan, Egypt and Lebanon.

Indeed, Dr Medoukh personally strives to sensitise and train future teachers in Palestine, which helps disseminate a culture of non-violence in Palestinian society.

Dr Ziad Medoukh has published more than 500 articles in Arabic and French which are published in various Palestinian and French newspapers and websites.

Dr Medoukh along with his friends set up the Peace Center in 2006. Its actions, following Gandhian principles to build a non-violent economy, have been able to show the importance of education as a form of non-violent resistance in Palestine.

This has motivated young people to study in the University, despite the difficulties they face in their daily life. The Peace Center has organised more than 120 workshops between 2006 and 2017, including courses on human rights, democracy and peace.

The youth become ambassadors, who visit other members of the community to propagate non-violence and human rights.

In 2014, and after the last Israeli military offensive against Gaza, Dr Ziad Medoukh set up a psychological support cell to deal with traumatised children of war. Between 2014 and 2017, the psychological support unit organised more than 100 sessions in the kindergartens, schools and shelters for children in Gaza. More than 4,000 children have benefited from these sessions.