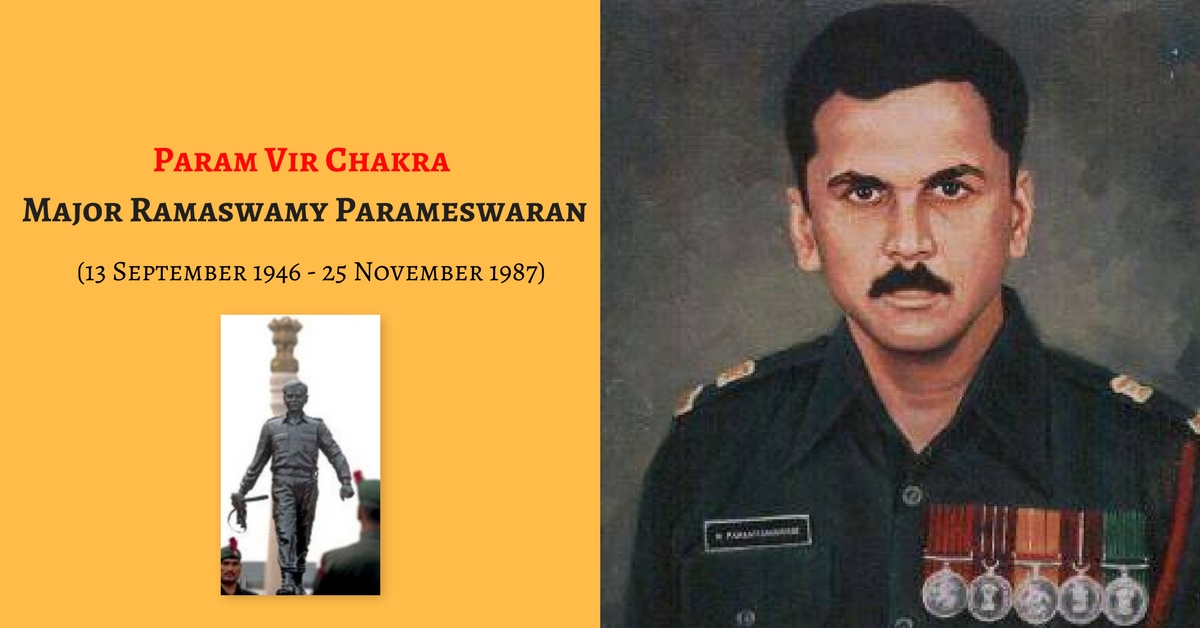 Despite the bullet burning a hole in his chest, he did not let the pain overpower his next move. Snatching the rifle from the militant, the Major shot him dead. Even as he felt his own demise near, he continued to shout orders and command his soldiers.

The year was 1987. Major Ramaswamy Parameswaran, commissioned to the Mahar regiment for Operation Pawan, as per the Indo-Sri Lanka Agreement, was sent to Sri Lanka to maintain law and order as part of the part of the Indian Peace Keeping Force (IPKF).

On the night of 25th November 1987, the Major was returning with his column of troops after a search operation in the stark darkness of the night, when, to their surprise, a group of militants ambushed them.

But the Major Parameswaran acted in the nick of time and encircled the militants from behind. He charged into them, taking them by surprise. Before they had the time to react, hand-to-hand combat had already begun. But tragically, a militant shot him.

Despite the bullet burning a hole in his chest, he did not let the pain overpower his next move. Snatching the rifle from the militant, the Major shot him dead. Even as he felt his own demise near, he continued to shout orders and command his soldiers.

Major Parameswaran may have succumbed to his wounds, but his sacrifice did not go in vain. That night, five militants were killed, and three rifles and two rocket launchers were recovered.

In honour of his valour and undaunted bravery, Major Ramaswamy Parameswaran was posthumously awarded the Param Vir Chakra, the highest military honour in India.

The Officer’s Training Academy in Chennai, where he passed out of almost 45 years ago, named its drill square and army welfare housing board building in Kodambakkam after him. However, his own batchmates always thought he was overlooked by his own state, Tamil Nadu.

Speaking to the Times of India, Colonel Ram Krishnan, a close friend of Major Parameswaran, expressed how men who received Param Vir Chakras were celebrated and their families were given compensation and honours.

But Major Parameswaran did not get any of it, solely because operations in Sri Lanka were considered sensitive and all political parties in the state openly opposed the deployment of Indian army units there – at the time.

Saddened when their batchmate, an exemplary soldier, and leader, did not get the same honours other Param Vir Chakra recipients got in their states, the officers decided to take the matter into their own hands after consulting the OTA.

Almost after four and a half decades, these 37 retired officers, batchmates of Major Ramaswamy Parameswaran, united to unveil a life-size bronze statue of him at OTA.

All with their own money!

Pooling in over Rs 7 lakh from their own pockets and receiving a grant of Rs 1 lakh from Major Parameshwaran’s own Mahar regiment, the officers unveiled a 6-foot tall bronze statue weighing over 300 kg.

This plan to honour their beloved batchmate ‘Parry,’ as they fondly called him, first came to the officers after they met at a gathering in Thiruvananthapuram under Colonel KG Nair a year ago, reported the Times of India.

By then, many of these officers had retired, left the army and even moved to different parts of the country. But the geographic distance did not deter them from putting their plan into action.

Read more: How the Army Rushed to the Rescue of a Forgotten Boxing Hero – Twice!

Everybody stayed connected and coordinated efforts under Lt General Ram Pratap, the senior-most officer of the course, and the leadership of Colonel Ram Krishnan.

Of the 21 recipients of the Param Vir Chakra, Major Parameswaran is the only officer from the OTA to have been conferred with such an honour.