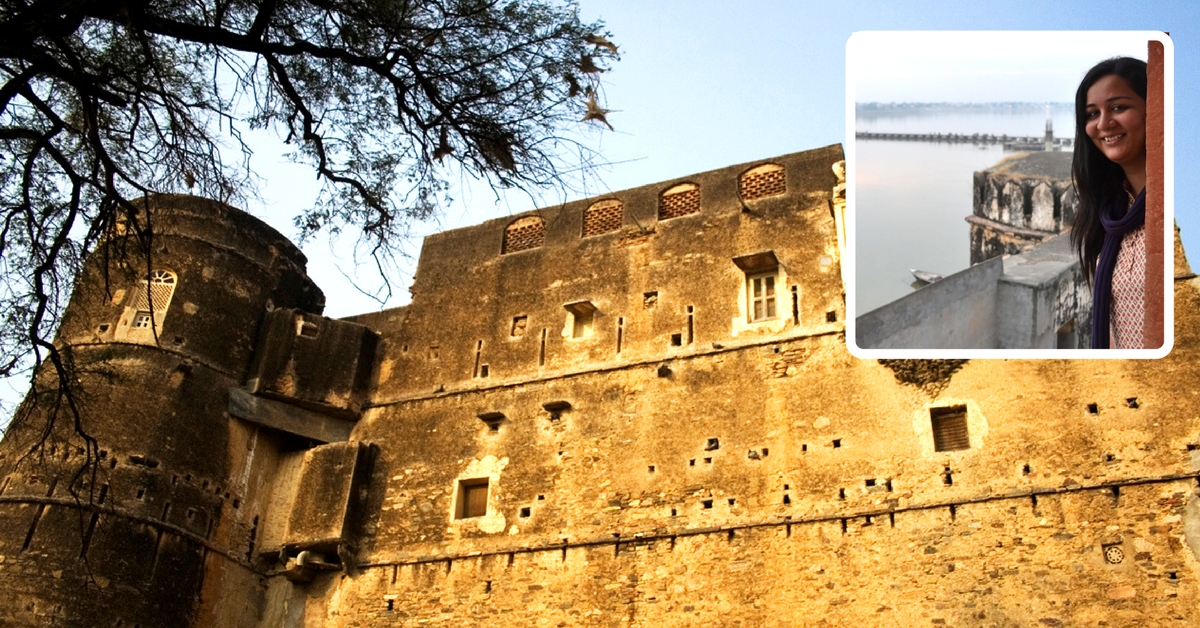 It was during one of her visits to her native village that Priyamvada found a reason to quit her job in Mumbai and never go back. The reason? Her ancestral fort.

Meja is a small village in Bhilwara district of Rajasthan with a population of around 10,000 people. The men are usually involved in agricultural activities or work as labourers in the factories of the nearby textile town of Bhilwara. Meanwhile, the women are restricted to doing household chores.

A native of the village, Priyamvada Singh was working as a freelance content strategist of non fiction shows in Mumbai. She would only visit Meja during short breaks from work to meet her family.

It was during one of these visits that Priyamvada found a reason to quit her job in Mumbai and never go back. That reason? Her ancestral fort in Meja.

The story goes that Priyamvada’s ancestor Rawat Amar Singh was granted land through the Jagirdari system in 1870. The construction of the Meja Fort began soon after and was completed in five years. The fort has been the property of her family ever since, with its current custodian being her father, Rawat Jitendra Singh.

However, it has been in a state of neglect for years.

“My grandfather worked for the Indian Railways, and my father is a bureaucrat with the state government. Their jobs kept them away from the village for many years with little time for the upkeep of the fort. Due to this, we faced many issues. Neighbours encroached the fort’s premises. Some of them even opened the drain pipes in the compound and started using one corner as a dump yard,” Priyamvada told The Better India.

She added that trees had grown out of the fort’s walls and the roof had developed water seepage issues. One could find owls and bats living there, and only two rooms had electricity

So, Priyamvada decided to restore her ancestral fort to its former glory. 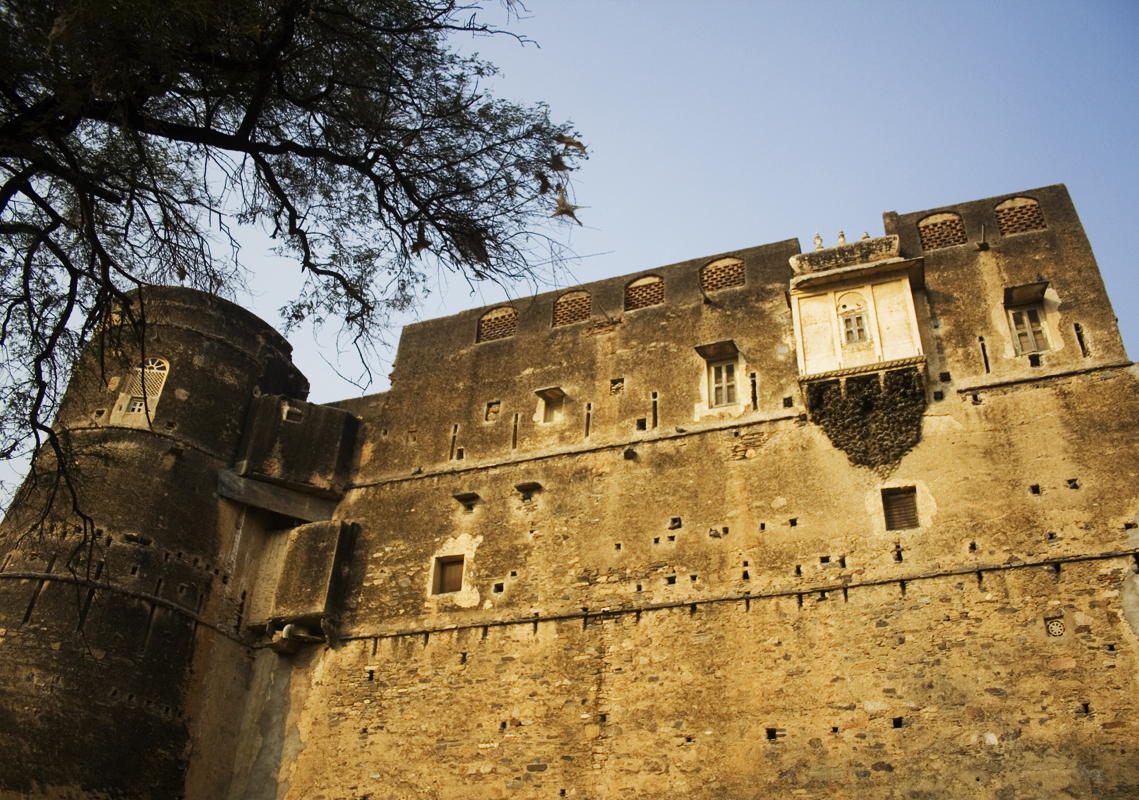 Step one? She packed her bags and decided to live there.

“The fort is my only home in Meja, so I had to stay there. My father was posted in Udaipur, and my grandparents live in Ajmer, which is about 2.5 hours from Meja. There was no way I could have lived in either of the cities and got the work done,” she told TBI.

Initially, her family was quite reluctant to let her stay all alone. Even the villagers thought she was crazy. However, things changed when Priyamvada started her project.

“Since I was trying to revive old construction techniques, I thought of involving retired masons because they had the knowledge and experience to work with things like lime plaster (choona) or dry masonry with stone, etc. I got young and old masons to work together so that these ancient construction techniques could be passed onto the next generation. For the work at the fort, they were paid by us. But soon after, it worked to their benefit as their work got noticed and they got called to work for other restoration projects across Rajasthan,” said Priyamvada.

With her help, men who weren’t earning at all over the last few years and utterly dependent on their families got the opportunity to earn again. 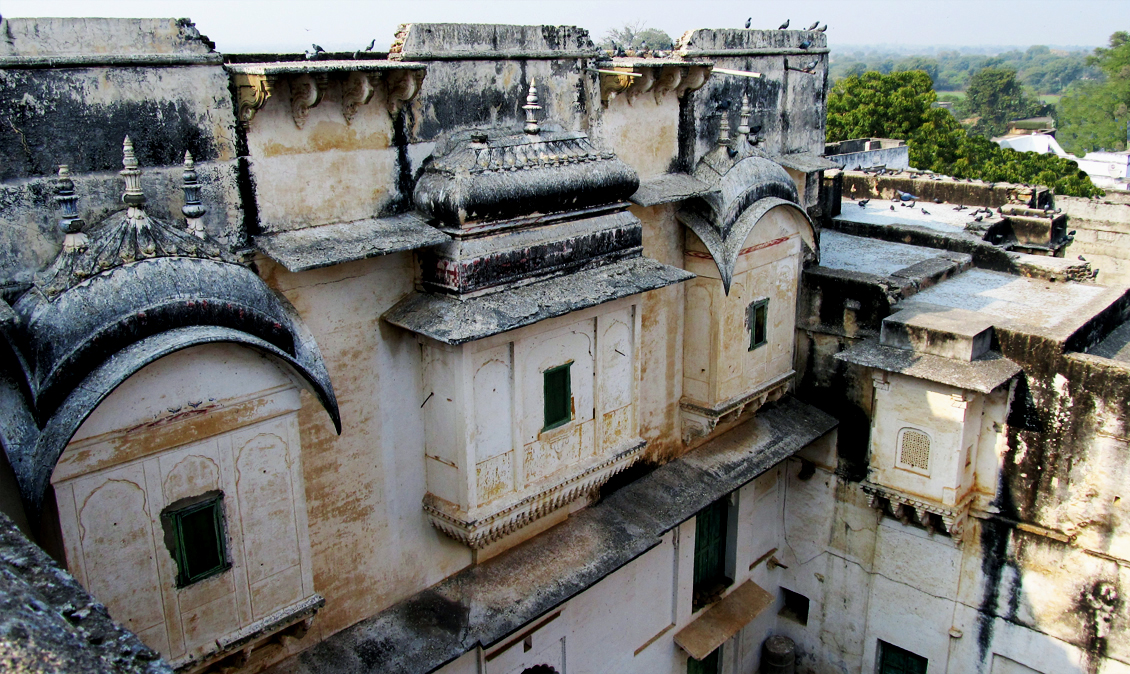 One of them, 45-year-old Shiv Ji Bhati, told TBI, “I lost my eyesight in an accident a few years ago and became jobless. It was getting really difficult for me to take care of my wife and three kids until the fort project came up. I have been engaged in chores that I can do without my sight like scraping off old lime plaster from stone walls to reveal their original look, digging holes for plantation, scrubbing old doors with sandpaper to polish them and filtering sand through an iron mesh for finer construction.”

On seeing her spearheading this project, many local women joined in as labourers. They too realised their potential beyond domestic chores. 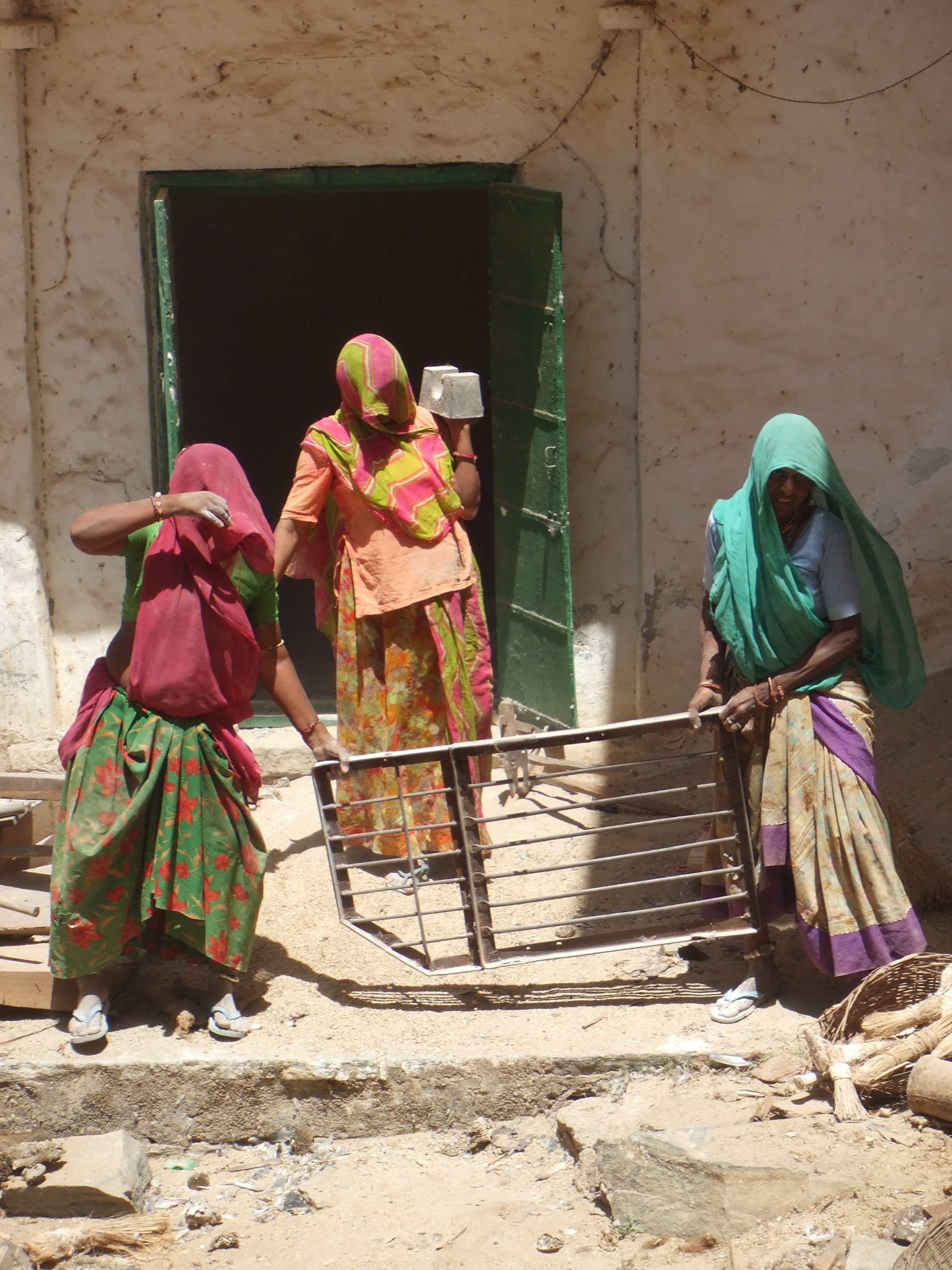 34-year-old Maya Devi told TBI, “After becoming a widow at a young age, I was burdened with the responsibility of single-handedly raising my school-going daughter. I was financially dependent on my in-laws until I started working at the fort. All these years I was known as ‘Chandu Ki Bahu’ in Meja. Now, after almost a decade of being here, people finally address me by my name. It’s a great feeling.”

Once they started the repair work, one thing led to another.

Once, when Priyamvada was cleaning the fort, she found a lot of old books on history, geography, travel, moral science and Hindi literature. She decided to open up a community library.

Soon she received old and new books from friends, family and colleagues and is now in the process of collecting more to start a full-fledged library for the community within the fort.

Priyamvada has also begun organising activities like blood donation camps and yoga camps at the fort to get the community together. 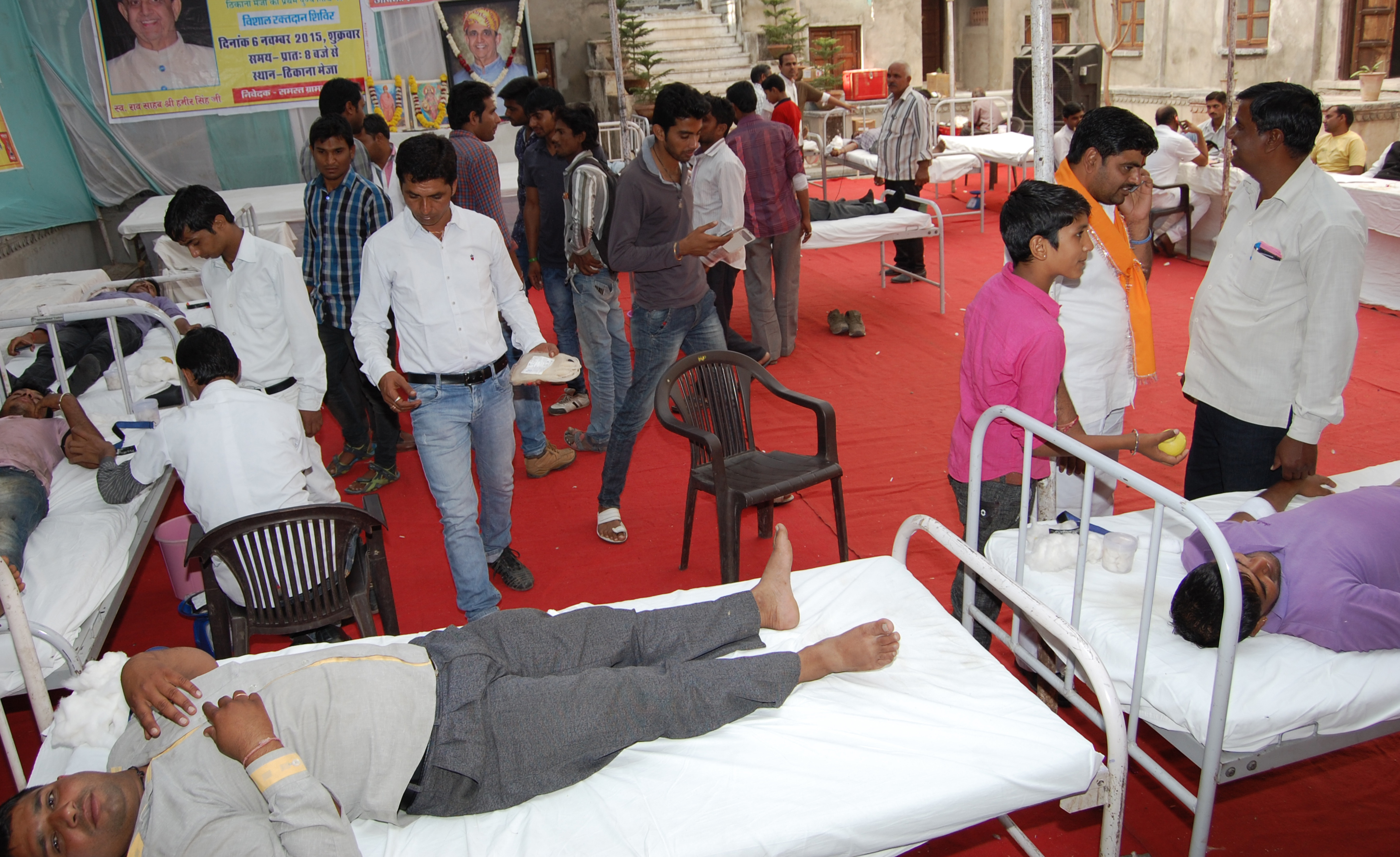 They celebrate local festivals like Gangaur and Jal Jhulni Ekadashi there. Even competitions have been organised to bring the young together.

“These are all community-driven projects that we organise with a lot of local help. Now that people have realised the importance of these activities, everyone is doing their bit to help. For instance, when I thought about doing the blood donation camp, we offered the fort as the venue. It was the villagers who helped me get in touch with a Bhilwara-based NGO, and once we had them on board, we got in touch with a hospital in Bhilwara who sent us volunteers – a team of doctors and nursing staff to get the job done. The villagers turned up in great numbers and made the camp a success,” she said.

As far as the construction work goes, they have almost completed work on the outer boundary and the landscaping. 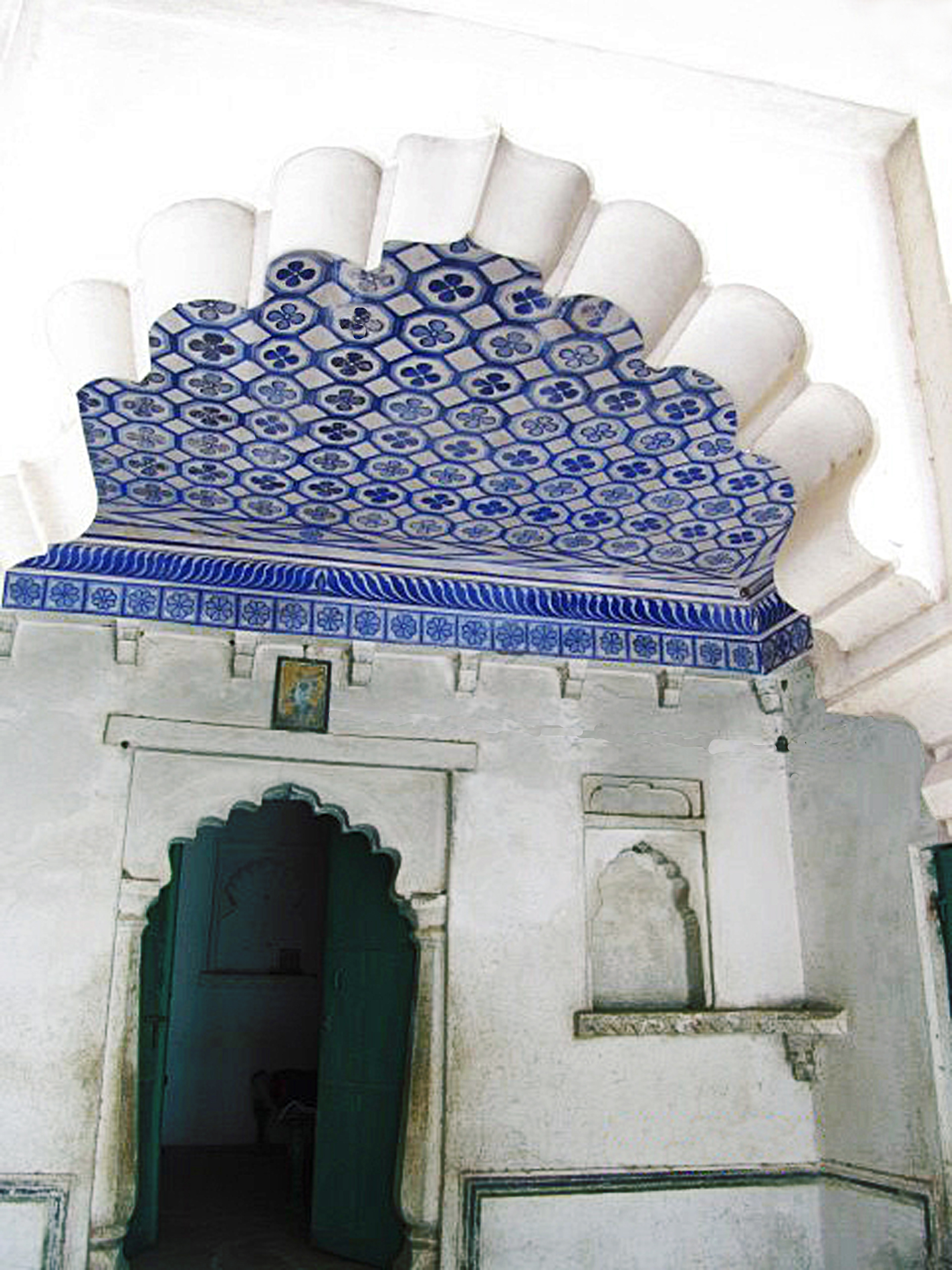 The seepage issues have been resolved and some of the original artworks inside have also been restored. The rooms too are also nearing completion.

Now that the place is enclosed, they plan to start a community-run kitchen garden project soon.

Additionally, Priyamvada wants to use her experience in the media to transform Meja into a cultural hub.

This fort will soon become a community run homestay, where the villagers will come together to offer warmth and hospitality to their guests, though there’s still some time for that.

In the meantime, Priyamvada wants to give her native village a complete facelift.